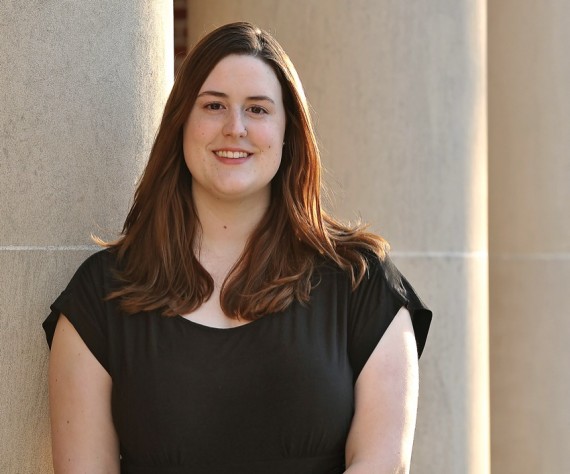 Courtney Gilman ‘15 decided during her first year at Wheaton that she wanted to win a Fulbright award.

“A friend and I ended up at an information session for post-graduate fellowships,” she said. “We were the only freshmen there, as you can imagine. When I heard Dean Trayford talk about the Fulbright, I knew that I wanted it.”

She got her wish. The senior from Mount Vernon, Maine, will spend the next year living in Germany, teaching English in a secondary school and immersing herself in the country and its culture.

“I am just so completely over the moon right now,” said Gilman, describing her reaction to learning that she had won a Fulbright English Teaching Assistantship. “It’s an amazing feeling.”

The award is the culmination of years of study that began well before she enrolled at Wheaton.

“I started studying German when I was in middle school, continued in high school and traveled to Bremen to live with a host family for a month when I was fifteen,” said Gilman who holds a Trustee Scholarship and the Dale Rogers Marshall Scholarship. “It was an unforgettable experience and it really sparked my interest and love of Germany.”

When she arrived on campus, Gilman said she came with the intent to explore, “dreaming of distant places and discovering all that I could see and do in my lifetime.”

She chose to follow her interest in women’s and gender studies, then added international relations and German studies to her academic plan, resulting in her status as a triple major.

“I traveled to Regensburg to study abroad for seven months last year,” she said. “Spending seven months there really solidified my love of Germany and my desire to become truly fluent in German someday.”

Gilman expresses a great deal of appreciation for Germany’s history and culture. While the country shares similarities with the U.S. as a developed Western nation, its differences fascinate her, particularly those that reflect alternative perspectives on the world.

“Americans often have this misconception that Germans are cold or unfriendly, but in fact, German culture doesn’t mandate that everyone needs to be outwardly friendly all the time, so when people are genuinely friendly you know that they truly care for, and about, you.”

Her broader interest centers on building a career advocating on behalf of women, children and families around the world, with a non-governmental organization such as the United Nations. “As a triple major, I truly view my majors as a cohesive unit … a powerful platform that will allow me to work internationally on the issues that I care most about.”

She connected her trio of interests through a series of internships she held during her college career. Gilman volunteered at women’s organizations in both Bhutan and Germany. In the U.S. she has worked for the Family Violence Project in Augusta, Maine; the Women’s Fund of Rhode Island in Providence, RI; and the Feminist Majority Foundation in Arlington, Va.

On campus, Gilman is active in a variety of organizations, from the Feminist Association of Wheaton and the Sexual Misconduct and Assault Response Team to the Center for Global Education’s peer advising program and the Wheatones, one of the college’s a cappella groups.

“The thing that’s been most important to me while being at Wheaton is to really take advantage of every opportunity that is available to me and make the most of my time here,” she said, citing her status as a first-generation college student.