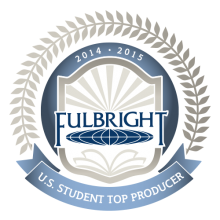 The newly named Fulbright winners will travel to Bulgaria, Germany, Macau, Malaysia, Mexico, the Slovak Republic, South Korea, Sweden, Taiwan, Turkey and Uruguay where they will teach English in local schools or universities and immerse themselves in the countries and cultures in which they are living.

The recent flurry of Fulbright grants awarded to Wheaton students comes just weeks after the college was named for the tenth consecutive year to a list of the nation’s top liberal arts colleges in preparing students to win U.S. Fulbright awards. Nine Wheaton students won Fulbrights in 2014, and they are living and working in Brazil, Bulgaria, Greece, Malaysia, Moldova, Panama, Poland and Taiwan.

The Wheaton candidates awarded Fulbrights so far this year are:

Clancy Connolly ’15, an anthropology major and double minor in East Asian Studies and Hispanic Studies. She will teach English at a university in Macau, one of China’s two Special Administrative Regions. The Scarborough, Maine resident spent a semester studying Spanish in Mexico. On campus, she has served as secretary and president of the Asian Student Association and is a member of Supporting Wheaton’s English Language Learners (SWELL).

Jonathan Gerkin ’15, a double major in English and philosophy. He will head to the Slovak Republic to teach English. The resident of Greenwich, Conn., has previously studied at Trinity College in Dublin, Ireland, and taught English as a volunteer for a nonprofit in Peru. A member of the national honor society Phi Beta Kappa, Gerkin hopes to pursue a career in teaching and academia, and he plans to seek a Ph.D. in medieval literature following his Fulbright experience.

Courtney Gilman ’15, who will earn a triple major in German, International Relations and Women and Gender Studies. She will be teaching in Germany. This will mark her third stay in the country. The resident of Mount Vernon, Maine, previously lived in Germany as a high school exchange student and studied at the University of Regensburg for the spring semester of her junior year. A Trustee Scholar at Wheaton, Gilman hopes to pursue a career advocating for women’s and children’s rights.

Leslie Gould ’15, a double major in Hispanic studies and psychology. She will live and teach in Mexico. A resident of Ashburnham, Mass., she has studied abroad in Granada, Spain, and participated in a short-term Wheaton course to Tanzania that includes teaching and community service experiences. A Balfour Scholar at Wheaton, Gould intends to pursue a career in teaching and global education.

Delanie Honda ’14 has been awarded a Fulbright English Teaching Assistantship. She will head to Malaysia in the fall. Honda, an English major from Victoria, Minn., has a love of travel that has led her to visit several countries in recent years, including Scotland, where she studied during the fall semester of 2012 at the University of Edinburgh. At Wheaton she was very involved in campus life as a tour guide, career services intern, reporter for the Wheaton Wire and a member of the Asian American Coalition for four years, serving as president in 2011. Currently, she lives in Phnom Penh, Cambodia, where she teaches English.

Lindsay Koso ’15, a double major in art history and Latin. She plans to study art conservation and cultural heritage of religious artifacts, specifically icons and mosaics, in Bulgaria. A Davis International Scholar, she has worked with the college’s Permanent Collection, helping to conserve and restore items. She also has helped to conserve works in Italy and Macedonia. Koso intends to pursue an advanced degree in art conservation and restoration after her Fulbright experience.

McKenzie Kuhn ’15, a major in environmental science. She plans to investigate how methane concentrations and fluxes in permafrost thaw ponds in Sweden change over time. An outstanding member of the Wheaton women’s basketball team, Kuhn also intends to teach chemistry and coach basketball as a way to immerse herself in the life of the community. After her Fulbright experience, she plans to pursue a doctorate in biogeochemistry with a specialization in Arctic ecosystems and climate change.

Erika Prince ’15, a double major in education and history. She will be teaching English in Turkey. The Plymouth, Mass., resident is the president of Wheaton’s Education Club and a member of the national honor society Phi Beta Kappa. Currently completing her practicum for licensure as a teacher, Prince plans to pursue a career teaching high school history following her Fulbright experience.

Susan Skaza ’14, who majored in political science and minored in journalism studies. She will teach English in South Korea and hopes to volunteer by offering leadership workshops for students, particularly young women. A Trustee Scholar at Wheaton, Skaza participated in the college’s Weiss Women’s Fellows program and she was active in a number of activities, including serving as a student preceptor.

Elaine Yuan ’15, a double major in education and psychology. She will teach English in Taiwan. The New York City native received a Davis International Fellowship the summer after her junior year, working as an English teacher at a school in Hong Kong. On campus, she has served as vice president of the Asian Student Association and is founder and facilitator of Supporting Wheaton’s English Language Learners (SWELL), a new student organization that helps international students develop their English conversation skills.

Overall, Wheaton’s students have won 88 Fulbright awards from 2000 through 2014. The success of Wheaton’s students in winning the Fulbright reflects the college’s broader achievements in preparing young women and men to excel in earning a wide variety of international scholarships. From 2000 through 2014, 184 Wheaton graduates have won awards such as the Rhodes, Marshall and Truman scholarships.