The free app, LiveSafe, can be installed on iPhone and Android mobile devices and is linked to Wheaton services and resources. Chief Christopher M. Santiago, director of public safety, said the college had initially looked at designing its own app, but the LiveSafe program already incorporated much of what was needed.

“The decision to purchase the app rose out of the Coordinated Community Response Team (CCRT) work being done under the U.S. Department of Justice Office on Violence Against Women grant,” Santiago said. “Ultimately it is another tool in which we can engage the community in being partners in their own safety and acknowledging that they can help without being identified.” 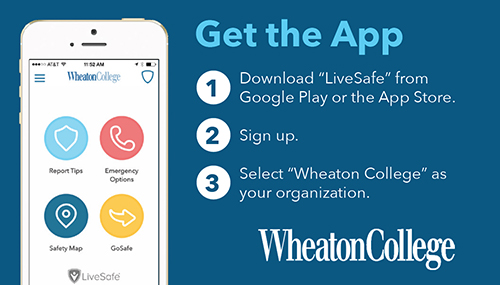 “One of my favorite features is the virtual SafeWalk,” she said. “I hope students will use it when they don’t have a buddy to be with but need to go somewhere. Another great feature is the multiple ways one can report a concern or can submit information about something they saw or heard happen on campus.”

The app, which can be found by searching “LiveSafe” in the App Store or Google Play, has four primary functions. First, individuals can report suspicious activity using the Report Tips function, with the option of sending a text message, photo, video or audio file to Wheaton Public Safety, either from their account or anonymously. Second, they can directly connect with 911 or Public Safety in an emergency.

Another function enables users to initiate a SafeWalk, in which they invite someone from their phone’s contacts to watch as they travel from Point A to Point B (using the phone’s GPS signal) to ensure they get there safely if they have to walk alone. The app also provides Wheaton-specific resources, such as emergency procedures and contacts for organizations both on and off campus, such as the Sexual Misconduct and Assault Resource Team (SMART) and New Hope.

While the tool is primarily designed to promote student safety, it has applications across the community, Santiago said.

“Much of the resource information will be a great tool for faculty and staff working with students or colleagues who are experiencing some difficulties,” he said.

The college will host a launch party for the LiveSafe app on Thursday, October 29 from 9–11 p.m. outside Wallace Library. There will be free giveaways, food and information about how to download and use the app.