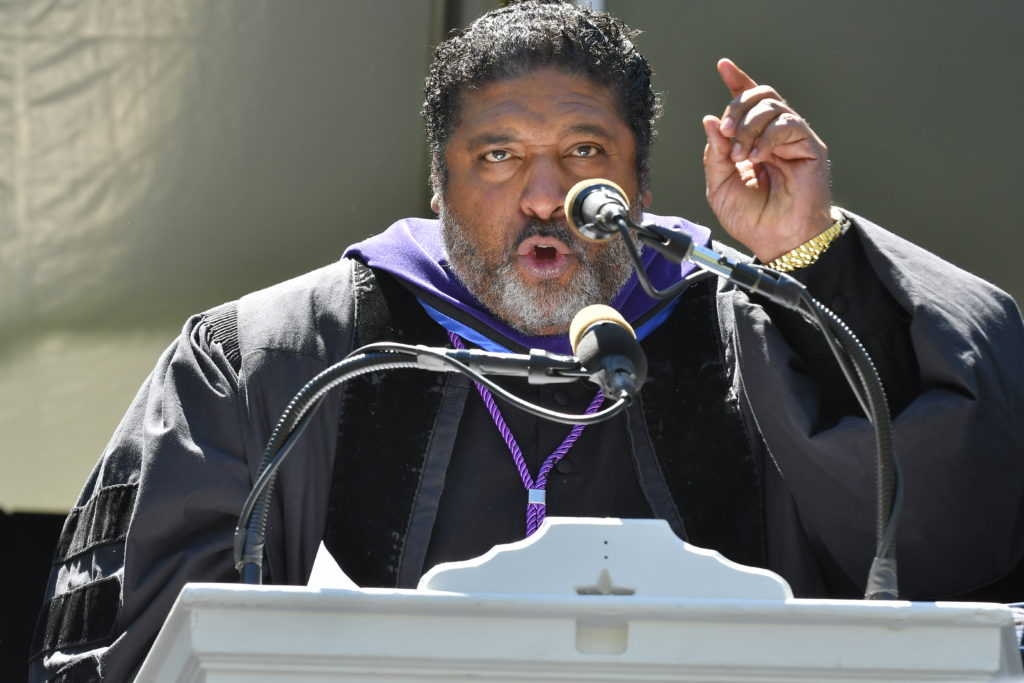 Social justice advocate urges Class of 2019 to get involved

Delivering a Saturday morning keynote address from the podium at Wheaton College (Mass.) with all the passion of a pastor delivering a sermon from a pulpit, the Rev. Dr. William Joseph Barber II, an award-winning social justice advocate, told the seniors that they are graduating into a moral crisis in America and presented them with a critical challenge:

“Class of 2019, I have come today to issue both a caution and a call. And it is that you must graduate today, get up, get together and get involved tomorrow,” Barber said. “America needs you to answer the call, to stand up and stand against those things contrary to life, liberty, the pursuit of happiness, and to be against anything that is trying to destroy anybody’s fundamental human rights. I believe that you must decide how you can be a part of reviving the heart of this democracy.”

On a picture-perfect day at Wheaton College’s 184th Commencement, applause and cheers erupted throughout the wide-ranging speech that quoted scripture, pulled from historical facts, dissected current events and even referenced the words of Chance the Rapper.

Barber outlined the wrongs that graduates should get involved in making right—from helping the poor to fighting against immigration policies that break apart families. And he stressed that this is the perfect generation to make a difference.

“It has always been young people who have stepped forward at moments of crisis in this nation’s history to offer the leadership that can push us toward a more perfect union,” he said.

The pastor of Greenleaf Christian Church in Goldsboro, N.C., and president emeritus of the North Carolina conference of the NAACP, Barber is known for his ability to organize inclusive coalitions across race, gender, age and class to promote and protect civil rights and liberties through a number of initiatives.

He also is co-chair of the Poor People’s Campaign, an effort originally launched in 1967 by the Rev. Dr. Martin Luther King Jr., which seeks to unite people in communities nationwide and give them the tools to challenge systemic racism, poverty, ecological devastation and other key issues.

For the past two years he has been traveling the country as part of his efforts with the Poor People’s Campaign. Barber said that seeing firsthand some of the harshest realities of poverty in the richest nation in the world clearly shows that something must be done.

“Never in the history has there been a generation with so much at their disposal to make a difference. Your parents did more with less. You must do more with more,” he told the 332 graduates.

Barber, who got a standing ovation at the end of his speech, received an honorary Doctor of Laws degree at the Commencement ceremony, along with two alumni honorees: Jeffrey K. Chin ’94 and Bonnie G. Wittner ’69.

Since 2013, Chin has served as chief executive officer at Big Brothers Big Sisters of Central Massachusetts/Metro West Inc., a nonprofit agency that matches disadvantaged and at-risk youth with mentors in more than 42 communities, providing support through meaningful and lasting one-on-one relationships. Wittner was appointed as a judge to the Criminal Court of New York City in July 1983 and promoted to the Supreme Court, Criminal Term, of the State of New York in 1987. She served in Bronx County for five years, then in New York County from 1993 until her retirement in June 2017.

Wheaton College is a private, liberal arts college in Norton, Mass., that emphasizes the combination of rigorous academic study with internships and other experiential learning opportunities for every student. Wheaton students enjoy exceptional outcomes after graduation; 97 percent find success in gaining employment, pursuing graduate or professional studies or earning a post-graduation fellowship within six months of graduation. The Princeton Review named Wheaton to its list of “Colleges That Pay You Back.” The college also has been named a top 50 Liberal Arts College by Times Higher Education and the Wall Street Journal for two consecutive years.