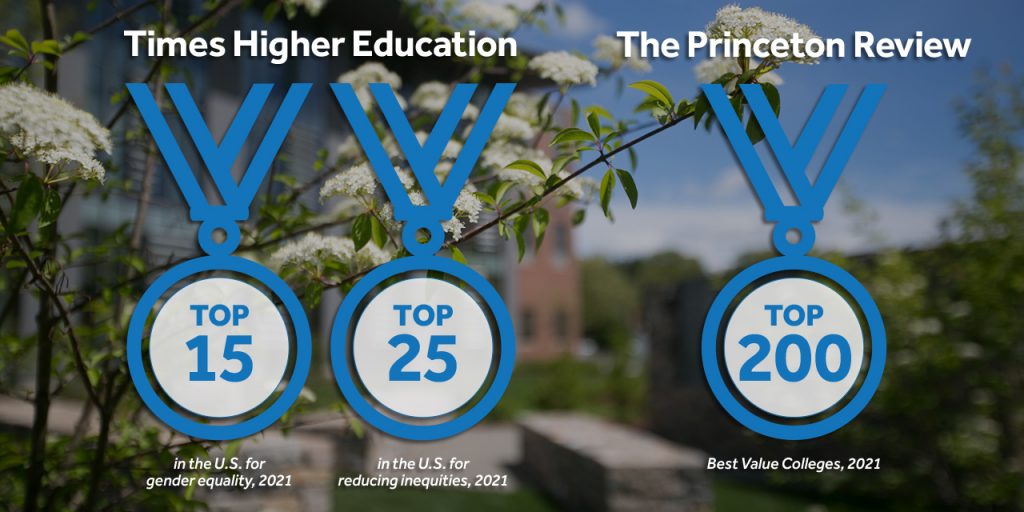 Wheaton College has earned accolades in The Princeton Review Best Value Colleges for 2021 for providing a high-quality education with great career preparation at an affordable price and in the Times Higher Education Impact Rankings for gender equality and reducing inequities.

Wheaton is one of 200 outstanding institutions selected by The Princeton Review Best Value Colleges for 2021, which was released on Tuesday, April 20. The education services company annually names colleges that receive the company’s highest Return on Investment (ROI) ratings.

“They are distinctive in their programs, size, region and type, yet they are similar in three areas. Every school we selected offers outstanding academics, generous financial aid and/or a relative low cost of attendance, and stellar career services,” noted Robert Franek, The Princeton Review‘s editor-in-chief, in a statement about the schools selected.

The ratings are based on analyses that review more than 40 data points. They cover academic offerings, cost/financial aid, career placement services, graduation rates and student debt as well as alumni salary levels and job satisfaction.

Wheaton also received accolades in the new Times Higher Education Impact Rankings that highlight institutions for their positive social and economic impact. The college is recognized as one of the top 15 schools in the United States for gender equality and among the top 25 schools in the U.S. for reducing inequities.

The 2021 rankings, released on April 21, evaluate colleges and universities on their success in delivering on the United Nations (UN) 17 Sustainable Development Goals, which were adopted in 2016 to provide a framework for developing the world in a sustainable way. The UN goals include ending poverty and hunger, promoting good health and quality education, providing access to clean water and sanitation, and other key values.

Wheaton’s commitment to gender equality is rooted in its founding in 1834 as a higher education institution for women. Today, the college is co-educational, home to an increasingly diverse and global student population and a talented team of faculty and staff whose work propels many of the goals outlined by the UN, including gender equality.

The Wheaton curriculum emphasizes many of the key issues addressed in the UN goals, integrating the study of race and ethnicity and its intersections with gender, class, sexuality, religion and technology in the U.S. and globally across all disciplines.

The Times Higher Education Impact Rankings of schools reducing inequities focuses on colleges’ and universities’ research on social inequalities, policies on discrimination and commitment to recruiting staff and students from underrepresented groups, including first-generation students.

The goal of reducing inequities is woven into the fabric of Wheaton College. The commitment is carried out in many ways, including through the guidance of the Strategic Plan; through Diversity, Equity and Access Leadership (DEAL), which works to foster and coordinate leadership efforts across campus to ensure that Wheaton consistently provides a diverse, inclusive, equitable and accessible learning community; through the recent creation of the Office for Institutional Equity and Belonging and the appointment of Shaya Gregory Poku as the inaugural associate vice president for institutional equity and belonging; and through the Low Income and First-Gen Task Force.