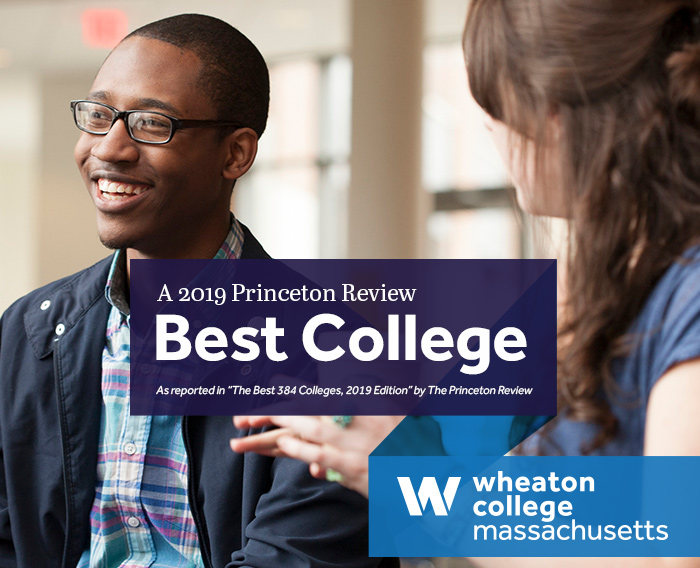 School once again earns spots on Princeton Review lists for top institutions in the U.S., Northeast

Wheaton College has been named one of the best colleges in the country by The Princeton Review, earning a spot in the 2019 college guide, “The Best 384 Colleges.”

The list, announced on Monday, August 6, is based on a survey of 138,000 students across the United States. Wheaton also was named to two other Princeton Review lists, “Best Colleges: Region by Region—Northeastern” and “Best Colleges: Lots of Race/Class Interaction.” This is in addition to Wheaton’s inclusion in the January 2018 release of  “Colleges That Pay You Back: The 200 Schools That Give You the Best Bang for Your Tuition Buck.”

Among the traits lauded by students in the survey were Wheaton’s focus on active learning; an interdisciplinary curriculum that “fosters appreciation for critical thinking, diversity and civic engagement”; engaged professors who are “incredibly knowledgeable in their fields” and “work really hard to put the student interests first”; a “gorgeous” campus, welcoming environment and “sense of community that runs deep”; and the college’s “many great resources for career building,” according to The Princeton Review.

Wheaton is highly rated on a number of national lists, including holding a spot for two consecutive years on the Times Higher Education/Wall Street Journal list of the Top 50 U.S. Liberal Arts Colleges. The school has also been named one of U.S. News & World Report’s 2018 Best National Liberal Arts Colleges, Best Value Schools and in the top 50 as ranked by high school counselors.