Gina Borromeo ’84 is the curator of ancient art at the Rhode Island School of Design (RISD) Museum in Providence, R.I. For the past 19 years, she has been overseeing the Egyptian, Greek, Etruscan and Roman collections.

Yet one fall morning, as she walked from the main lobby to the Egyptian gallery, she often let out a “wow” or “look at this,” reacting to art with the animated joy and curiosity one might expect of a first-time visitor. And when she landed on the sixth floor in front of the mummy known as Nesmin—a favorite of hers and the source of one of her most recent accomplishments—she really lit up.

“What I love about this job is the constant sense of learning,” said Borromeo, who majored in art history at Wheaton and gained experience while a student as a curatorial assistant working with the college’s Permanent Collection. “Knowing that, even as someone who has worked here for 24 years [since 1995], I don’t know everything about the ancient art collection. There is plenty I still need to learn, and that’s the fun part.”

The biggest example of her openness to new ideas and information is the 2,100-year-old mummy, whose body, thanks to her, visitors no longer can see on display. She initiated and took the lead on returning the mummy of Nesmin to his decorative coffin as of November 2018, after he had been exhibited in plain view for 80 years.

The effort, which was inspired in response to questions posed to Borromeo by a RISD M.F.A. candidate’s museum project and a Brown University archaeology major’s thesis about the appropriateness of seeing the mummy out in the open, sparked a great deal of thought and conversation (as well as some media attention) regarding whether a body is art to display.

“There was this growing feeling that a body—a human body—is not a work of art. And that Nesmin is entitled to the rest that he deserved because we interrupted his burial,” Borromeo said. “I felt that it was time to just make it right. After intense conversations with members of the museum staff, I decided to put Nesmin’s mummy back in his coffin instead of continuing to display the mummy beside the coffin. … I think about it as being responsive to questions and issues, being responsive to things going on around us. … Just because this is the way it has always been done, just because American museums still consider it normal to show Egyptian bodies, doesn’t mean we have to continue doing it.”

Borromeo’s path to the RISD Museum began at Wheaton, where she first fell in love with Greek art in then-professor Roberta Olson’s class.

“I thought then, oh my gosh, this is absolutely amazing stuff. It was Greek art that really captured me initially—the idea that you can learn so much about a culture from the visual material it produced,” Borromeo said. “I was looking at pieces created by people who lived so long ago. It was very exciting for me. It feels strangely like home now that I’m working with Greek art again, because I’m always in touch with how I got started. It was that class with Roberta Olson that really made me think, you know, maybe I could go on to graduate school and learn about this material. Wheaton gave me a great education in art history.”

Wheaton Professor Emerita of Art History Ann Murray recalled that Borromeo began as a science major and then switched. “It was a bold move on her part,” Murray said. “She had a lot of catching up to do in a brand new discipline. I remember her being a real trouper and never a complainer. She did very well and is a real credit to Wheaton’s art history program.”

Now, the curator is the one inspiring curiosity among art students and other museum goers. “I’m the caretaker for a collection of 2,300 objects,” Borromeo said in describing her role. “I make sure that they’re well-conserved. I do research on them. I talk about them in educational contexts. I also try to glean from these objects things that are applicable to the world around us today. So, I try to seek out the relevance of the past to the present.”

As a way for us to get to know her as well as see the results of her work, we asked her to walk us around the museum and share her five favorites in the collection that she curates. It was like asking her to pick her favorite child (she has two sons in college), but she managed to tell us. What we learned: she is funny, wise and a great storyteller. Take a look.

Purchased from newspaper titan William Randolph Hearst, the mummy arrived for exhibition at the RISD Museum in 1938 and had been on display alongside the coffin.

“We put Nesmin’s mummy back in his coffin in 2018. It wasn’t an easy decision to put him back, because it meant there was a possibility that we would actually damage the coffin, which had lain empty for decades,” Borromeo said. “But in the end, we thought it was more important to be respectful of the body. … I’m trying to do the right thing. It’s a larger issue. It’s not just about objects. It’s about respect for another human being. It’s about asking questions such as, would I want my ancestors to be out in view for everyone to see? Is it true that we have to look at a mummified human body in order to learn something about it, or is it enough for me to be able to talk about those things without having the body on view?” 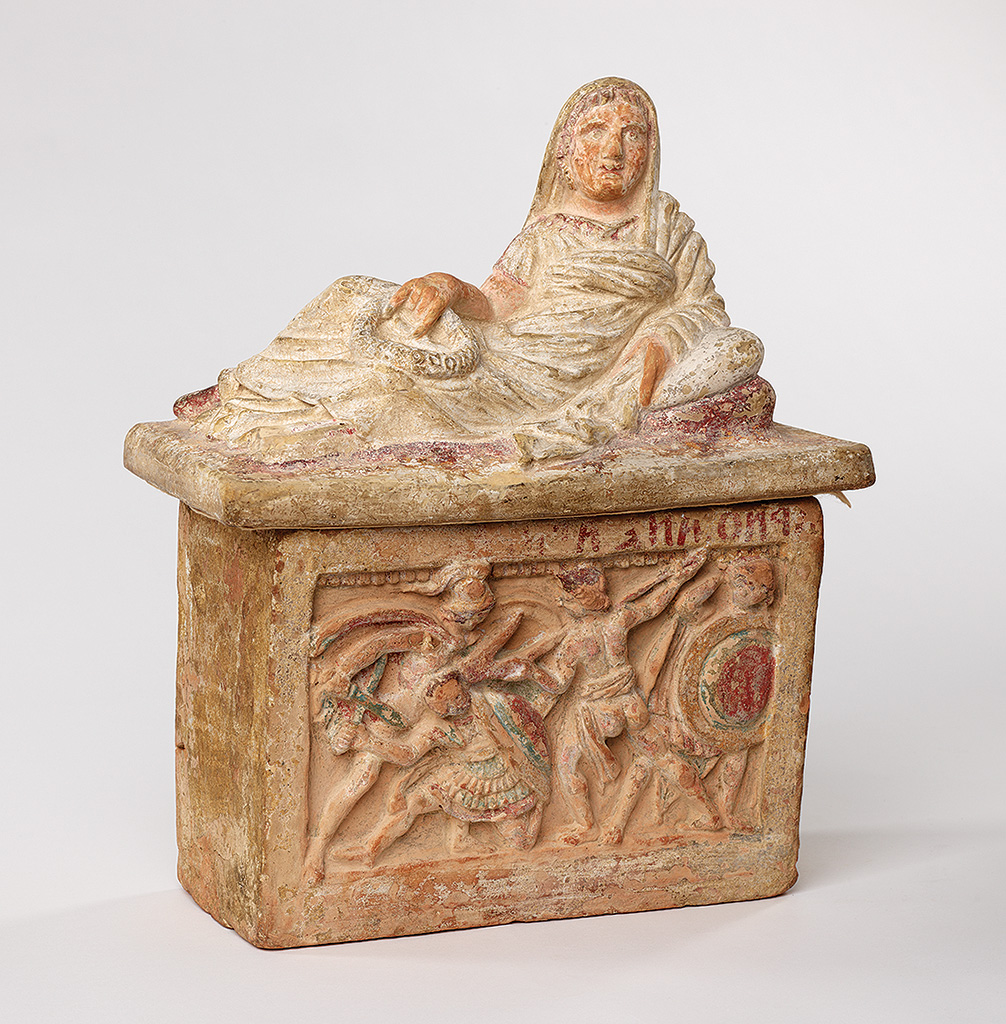 Borromeo has made it a point to address thought-provoking issues inspired by objects, including misconceptions that result from the assumption that Greek and Roman statues are white because coloration has been lost with the passage of time. Her thoughts on the subject were included in the 2018 New Yorker magazine article “The Myth of Whiteness in Classical Sculpture.” The ash urn is a prime example.

“This one is a piece I love. This is an object that I proposed for purchase in 2016, and the reason I was particularly excited about purchasing it is that it still has traces of paint and color on it. I think a lot of us, when we come face to face with works of ancient art like this, have misconceptions. When we look at uniformly white marble statues, we may assume that they came from a time and place that were totally homogeneous. Well, that whole thing is bunk. It’s based on the total misunderstanding of antiquity; these objects were brightly painted in the ancient world. So, this piece, although modest in scale, is one I can always point to and say: ‘Look, things are not always as they seem. Sometimes what we’re looking at are faint glimpses of what they used to be.’ Right? The color, the paint, have faded on all these objects. They are in a state of disrepair. Centuries have passed since these things were made, and things inevitably change over time. We are not trying to take you back to a place of what the original actually looked like, but what I want to show you is the complexity of the history of objects, how they themselves have long histories, like we do, like civilizations do.”

“Painting of the god Heron” “This looks like nothing special, but what’s remarkable about it is that it was painted on wooden panels a very long time ago, about 200 C.E. This painting is one of only four surviving in the world still in its original frame. That wooden frame was made specifically for this painting, and original frames like that don’t survive anymore. We did a lot of scientific analysis and research on it and it’s being shown for the first time here in the RISD Museum. I just put it on view this past year. I love it because it has a story to tell.” 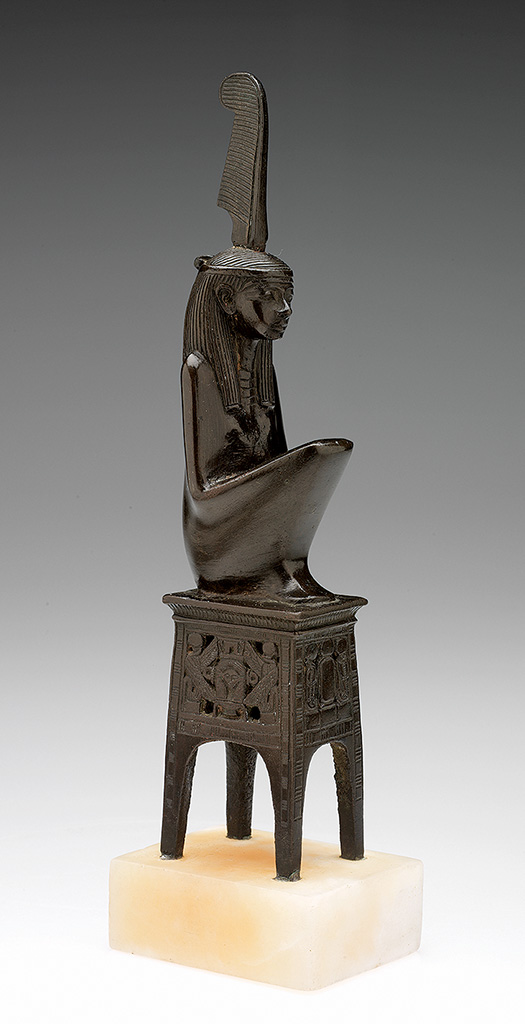 “The goddess Maat in ancient Egyptian belief is the personification of truth, balance, justice and proper conduct. She was central to Egyptian religion; the Egyptians believed at the moment of creation there was chaos, but also there was this concept of Maat—that if you did certain things, then balance could be reached. So Maat was the concept of order that was always present. Egyptians believed that if you practiced Maat, if you maintained Maat in your own life, then all would be OK. … I like the centrality of this figure. That piece is so beautifully made, and when you look at this in profile, what you have is the hieroglyph for Maat, so this is both image and text. What she symbolizes to me. … I just adore her.” 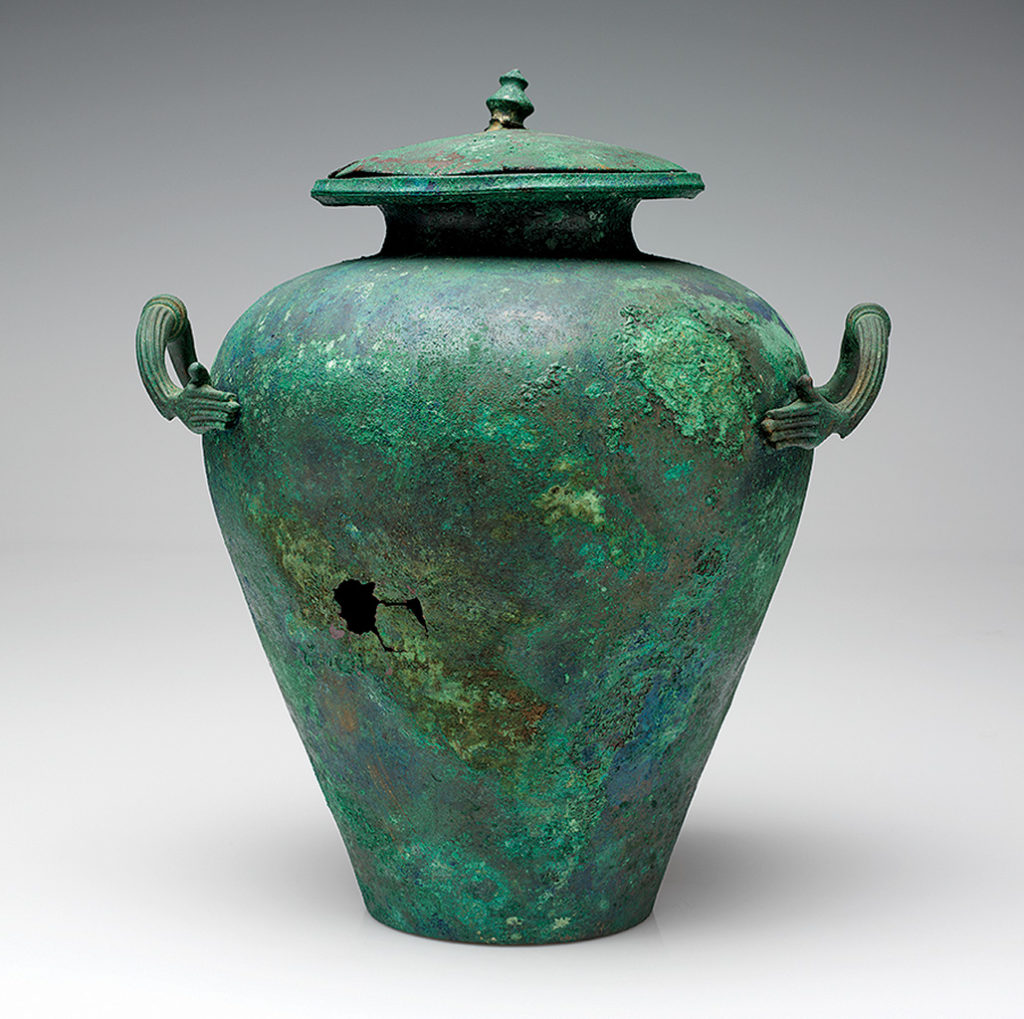 “I really love this Etruscan jar. It was originally made of bronze, and it would have been maybe a warm brown in color originally. Today, the surface is gorgeous, Right? Greens and blues. So, it shows you again the passage of time and what happens to objects when they’re buried underground. But what I love about it is the sense of design—how the artist decided to make hands where your hands would hold the jar. It’s so witty and whimsical.”