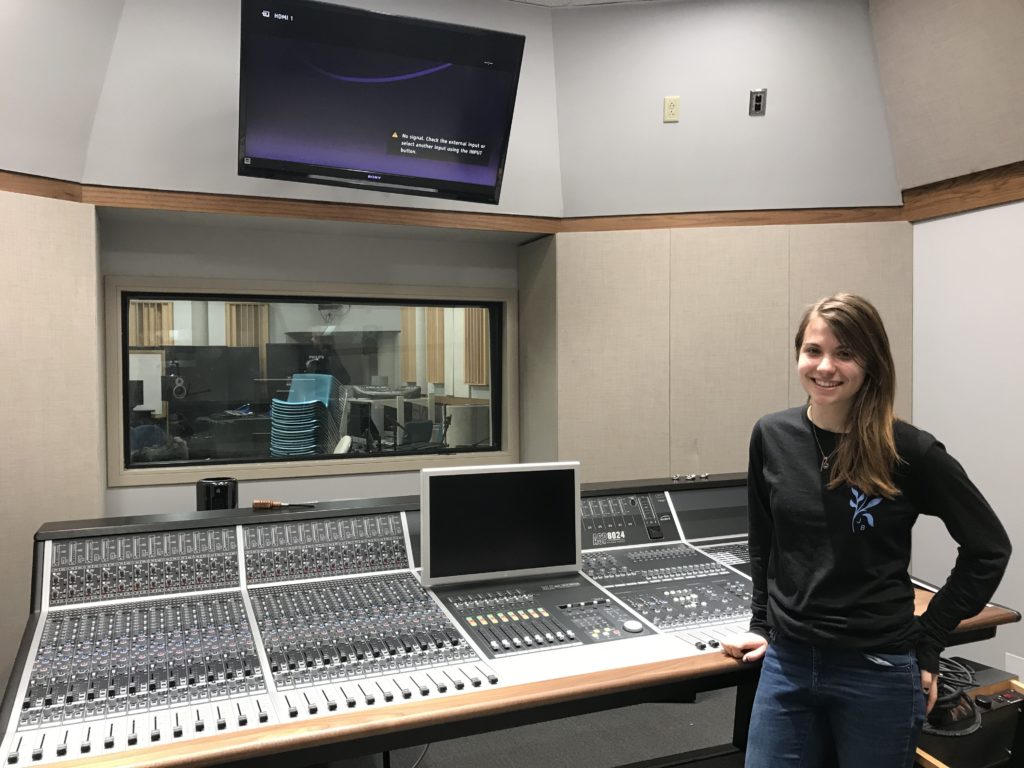 Electrical work: “My main responsibility was helping prep, move and install a new mixer for the recording studio. To prep the space, we had to remove the carpet floor tiles to access the wiring in the back of the room and reroute it to the front of the room. Then, the 600-pound mixing board, which is about 7 feet long, 3 feet wide, was delivered in a large crate. It took planning to get the mixer into the studio space without damaging it.”

Paper speakers: “As part of my internship, I also assisted in the continuation of the STEAM project that showcases the many functions of music technology, including making a paper speaker and recording your voice. The project had been originally designed for college students. I helped repurpose and simplify the idea so it could be used for a community program for kids in first through fifth grade. I made 30 kits of paper speakers for the project and helped prototype a process that was simplified for younger children.”

A moving challenge: “My biggest challenge was helping plan how to get the new mixer safely into the studio. We had to figure out how to load it off the truck, move it into the building, down a level, and then into the narrow studio. The crate could not fit inside the elevator, so the mixer had to be taken out of it in the hallway. We determined how to best position the board onto a trolley so it could be angled into the elevator without any harm. Once downstairs, we found that the mixer did not fit on the trolley through the door. So then we had to remove everything in the way and plan to have six people carry it into the room. This had to be done as quickly as possible as it was very heavy. There were carpenters there to make sure the people assisting were safe, and we were there to make sure no damage was done to the board. Besides a few scratches that were buffed out, the board make it safely into the room.”

Playing with sound: “My favorite moment at this internship was seeing students from the college experience the new mixer for the first time. They came in with such excitement to experiment with the new board. Also, I enjoyed the excitement of the professors to have this great new tool for themselves and their students. I felt honored to be part of this process and contribute to something that will be there for a long time.”

Merging physics and technology: “This fits into my educational experience from Wheaton in that it has given me hands-on experience with physics (my minor) and music technology. I took the knowledge I learned in classes at Wheaton and applied it to my tasks. The paper speaker project, for example, is a simple science experiment involving the interaction of copper coils and a magnet to produce sound.”