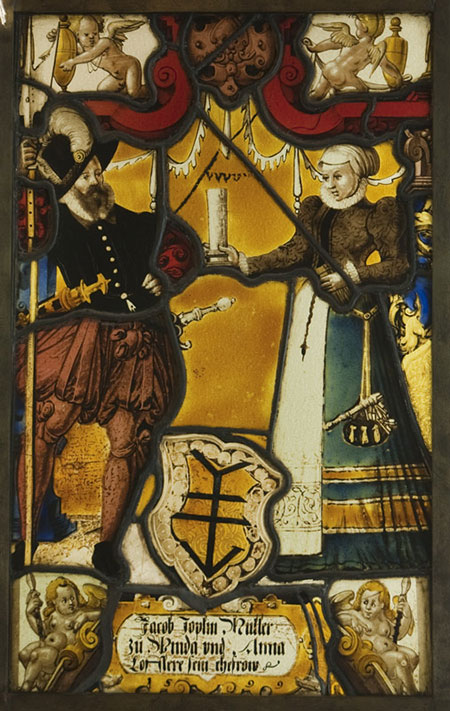 Object ID: 2002.100
Creator: Unknown
Title: Wedding Panel
Date: 1599
Culture: Swiss
Dimensions: 13.1 x 8.3″
Materials: Glass, paint, lead
Credit: Gift of Trustee Emeritus Edgar Eisner and Lucky Dallo Eisner, Class of 1953.
Provenance: March 1991, purchased by the Eisners in Switzerland.Due to the Reformation, the production of monumental panels of stained glass for ecclesiastical purposes largely ended. Later in the sixteenth century, armorial panels like Wedding Panel, filled the void for glass-making. Imprinted stained glass became a common means by Swiss families engaged in self-fashioning and made their identities publicly visible. Small in scale, such panels were commissioned by wealthy patrons to be placed in their homes. They advertised the status of the patrons and their pride for family and town. Armorial panels typically show a couple posed on either side of their family shield over a dedicatory inscription. In this panel, the husband stands in parade dress, holding a halberd, with a small dagger in his belt and a sword at his side. His stance suggests his nationalism and pride in his country, as Switzerland then allowed citizens to carry arms in public. His wife prominently displays her purse and keys, signifying her ability to manage a household. She also holds a candle to represent the matrimonial relationship she shares with her male counterpart. Wedding Panel was featured in the exhibition The Art of Intellectual Community: Early Modern Objects and Pedagogy in Wheaton’s Beard and Weil Galleries and is now on display in the Watson Fine Arts building. Permanent Collection student employees are currently working to translate its inscription, as well as those found on other panels donated by the Eisners.