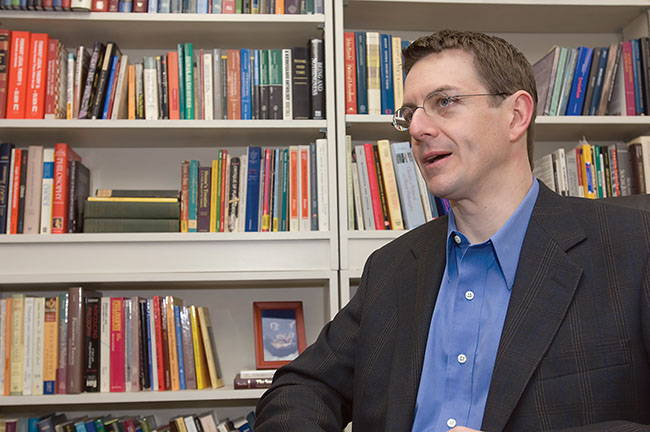 Judges constantly make important decisions: that is, after all, their job. But ever wonder how they arrive at that decision? Or why? For more than a decade, Associate Professor of Philosophy Stephen Mathis has been teaching a jurisprudence course called “How Judges Reason,” helping students decipher the many influences on judicial opinions. Every year, new cases filtering through the American legal system keep the curriculum fresh, and writer Abe Stein caught up with Professor Mathis to see how recent Supreme Court opinions on high-profile cases have impacted his course.

How do you incorporate contemporary legal cases into the curriculum?

Almost as long as I’ve been teaching the course, I’ve had at least one assignment, usually a good-sized paper, that asks the students to read the briefs for an undecided case that has been argued in front of the Supreme Court and to use the jurisprudential theories we’ve studied to decide the case themselves. I try to pick interesting cases, and the high-profile ones like the Hobby Lobby case this past spring tend to be good ones to choose. Hobby Lobby would have been an even better case for the students if we had all known that officials at the other Wheaton College would play off of the decision the way they did. Officials at the evangelical college in Illinois had asked for an injunction so that they would not have to fill out the form to petition the Department of Health and Human Services for the exemption all nonprofit religious institutions can get from the contraception coverage mandate within the Affordable Care Act [ACA]. In the Hobby Lobby decision, the court cited the availability of the exemption the other Wheaton College was unhappy about as a reason for thinking that the ACA’s treatment of Hobby Lobby had failed to use the “least restrictive means” for administering the law. In short, the court thought that the options available to institutions like the other Wheaton were less restrictive or impinged less on individual religious views than what was being asked of Hobby Lobby, and the majority of the court did not see why an exemption similar to that afforded to nonprofit religious institutions couldn’t apply to corporations like Hobby Lobby as well. This makes the whole ACA possibly more problematic from a religious freedom perspective, which would mean that the implications of Hobby Lobby and the cases that will follow it are much greater. I think my students would have enjoyed talking about the Wheaton College injunction, even though it involves the other Wheaton.

Has teaching the class impacted your own research?

The majority of my research is on action theory within the criminal law and not on jurisprudence per se, but as a result of teaching this course on a regular basis, I have gotten into the habit of following the Supreme Court very closely. This has made me much more aware than I would have been otherwise of overall case law that might be relevant to my area. Beyond that, though, teaching this course has led me to write a few op-ed pieces over the years on topics such as John Roberts’s judicial philosophy, Second Amendment rights, health care, and warrantless electronic surveillance. Doing that allowed me to write for a broader, non-academic audience and to contribute to important debates via different newspapers.

Do student opinions of the judicial process evolve throughout the semester in the class?

Most of the evolution I see is in the students’ appreciation of how enormously complicated and nuanced the process can be for deciding hard cases. Once they recognize this fact, they start to see that politics is not behind every decision. But thanks to an increased appreciation of the complexity and the subtlety of the process, they also come to understand the many ways judges (or justices) can have their political or moral leanings influence their view of a case. So the students often come in rather cynical about what judges do, seeing it as a purely political endeavor, and they tend to leave the course cognizant of the hard work judges do, even if that gives the students insight into the less-direct ways politics actually inform how judges decide cases.

What current issues are you looking forward to discussing with students in your next course?

To some extent, it’s difficult to predict what the hot-button legal issues are going to be within a given semester, so you just have to be ready for whatever comes. But I expect that we have not seen the last of the cases bearing on the rights of corporations. Citizens United changed the landscape significantly, and Hobby Lobby added a little something to that new scene, but there will certainly be other cases about the rights of corporate entities in the near future. The other issue I expect will still be relevant when I teach the course again is abortion and women’s reproductive choice more broadly construed. Many states have passed laws that make it effectively impossible for clinics to remain open, and those laws are just starting to get challenged. And as Hobby Lobby made clear, contraception is still a political lightning rod, with religious groups driving the issue. But there’s a growing libertarian sentiment within American politics that seems to be something of a wild card in how these issues play out eventually. In the short term, though, I expect that the court will continue to hear cases that bear on women’s reproductive choices, and I expect their decisions in those cases to be significant, both legally and politically.