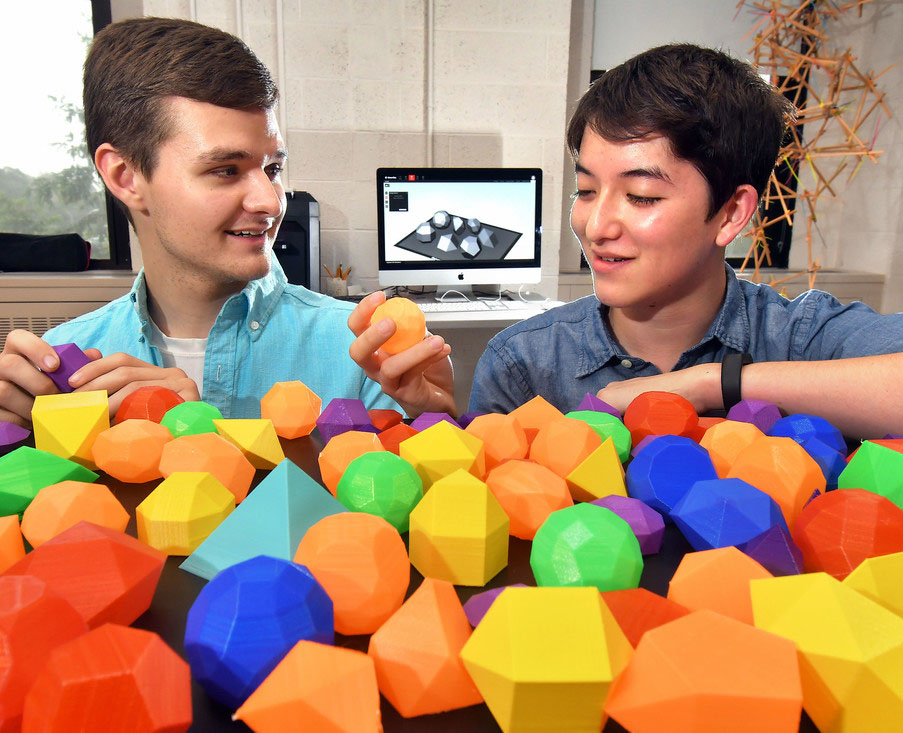 The Johnson Solids can be hard to wrap your mind around, but now you can put your hands on them easily, thanks to Mathew LeBlanc ’20 and Eammon Littler ’20, who have printed 3-D models of all 92 shapes.

The two sophomores spent three weeks using the 3-D printer in Lab 213, the newest makerspace in the IMAGINE network, to produce the full set of convex polyhedrons that are named for Professor of Mathematics Emeritus Norman Johnson, who passed away in August 2017.

“It’s just a really nice thing to be able to look at and pick up these shapes,” said LeBlanc, who is majoring in computer science and physics. “They are a physical representation of Professor Johnson’s work and accomplishment.”

The students are finishing their work at just the right moment. The college will be hosting a celebration of the professor’s work just before the annual Norman Johnson Lecture on Mathematics on Wednesday, September 27.

In 1966, Professor Johnson identified 92 convex polyhedra that, unlike Platonic and Archimedean solids, are not uniform, and he conjectured that there might not be any others. His theory was proved three years later by another mathematician.

In discussing his work, Professor of Mathematics Rochelle Leibowitz said, “Plato identified five solids. Archimedes identified 13 others. Norman has them both beat with 92 solids to his name.”

A Platonic solid is a symmetrical shape, such as a cube; an Archimedean solid would be a more complex pattern, like a truncated icosahedron (think soccer ball), which is composed of pentagons and hexagons. One of the simplest Johnson solids is represented by the pyramids in Egypt, which are made of four triangles and a square, Leibowitz said. From there, the shapes become far more complex, she said, noting that Professor Johnson identified them by drawing each one by hand.

“Some of the Johnson solids differ only slightly, and they can be hard to tell apart,” said Littler, who is majoring in physics and intends to enter the dual-degree program in engineering that Wheaton offers in partnership with Dartmouth College. “And the names are complicated—one is called a gyroelongated pentagonal bicupola—so we haven’t memorized them all.”

The idea for the project started with Professor Leibowitz; the two students got involved at the suggestion of Professor of Computer Science Mark LeBlanc (no relation to Mathew).

“We had been asking Professor LeBlanc for projects to do that combined computer science, mathematics and technology,” Mathew LeBlanc said. “We’re both interested in making things and in 3-D printing.”

In addition to being time-consuming, the process is not easy. The two students have had to experiment a bit to produce shapes that were reliably sturdy and uniformly smooth. Some of their earliest efforts needed to be re-printed. But that tinkering is part of the attraction of taking on the project.

“I’ve always wanted to have the freedom to work on my own design and then be able to produce it,” Littler said. “My end goal is that I want to be able to design and make things that I can use on a daily basis. This has been a good opportunity to practice some of the skills involved in 3-D printing”