A Wheaton education is well worth the investment, according to the latest edition of The Princeton Review’s “Best Value Colleges.”

Wheaton was once again included on The Princeton Review’s annual unranked list of the top 200 colleges for ROI (return-on-investment), which was released on Tuesday, February 4. The list is based on a combination of institutional and student survey data, including sources such as PayScale.com, and evaluates institutions based on their academic rigor, affordability and career outcomes for graduates. 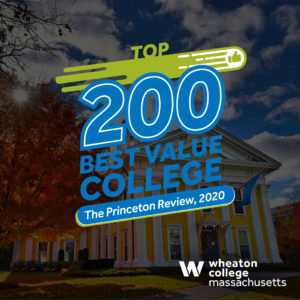 “Students who attend these schools don’t have to mortgage their futures to pay for their degrees—and we believe they will graduate with great career prospects,” Princeton Review staff wrote of the list.

In August 2019, The Princeton Review recognized Wheaton in its “Best 385 Colleges 2020 Edition” and named Wheaton one of the top 20 schools in the U.S. for the quality of its science labs and the inclusiveness of its campus community.

“We are honored to again be included on this list. The recognition highlights our focus on providing a distinctive liberal arts education that leads to successful outcomes for our graduates as they pursue their career goals or post-graduate educational opportunities,” President Dennis M. Hanno said. “That success is due to a number of factors, including our excellent faculty as well as our emphasis on experiential learning through internships that allow students to engage in the world of work well before leaving campus.”

Among other accolades received this fall, Wheaton was once again named a Top 50 U.S. Liberal Arts College by the The Wall Street Journal and Times Higher Education; was included in U.S News and World Report’s “2020 Best Colleges”; and was named a “best value” college by U.S. News and World Report, Forbes, Kiplinger’s and Money.