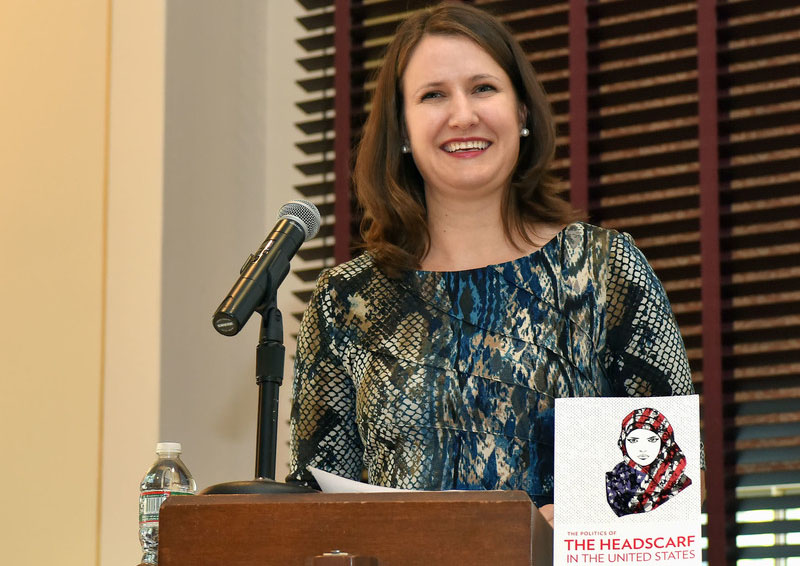 Muslim women in America today are exercising their right to freedom of religion and expression in modern and traditional ways, from choosing to wear the hijab to running for political office. Assistant Professor of Political Science Aubrey Westfall offers insight into the civic engagement of this population in recent newspaper and radio commentaries.

On October 12, Westfall appeared on the syndicated radio show “The Academic Minute,” which is produced by WAMC Northeast Public Radio with support from the Association of American Colleges and Universities and features a different professor daily, sharing new and exciting research.

Westfall is a primary author of the book The Politics of the Headscarf in the United States, published in May 2018. The book draws on responses from about 2,000 Muslim women across the country about their experiences wearing the religious headscarf.

Among the authors’ findings is that, contrary to a common assumption that women are forced to wear the headscarf, an overwhelming number of women choose to wear the headscarf “as an expression of personal and collective religious and cultural identity and an exercise of their civil liberties,” Westfall says in the radio show.

“These women embody a contradiction,” she says. “They experience a sense of precarious membership in American social and political identity, while simultaneously enjoying full legal protection for their religious practice.”

On Monday, October 15, a commentary Westfall wrote with book co-author Bozena Welborne was published in the New York-based newspaper Albany Times-Union. Titled “With Muslim American women on the ballot, we all win,” the piece outlines some of the most recent political gains Muslim American women have made in state and national races and asserts that these candidates are “especially powerful symbols for the potential of our future democratic society.”

“Indeed, the campaigns and elections of members of marginalized minority groups are a win for all of us, because they represent potential for a healthier diverse democracy that can rise above the recent public expressions of white supremacy in America,” Westfall and Welborne write.

Even those who ran but did not win their primaries have an impact on the system, the authors note, saying that their presence on the ballot is “a symbolic victory for inclusion.”

Westfall also recently spoke to an audience at Wheaton about the political implications of wearing a headscarf, at the library’s inaugural Faculty Scholarship Speaker Series on September 27.