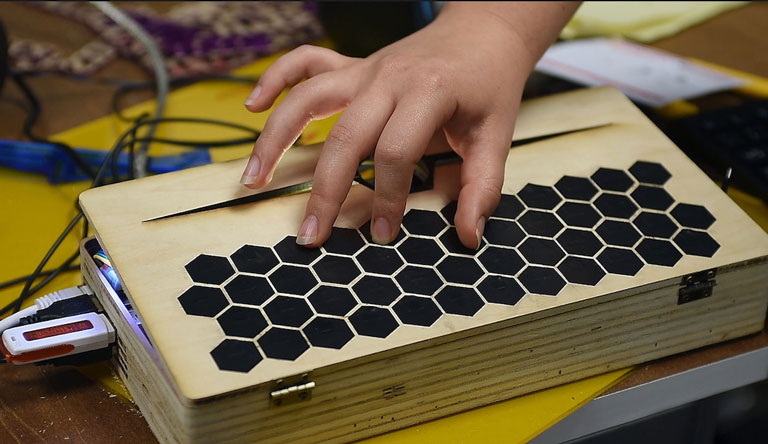 Most musical instruments are the products of time—the result of cultural evolution and traditions passed down over generations.

Liam Grace-Flood ’17 created a new instrument in one summer with the help of another Wheaton student and faculty from the computer science, music and physics departments.

Known as “Hexba,” the instrument features three rows of hexagonal digital touchpads that produce tones—whole, half and in between—and relate with the pads surrounding them to form a variety of scales. A dial at the top of the instrument enables the player to switch between scales and adjust volume, with colored lights to indicate these changes.

“It’s been a huge learning experience not just in the music theory of figuring out how to arrange notes but also in changing the quality of those notes and sounds,” said Grace-Flood, a double major in studio art and mathematics who is pursuing a dual engineering degree through Wheaton’s partnership with Dartmouth College. “Professor [Jason] Goodman and I spent a lot of time figuring out how to mathematically create tones. All of the sounds that the Hexba makes were created by a calculator in the computer, so figuring out what parameters to give it to translate these numbers into a sound that’s going to lend itself to music has been really interesting.”

The project began last spring when Grace-Flood and Sophia Darby ’17 asked Goodman, a physics professor, computer science professor Tom Armstrong and music professor Matthew Allen to form an IMAGINE faculty-student special interest group (SIG) with them. IMAGINE, short for InterMedia Arts Group Innovation Network, is a campus-wide effort to integrate technology and the arts. It is supported by a $500,000 grant Wheaton received in August 2014, which is being used to purchase new equipment, develop new courses and encourage collaborations like this one.

The students’ goal was twofold: to develop new musical instruments using technology and to renovate the college’s recording studio so they could record music made with those instruments and open the studio to other students.

“Both of us have always had an interest in music and technology and how they work together. I remember having conversations with Liam our first year about the possibilities—what could we do, what could we work on,” said Darby, a double major in music and religion. “The SIG helped us to realize things that had been stirring for a while.”

Allen, who had heard about the WHALE Lab’s 3D printer during faculty meetings but had never seen it in action, thought the project would be a fascinating way to explore music theory in a new way.

“The process of invention has been very striking to me. You experiment, push it aside, experiment again. We’ve had lots of little historical moments during this process, as well as contemporary experimentation moments,” he said.

The students began by brainstorming ideas for using less conventional shapes to create a “new interface for music,” as Darby put it. The first version of the Hexba featured a series of interchangeable hexagon pads, but the attached wires made it a bit unwieldy. Their final version is contained in a lightweight wooden box—made with the laser cutter in Wheaton’s sculpture studio.

“I’m a math and visual art person, so I was trying to think of ways that I could understand music better,” Grace-Flood said. “I think that the piano keyboard, and most of the ways that people usually interface with their instruments, greatly inform the music they make.”

For musicians Darby and Allen, the design part of the project was a chance to create an instrument that wasn’t constrained to Western scales.

“In a way, the piano keyboard encodes a lot of history, but in the sense that one is restricted to that keyboard, it may not be the best way to develop new thoughts, ideas and relationships,” Allen said. “That’s one of the really exciting things to me about this project.”

In addition to building the Hexba, the students experimented with other materials and instruments, using the laser cutter to build a ukulele, harp and lap steel. They also used the 3D printer to create a set of percussion blocks.

“We had so many different ideas. That’s why we came to IMAGINE, because we were both interested in this area and wanted to be free to explore it on our own,” Grace-Flood said.

The grant also enabled them to buy equipment and software for Wheaton’s recording studio, located next to the WCCS radio station in the Balfour-Hood Campus Center. Grace-Flood began working on the studio, which had lain dormant for several years, during the previous spring semester, serving as general manager of both the studio and radio station.

Though both students aren’t on campus this year—Darby is studying in Nepal and Bhutan and Grace-Flood is working on his engineering degree at Dartmouth—their efforts have made the studio available to other students.

For Darby, the Hexba project has taught her how to collaborate with people from different disciplines and find ways to speak the same language. It’s also inspired her to explore her own ideas.

“I know what it feels like to collaborate with people about things that I’m passionate and creative about, and once you know that feeling it’s easier to spark it again in other places,” she said.

Both the students intend to keep working on their ideas. Darby, who has already used the studio to record music with her campus band Hoo:Lumes, hopes to continue using the studio when she returns to Wheaton for her senior year, possibly recording with some of the instruments they created.

Grace-Flood plans to electrify the laser-cut ukulele and lap steel he built, among other ideas.

“That’s something that’s really cool about these IMAGINE projects—I keep finding new ideas that fit perfectly into the umbrella of whatever project I’m doing,” Grace-Flood said. “It’s been cool to have this time and space to begin these experiments, but now that we’ve started thinking we’re just going to keep going.”

The art of advocacy