The next presidential election is two years away, but there are still many reasons to head to the polls this November 4. Wheaton senior Sarah Estrela ’15 is hoping her classmates will embrace those reasons, and she’s encouraging them to do so by leading a voter registration contest among residence halls—with the winning hall receiving a party.

As a sophomore member of the Wheaton chapter of The Roosevelt Institute, Estrela helped organize a voter registration drive during the 2012 presidential election. Now president of the campus group, she wanted this fall to make another push, teaming up with Student Government Association and the Office of Service, Spirituality, and Social Responsibility to develop a contest using an online service called TurboVote.

“Historically, young people do not exercise their right to vote as much as their older counterparts; however, we have so much more at stake,” Estrela said. “The policies Congress passes, or doesn’t pass, affect our chances at getting a job after graduation, our accessibility to affordable healthcare, the amount of student debt we’ll pay back and more.”

While mid-term elections may not receive as much attention as presidential races, Estrela feels it is as important as ever for young people to cast their ballots.

“This particular election season is important because of the inactivity and low approval rating of Congress. It’s because of their inactivity that we’re suffering from the terrible stagnation preventing our country from moving forward,” she said. “Voting is the simplest way to get involved in the democratic process, and we need that now more than ever before. If our leaders won’t take action, we need to elect the people who will.”

Among the races on the November 4 ballot in Massachusetts are bouts for U.S. and state senator and representative, state governor/lieutenant governor, attorney general, secretary of state and treasurer, as well as four ballot questions on the state gas tax, beverage container deposit law, casinos and employee sick time.

The contest, which runs until Wednesday, October 15, invites students to register through TurboVote. Students may choose to vote in Norton by putting in their Wheaton address or may opt to vote in their hometowns by receiving an absentee ballot.

“Students create an account with the website and can fill out their voter registration form through it. Once finished, they can print their form out, mail it, and will be all set. TurboVote even provides the mailing address for where you should send your form,” Estrela explained. “Students will be updated about their registration status via their TurboVote account—and it lasts even past one’s time at Wheaton, so it can be used for information about future elections post-graduation.”

Students who are already registered can use TurboVote to find polling information and election updates, and they can sign up to receive text or email alerts when it’s time to vote.

The Roosevelt Institute’s 2012 voter registration drive was widely successful, bringing in more than 300 new voters and just as many absentee ballot users, Estrela said, and the students leading this year’s charge hope the trend continues.

“It’s important that students engage with the political system, because political participation during high school and college has a strong correlation with continued political engagement later in life,” said Michael Ratliff ’16, a member of the SGA Executive Board. “In keeping with the legacy of the Wheaton alumnae that fought the legal battle to allow voters to submit absentee ballots, we want to take every step necessary to make sure that college students are well represented in our political system.”

Vereene Parnell, associate dean for SSSR, helped secure the partnership with TurboVote and is hoping the voter registration drive encourages discussion and debate among students, faculty and alumnae/i, both on and off campus. 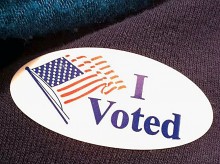 “Data from the last three election cycles show that the youth vote made a critical difference in the outcomes of those elections,” Parnell said. “College students traditionally turn out for presidential elections but neglect the mid-term races. Four years ago, that helped bring a fairly significant sea change to Congress and on that tide unprecedented partisan gridlock. So it is clear that the student vote, or neglect of the polling place, can and does influence national politics.”

Wheaton students can join the competition and register to vote through October 15 by clicking on the link below corresponding to their residence hall to create a free account with TurboVote: