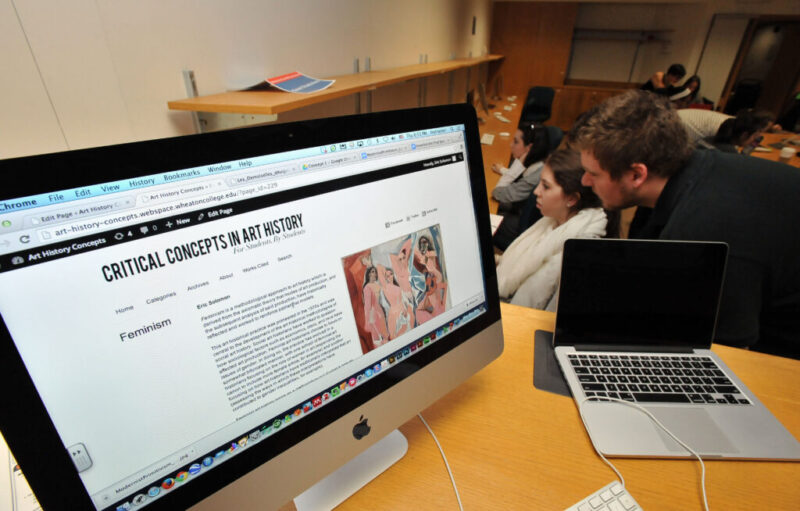 Wheaton’s senior art history majors have completed their undergraduate educations and moved on to what’s next: graduate school, jobs and other opportunities. But before leaving, they built a valuable resource for future students—a website that defines some of their field’s more abstract concepts.

Created by students in professor Ellen McBreen’s spring 2015 senior seminar class, Critical Concepts in Art History: For Students, By Students presents 41 terms often used in art and visual history classes in an easy-to-access online publication. Each term is defined with a well-researched entry, complete with footnotes and accompanied by an image that illustrates the concept. The site also presents all the sources used for the entries in a page of citations.

“When I was designing the senior seminar I thought it would be an impactful learning opportunity for the students to have a publishing experience where they’re writing something that is going to be shared with a larger audience,” McBreen said. “A lot of time when you’re researching and writing papers as a student you don’t have the opportunity to think about a broader readership for what you’re producing.”

In addition to giving students a writing assignment—each was responsible for creating three concept essays—McBreen assigned them various editorial roles: copy editor, marketing, research and others. Learning how to collaborate in those positions was part of McBreen’s overall lesson.

Sarah Estrela ’15 served as an executive editor and wrote essays on modernist primitivism, other/otherness and authenticity.

“It’s been a wonderful, sometimes surprising, exercise in patience and learning about other people’s styles of writing,” she said of the project. “You’re putting your intellectual ideas forward for an audience that wouldn’t otherwise be engaged, so you’re held more accountable, and it’s nerve-wracking sometimes. I’ve been trying to make sure the other students understand that this is not just for an outside audience but for themselves; it’s a learning process for how they can make their ideas accessible for other people. That’s been a learning curve for me, how to galvanize different people.”

Estrela, a recipient of the Beinecke Scholarship, is starting a Ph.D. program in art history at Northwestern University this fall.

Deanna White ’15 is interested in a career in art marketing and found the class helped her develop key skills in that direction.

“The most transferrable skill is to see how can you write in a way that’s going to engage a general audience—how do you make art approachable, how can you write about it in a sense where somebody who’s studying chemistry can understand it or someone who is focusing on athletics,” said White, who wrote essays on psychoanalysis, kunstwollen and archaeology.  “It also helps with learning how to work with people, learning how to collaborate, just trying to come together to make something happen. People take that process for granted sometimes.”

For Julia Dry ’15, who is interested in a career in art sales and auctions, creating a resource for others helped cap off her own education.

“I feel like I’ve taken very specific courses within art history. I can talk about African art or I can talk about different types of architecture, but I hadn’t developed vocabulary on art history in general, which I think is key for a lot of jobs,” Dry said. She was the publication’s head of marketing and promotion and wrote essays on Greenbergian formalism, postmodernism and canon.

The art history majors worked closely with staff from Library and Information Services to find resources, create a bibliography, develop the site and ensure its readability on various mobile devices.

“They’ve been extraordinary,” McBreen said of the LIS crew. “I’ve never had a class project where I’m so dependent upon outside technology resources, so it’s been really crucial. They’ve helped us every step of the way.”

Along with creating a website, the seniors organized and attended a workshop series featuring guest art historians.

“I wanted to give the students a sense of all of the diverse ways that you can take a degree in art history and apply it to a real-world project,” McBreen said. “So we had someone who’s working in museum education talking about digital interpretation and trying to make works of art available to an audience. We had someone who just wrote a textbook, who was trained as a historian and is now working in contemporary art.”

“It’s been really nice to have the speakers come, because I get to see the ways in which people have developed their careers within the discipline,” said Wolf, who wrote essays on modernism, functionalism and typology. “It’s also nice to work on something that’s tangible, that I can show to my future employer.”

“The idea was to remind the art historians that they have these skills of visual analysis and also a historical knowledge, so they can provide the studio art majors with some historical framework for their projects,” McBreen said. “It’s a way of developing their professional skills as well as emphasizing the value of intellectual generosity.”

Critical Concepts can be viewed at art-history-concepts.webspace.wheatoncollege.edu. 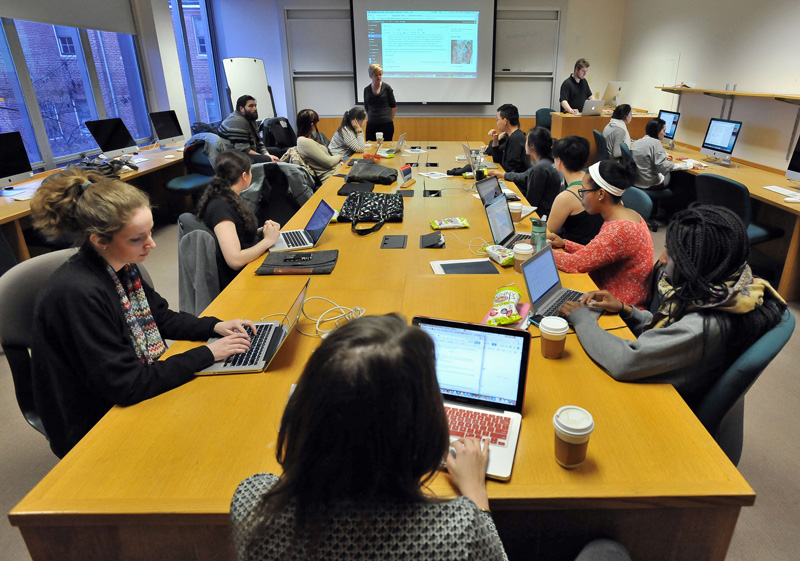