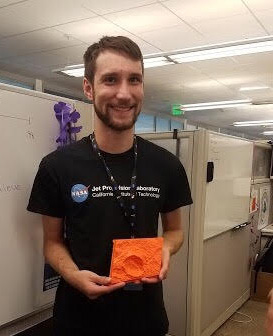 Seeking out opportunity: “The second semester of my sophomore year, I decided that I should do some research on campus. Professor [of Geology] Geoff Collins gave me a paid research position for the summer doing research on plate tectonics on Jupiter’s moon, Europa. Geoff and I wrote an abstract for that research and submitted it to the Lunar and Planetary Sciences Conference (LPSC) and were accepted for a poster session last March. At LPSC, Geoff introduced me to countless names in the planetary sciences community, one of which was a scientist named Cynthia Phillips, who said, ‘You know, I have this internship opportunity that I haven’t found anybody that I like for yet.’ I blurted out, ‘I’d be happy to help with that.’ She told me to apply, so I did, and after waiting a grueling three to four weeks, I was accepted. So, moral of the story: Networking and asking for opportunities—two of your most important resources.”

Summer mission: “I was responsible for comparing the different methods of creating 3-D topographical models of Jupiter’s moon Europa. The goal was to determine the accuracy of each method, so scientists can accurately understand what the surface of the moon is like.”

Dream job: “The Jet Propulsion Laboratory is one of the forefront pinnacle establishments in the aeronautics and solar system research world. It’s always been my dream to one day work at a NASA-funded facility, and quite honestly it was the greatest experience of my life thus far. I loved walking across the grounds, and I would think, ‘Wow, I could be here forever.’ But by far the greatest part of being there was visiting the observation booth of mission control and watching a live feed of data streaming in from all of our currently running space missions.”

Stepping stone: “I hope to go to grad school for planetary science, with the end goal of doing planetary geological research on the outer solar system icy moons. This internship was the perfect segue into my future, as I was already working on the subject of my aspirations—especially with the fact that I learned ArcGIS. That knowledge really gives me an edge above others who don’t know how to work the software.