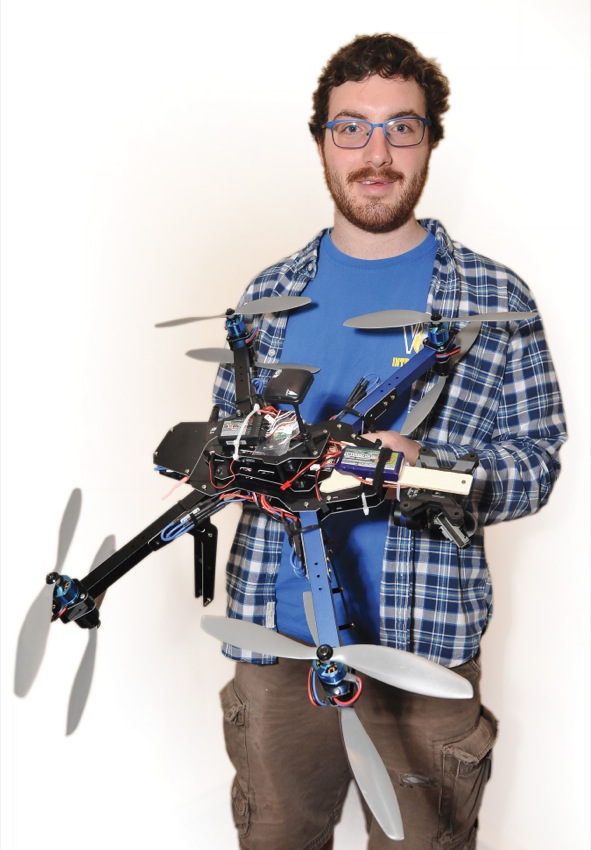 If you look up in the sky while at Wheaton and see a drone, Zevi Rubin can’t be too far away. The computer science major has become known for building (he has seven) and piloting drones, which he prefers to call multi-rotors, because drones get a bad rap. Last semester he was a panelist at Wheaton’s first Drone Camp alongside professors.

Spreading his wings: “I’ve been working with the Film Department since last summer, and I am now training students to fly a Wheaton-owned multi-rotor to use during film projects. I am always excited to spread awareness about UAVs [unmanned aerial vehicles] and some of their uses, and I am excited to work with the school to start developing new uses for the technology. So many people have preconceived notions about what a drone is and what it does. My main goal when showing my work to people is to show them that drones aren’t all bad. In fact, my multi-rotor drones are actually pretty fun.” Taking off: “I started making drones about three years ago. I have always loved remote-control toys, and specifically airplanes. I had even tried getting aerial footage of Vermont’s foliage from one of my remote-control airplanes, but the platform wasn’t stable enough to capture crisp images. I found a few Chinese manufacturers who were starting to make compact brushless motors, the heart of the multi-rotor, and it just went from there.”

Flight plan: “Some of the examples of practical uses for drones that I am interested in are search-and-rescue assistance using thermal imaging cameras to find individuals, and endangered species monitoring with thermal imaging to detect and intercept poachers. Currently, I’m working with the Norton and Bristol County fire departments as well as on a 3D-mapping project using UAVs. I got involved with the fire department after I filmed the Head of the Peacock boat race from my quadcopter. The local station’s dive team was there as a safety precaution and they were intrigued by the technology. They invited me to come to some of their training exercises to show the capabilities of UAVs for rescue work. I have been to two district-wide training exercises with them now, flying once to carry a rope between two cliff faces, as well as collect aerial reconnaissance on the situation, and to allow the commanding officers to keep visual contact with crew members who would ordinarily be operating in unseen territory.”