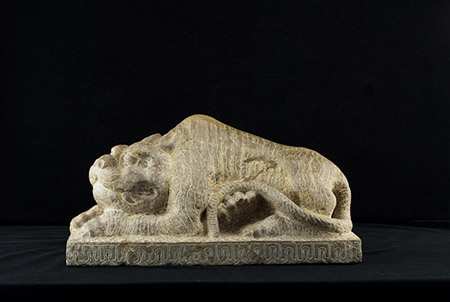 Provenance research conducted by Michael Lethin, Elena Umland, and Weiyi Qian, Class of 2017This marble tiger was a gift from acclaimed playwright Eugene O’Neill to Dr. Harry Kozol, a Harvard Medical School graduate who practiced in Boston. Kozol was O’Neill’s most trusted physician in the final years of his life. During this period, Kozol visited O’Neill almost daily and made frequent house calls. O’Neill died of bronchial pneumonia on November 27, 1953. Dr. Kozol, who sat by O’Neill’s bedside, was the first to announce his untimely death to the public.

The sculpture was exhibited in the Museum of Fine Arts, Boston. It was removed from display when the museum’s staff decided that the tiger was merely a century-old reproduction. O’Neill, however, had once consulted an expert who suggested that the tiger is likely of Ming origin and older than similar statuary due to its small size and lack of intricate detail.

Carved from a slab of gray marble, the tiger rests on its belly in a bed of leaves. With its large snout and flaring nostrils, it shares characteristics of other animal statues found in Ming Dynasty tombs. The Ming Dynasty (1368-1644) is known for its funerary architecture, which featured intricate, often ornate, carvings. In China, tigers symbolize royalty, fearlessness, and wrath, and representations of tigers in funerary contexts are thought to link the deceased’s reputation with these qualities.