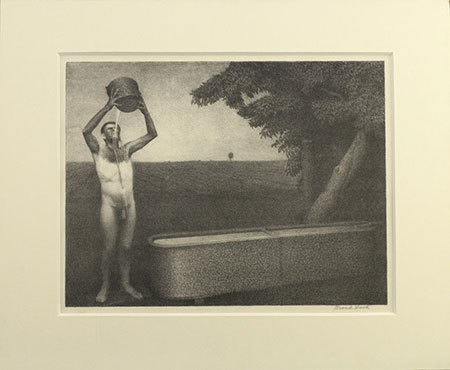 One of the rarest of Grant Wood’s prints, Sultry Night was created in 1937 for Associated American Artists, a Depression-era enterprise that sold original prints by American artists, including Thomas Hart Benton, John Steuart Curry, and Reginald Marsh. Prints were sold by subscription and the company marketed to middle-class households, often engaging them as first-time art buyers. By the late 1930s, Wood was renowned for his work in American Scene or Regionalist painting. During his first year with the Associated American Artists, he created five lithographs. Sultry Night was among this group and was created in tandem with a large-scale painted version, a section of which is displayed above. The original painting was modified by Wood, who cut off the portion displaying the nude male figure; only the remaining section has been found. Wood stated that the image was inspired by childhood memories of farmhands. Wheaton’s R. Tripp Evans, Mary L. Heuser Chair in the Arts, recently published a biography of Grant Wood. He believes that the model was most likely Wood’s University of Iowa colleague Eric Knight, who lived with Wood during the summer months. Following the unveiling of the oil version of Sultry Night in early 1937, the lithograph was created and made available through the Associated American Artists catalogue. Unfortunately, the Postmaster General banned any sales or marketing of the print by mail, claiming that the nudity within the image constituted a form of pornography. Due to the resulting controversy, a smaller print run of Sultry Night was produced, making the work extremely rare and a prestigious edition to the college’s Permanent Collection. 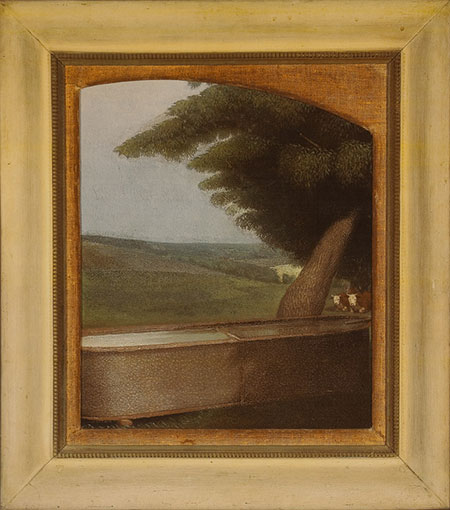