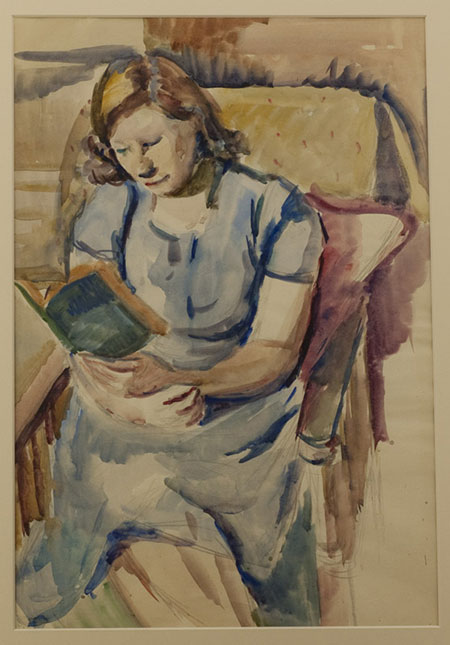 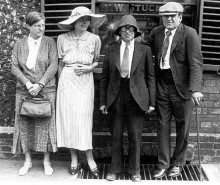 Dorothy Mary Hepworth (1898-1978) and Patricia Preece (1894-1966) are each listed as the artist for Sonya Redway Reading because Hepworth often sold her work under Preece’s name. Both artists, Hepworth and Preece were life partners who met at the Slade School of Art in London in 1918. They established a studio in London until 1921, when they moved to Paris for further study. They returned to England in 1925 and became part of the Bloomsbury Group before moving two years later to the small village of Cookham where the British Modernist Stanley Spencer also lived. Hepworth and Preece’s work received major attention between World Wars I and II. Exhibiting under Preece’s name, they showed at Dorothy Warren’s gallery (London, 1928), Lefevre Gallery (London, 1936), and Leger Galleries (London, 1938). Collaborators in life, they are fittingly buried together in Cookham Cemetery.

During her lifetime, Hepworth allowed her paintings and drawings to be exhibited and sold as Preece’s work. Hepworth was diffident, retiring, shy, and mannish in her style of dress while Preece was fashionable, gregarious, and social. Therefore, Preece dealt with the public and with art galleries and dealers. The couple had fears of being known as lesbians, and sometimes claimed to be sisters. Although Hepworth attempted to avoid the public eye whenever possible, Preece appeared to seek it and became known for her role as the legal wife of and muse to Spencer who became obsessed with Preece and left his first wife and children to marry her. The relationship was an economic and legal one: Spencer provided the lesbian couple with a house and financial support, although he and Preece never lived together nor consummated their relationship. When Spencer was knighted in 1959, Preece identified publicly as Lady Spencer; and upon his death later that year, she claimed his pension as his legal spouse.

The subject of this watercolor, Sonia Redway – the drawing’s title when sold spells her first name incorrectly – lived in Cookham for most of her life. She met Spencer as a girl and soon became a subject for his work, as well as that created by Hepworth and Preece. Little is, however, known about Redway. Student research revealed that she was an active member of the Maidenhead Operatic Society and identified the home in which she lived in Cookham but attempts to contact her failed. A letter to Ms. Redway was returned to sender with a handwritten note from the local postmaster indicating that he believed she had passed away. Images of her as a girl and young woman enable us to see Redway as she was when Hepworth, Preece, and Spencer knew her. Although she is not identified as the subject in either work, a painting of Redway knitting is held at the Newport Museum and Art Gallery in Newport, South Wales and Girl in Yellow Dress, which appears to depict her, is held in the collection of Towner, a contemporary art museum in Eastbourne, England.