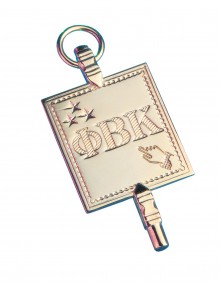 On the 5th of December 1776, five students at the College of William and Mary in Williamsburg, Virginia, formed a secret club. Their motto, “Love of Wisdom: the guide of life”, was represented by the Greek letters Phi Beta Kappa. This initial chapter–with its oath of secrecy, a special handshake, and elaborate initiation ceremony–grew from five to fifty members in its first four years. Though this chapter was forced to close during the American Revolution, its members prepared charters for new branches at Harvard and Yale. These two chapters–the Harvard one in uninterrupted existence since its founding in 1781–determined, during the next few decades, the character and policies of Phi Beta Kappa as we know them. By 1876, 23 institutions had chapters, most of them small liberal arts colleges.

Today, Phi Beta Kappa is America’s foremost academic honor society. After the 42nd Council meeting in 2012, there are 283 chapters of Phi Beta Kappa nationwide, and its living membership exceeds half a million. Wheaton’s chapter of Phi Beta Kappa, the Kappa Chapter, elects academically outstanding juniors and seniors who, upon their induction, become lifelong members of this society and may participate in the activities of the Wheaton chapter, the nearest alumni association, and in the national organization.