Each January, motivated Wheaton students return to campus a week early to develop a business idea through the Social Entrepreneurship Launch Program (SE Launch). This year, that group involved 21 students from a variety of majors, as well as an adult learner. Their ideas included fashion lines to battle the stigma of mental illness, celebrate LGBTQ identity and help the homeless; supporting artists through the sale and design of up-cycled clothing, skateboards and independent film and video projects; and mobile apps to promote political activism, financial stability and smarter media consumption.

Led by the Global Center for Social Entrepreneurship Network (GCSEN), the SE Launch “boot camp” began at the start of winter break, when students took an online course and identified a business idea. Once on campus, they spent a week working on their ideas, attending workshops and lectures, building and refining their business pitches, participating in field trips and working toward a final presentation.

>> See some of the student business ideas

Visiting Instructor of Business and Management C.C. Chapman served as a faculty coach and dean of students for the January 2020 program. He said it was amazing to watch the students, many of whom were not business majors, pack so much learning into one week and to overcome nervousness to deliver confident pitches.

“It was great to see these students take a kernel of an idea and turn it into enough detail to pitch it to a room full of people,” he said. “The students learn a lot of new things, but they also learn confidence, public speaking and working together, which will help them no matter what field they enter.”

Among the staff the students worked with was Vanessa Collingridge, an author and broadcast journalist from Scotland, who served as an “impact coach,” helping students work on their posture and presentation skills.

On the program’s last day, the students delivered three-minute presentations to a group of judges—including Chapman, GCSEN staff and faculty from about 15 other colleges and universities who are interested in bringing a similar program to their campuses. Judges scored the students using an app called Pre, allocating virtual funds to each business as “investors.”

Jenna Palmer ’20 received the highest score in the judging for her business venture “Proof,” a clothing line that encourages conversations about trauma and mental health among first responders.

“The atmosphere that was created at the SE Launch boot camp was one of the most supportive and accepting that I have ever been a part of,” said Palmer, a business and management major who is interested in a career in nonprofit management and philanthropy. “It was nice to be surrounded by people who care as much about your success as they do their own personal success.”

Throughout the spring semester, the SE Launch participants will have monthly web calls with GCSEN staff to check in on their projects. They also can participate in a second week of workshops at the beginning of the summer, in which they will explore the structural side of setting up a business, Chapman said.

SE Launch is offered in partnership with Wheaton’s WiN Hub, which supports student entrepreneurship on campus through workshops, professional guidance and other programs.

“This program showcases why a liberal arts education is most beneficial: It teaches students to think beyond any walls or definitions that might hold them back,” he said. 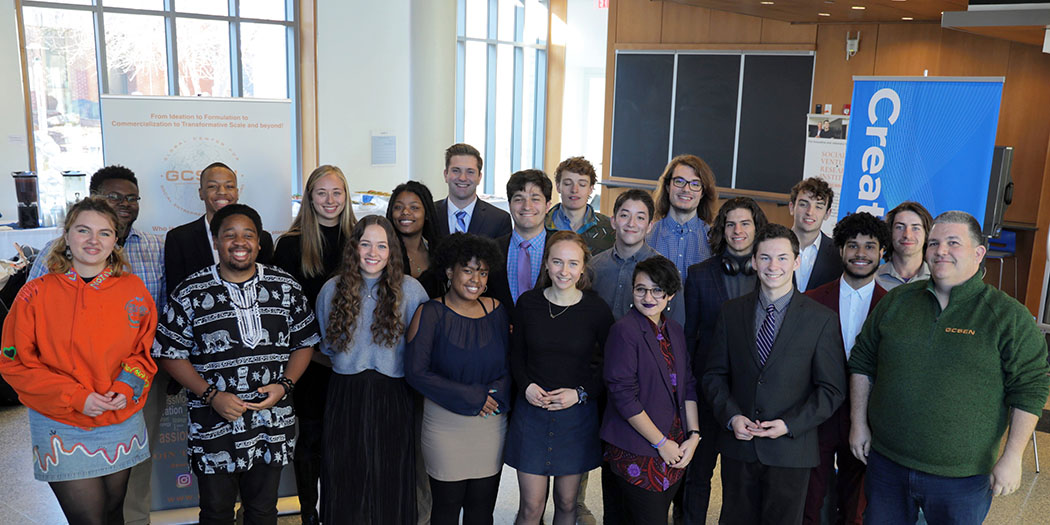 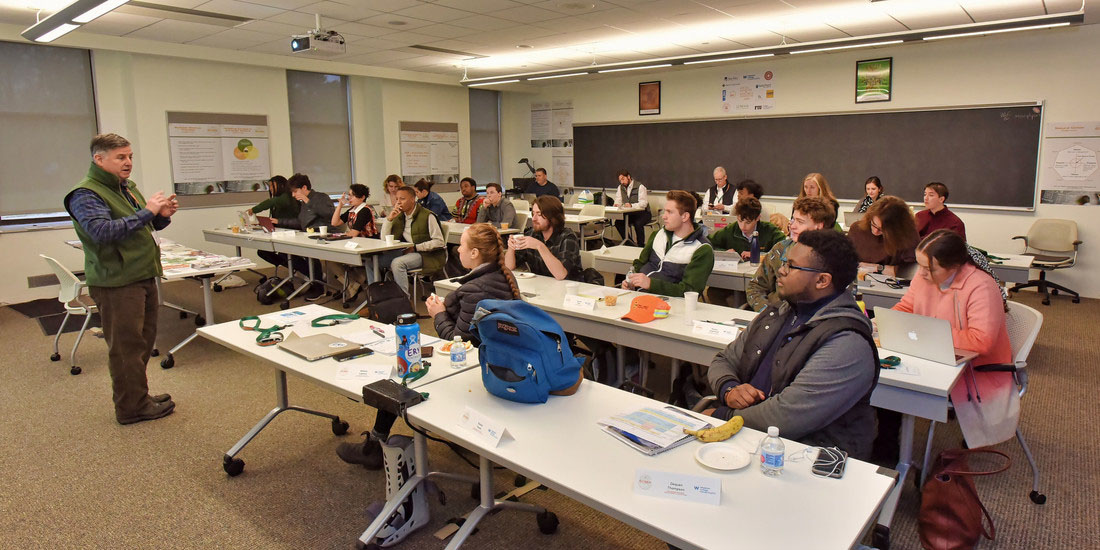 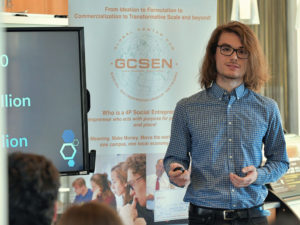 What it is: A self budgeting and finance mobile app that will allow users to track and plan their finances more clearly and effectively

Why he signed up: “I wanted to explore if social entrepreneurship would make it possible for me to pursue a line of work that I not only enjoyed, but was also passionate about.” 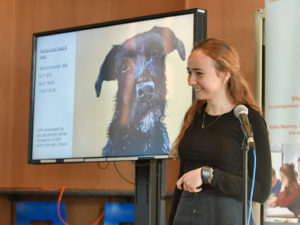 What it is: Custom hand-painted pet portraits

What she learned: “The professors and students gave me so many great solutions to how I can scale my business.” 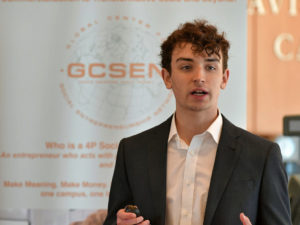 What it is: A content production company specializing in video that represents brands trying to bring about positive social change through authentic and engaging content

Current career goals: “I would really like to go into advertising, I’d love to work as an art director or have my own production company.” 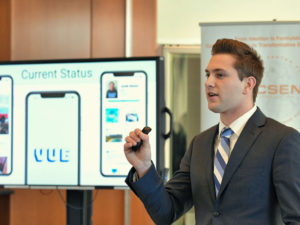 What it is: A mobile app that allows users to pull varying content from different social media platforms into one, single, streamlined feed for them to see, saving time and giving users control of their online presence

What he learned: “One major thing I learned from the program is that you can follow your passion and turn it into a business. It may take a few years before you become profitable, but holding on through those years is crucial because once you start to become successful, it is all worth it.” 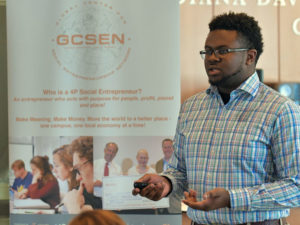 What it is: A mobile app that sets up low income and retired workers with professional financial coaches to help them manage and invest their money

Why he signed up: “I figured this would be a great place to learn how to help people through my own means.” 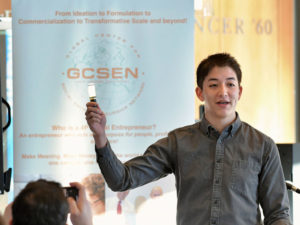 What it is: Open-sourced DIY kits, from speakers to simple lights to pour-over coffee makers, that teach users the capabilities of makerspace disciplines

What’s next: “Currently I am applying to graduate schools for a program in computer vision. I hope to explore the cross section between computer science, computer and human interaction, and digital arts. There is so much that computer science has to offer at the high level and I want to explore my creativity through a programmatic lens.” 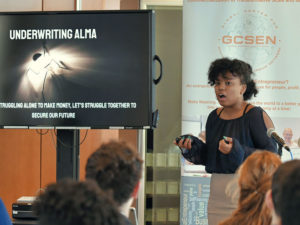 What it is: A website that helps struggling freelance filmmakers and photographers by allowing the general public to invest in their projects

What she learned: “One thing I learned from the program is that even if you are scared you’ve got to fake it until you make it.” 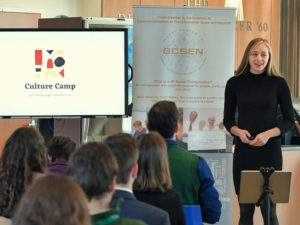 What it is: A nonprofit that brings language and cultural education to communities through summer camps, individualized tutoring services and other programs

Why she signed up: “[GCSEN Founder and President] Mike Caslin came into my ‘Social Entrepreneurship’ class last semester and talked about the program. I’m not a business major, but when I heard him talking about the program and saw the video from the past years, I knew I had to do it. I wasn’t sure at first what my social venture would be, but I knew that this would be the perfect space to create a foundation for a business or organization that will make a positive impact on the world.” 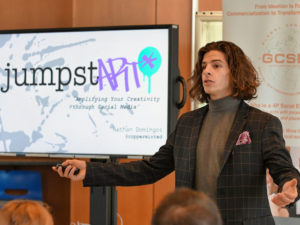 What it is: Seminar-style classes that teach critical social media marketing skills to artists, helping them to take steps toward greater financial and critical success

Why he signed up: “Starting a business is a skill I desperately wanted to learn how to do so that I can set myself up for success later on. I also wanted to learn creative ways of marrying my artistic interests with my larger philanthropic goal of breaking down elitism in art. I believe art should be for all people, and that, conversely, all artists deserve the ability to thrive off their artwork.” 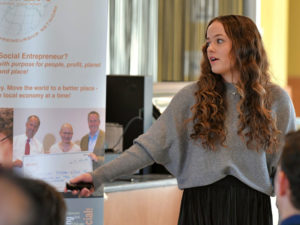 What it is: A line of athletic clothing geared toward first responders (police, fire and EMTs), branded with a recognizable logo that aims to start conversations about mental health and trauma and support a population vulnerable to suicide

About her design: “The logo, which entails a blank before the word proof, as well as a line through the word, is symbolic of the reality that we, as humans, do not have to withstand all that life throws at us. Your mental health is not bulletproof, fireproof or trauma-proof. […] When first responders wear my clothes underneath their uniform or to the gym, or see their family members wearing it, it is my hope that they will be reminded to check in with their own mental health and acknowledge that it is OK to seek help.” 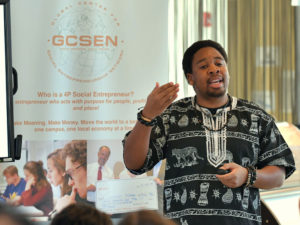 What it is: A mobile app for international students that gives them information about American culture, campus resources and connection opportunities

What he learned: “I learned how to conduct presentations effectively with specific body language as much as specific words.”