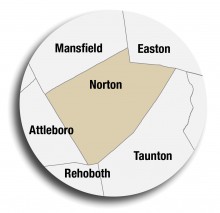 A group of Wheaton students tackled a question that regularly vexes colleges and universities: How much do students contribute to the local economy?

Students in Associate Professor of Mathematics Rachelle DeCoste’s statistics class dug into that question this spring at the request of President Dennis M. Hanno, who wanted to be able to accurately represent the college’s impact on the community.

“My goal is to understand the impact that the college has on the local economy,” President Hanno said, explaining his interest in the class’ work. “One category of business that I would be interested in knowing more about, for example, is restaurants. How much do students spend in local restaurants? How often do they visit?”

To answer the question, a group of six students—Cecilia Kruger ’15, Stephanie Raymond ’15, Victoria Walker ’15, Nadia Cromwell ’17, Jennifer Fialli ’17 and Claire McIntyre ’17—recruited 75 classmates taking statistics courses at the college to track their purchases for the week of March 23 through March 31, 2015.

Once the data were collected, the students employed the methods of statistical analysis that Professor DeCoste had been teaching, including analysis of variance tests to ensure that their results represented a valid sample.

The initial analyses led the student team to make several refinements to the data. For example, the majority of students spent between $41 and $53 during the course of the week. The small number of individuals who spent substantially more than the average (as much as $300 in one instance) were removed from the sample to avoid skewing the results.

The team’s finding: Wheaton’s 1,500 students spend between $1.8 and $2.4 million annually with businesses in the communities surrounding the campus.

While the students determined that their findings could be reported with a relatively strong 90 percent confidence level, they also pointed out shortcomings of their work, such as the absence of first-year students among the study’s respondents and the timing of the survey.

“This was the week after spring break, so students might have been spending more or less than normal. If we had a longer time sample for spending, we might have had data with less variance,” Kruger said. “In other words, the people we identified as being outliers might not have been outliers after all.”

But President Hanno praised the group’s work. “We know that the students’ estimate on average spending could be refined further with additional study, but this is a darn good estimate,” he said.

Chances are that Wheaton students will be able to refine the study in the near future. “This project gave a real-world context and a real-world problem for the students to apply what they learned in the class,” said Professor DeCoste. “I’m teaching introductory statistics next year, too, and we can run the study again.”