Those attending Fall Fest on campus this weekend can get a taste of some of the independent musical talent Wheaton has to offer at the third annual Wheaton Woodstock.

The free concert, being held Friday, October 12, from 8–10 p.m. in the Balfour-Hood Atrium, is organized by the Music Co-Op, a student organization that provides resources to Wheaton musicians, from practice space and equipment to networking opportunities.

This is the first year Wheaton Woodstock will coincide with Fall Fest, and the hope is that alumni, friends and others visiting Wheaton this weekend will drop by to enjoy some music.

“In past years, we’ve done the concert early in the semester as sort of a relaxing time where we introduce some of the bands we have on campus and show you what you can do if you’re interested in performing,” said Ally Amaral ’19, vice president of the Music Co-Op, and a double major in music and physics.

At this year’s event, in the first hour, student singer-songwriters Weiman Chen ’22 and Cameron Field ’21 will each perform solo, followed by the band The Kapps, featuring students from around the Boston area and Ethan Powell ’19 on guitar. Then, Boston-based funk and disco band Booty Vortex will perform.

“Through the years, the genres of bands have changed with students. There are some years when we have a lot of bands, and sometimes it’s just a few solo performers. It’s interesting to see the progression of what’s popular right now on campus,” Amaral said of Wheaton Woodstock. 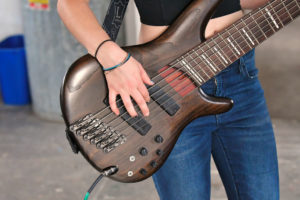 The Music Co-Op has been around for about a decade, and this year relocated from the Old Observatory to a temporary space in the carpentry workshop/senior art studio—a small white building located next to the Physical Plant building.

“We provide a 24-hour rehearsal space and pretty much all of the equipment that you would need to form a band and practice. The space is open to any kind of musician—we’ve traditionally had a lot of rock groups, but we’re also this year trying to make it more open to classical chamber ensemble or jazz groups. There’s a group of first-year students who are trying to start a marching band,” said Merseal, a double major in music and psychology. “This year we’re more connected with the radio station, because they have the recording studio, and we’re trying to get more bands to record their music and put it out around campus.”

The Music Co-op also runs a website designed to be a resource for student musicians. (The site is accessible to anyone logged in to their Wheaton email address.) 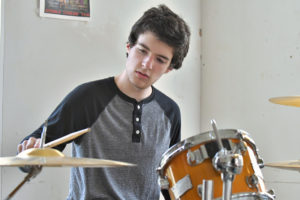 “We have a document that’s part of our website, called the Wheaton Music Network, where people can put in their information—what they play, what genres of music they’re interested in, what kind of band they want to start, and contact info. That’s the best place to start if you’re looking to start a band,” said Reed, a double major in music and computer science.

The Music Co-Op puts on several events throughout the year, including Wheaton Woodstock and a Halloween-themed show in The Lyons Den called Daemon Daze, featuring student bands, a costume contest and decorations by the Student Art League. This year’s event will be held on Friday, October 26 at 8 p.m.

In November, the Co-Op is organizing a visit by Wheaton alumna Siv Anderson ’14, an accomplished singer-songwriter living in New York City.

They also host a number of open jam sessions where student musicians can meet, including an upcoming session on Saturday, October 20 that will be put on in collaboration with art groups on campus. 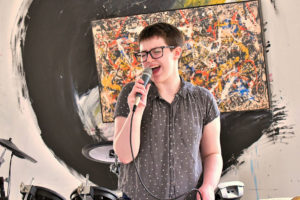 “Students can come and bring their painting supplies and paint while we do music,” Amaral said.

Being part of the Music Co-Op is not just a fun extracurricular—it’s providing career experience, too, Amaral said.

“Setting up shows and getting together musicians and opening up a practice space and taking care of it has been very useful, as someone who’s interested in music technology—just knowing what you need and what needs to be maintained,” she said.