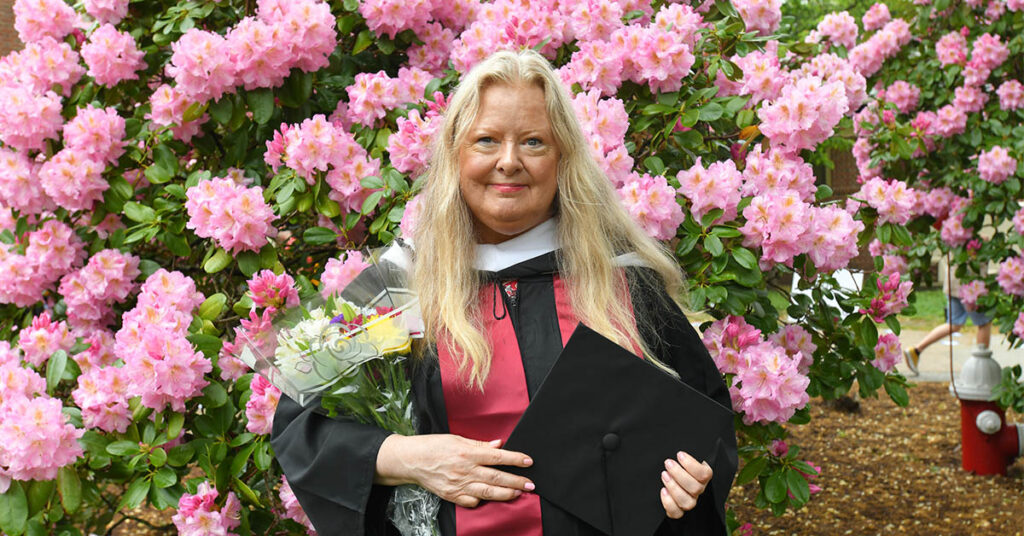 Dale Merriman ’22 proves that it’s never too late to finish what you’ve started.

She was only four courses shy of graduating from Wheaton College decades ago when family struggles and personal challenges prevented her from finishing her education.

But Merriman never forgot Wheaton. This past year, thanks to professors and staff, she was able to take advantage of virtual technology to complete her coursework for her bachelor’s degree in English.

The wait may have been long, but the arrival was sweeter than ever for Merriman, who walked the stage at Wheaton College’s Commencement on Saturday, May 21, as a newly minted graduate—cum laude.

During an interview via Zoom from her home in Brooklyn, N.Y., Merriman said she is overjoyed at fulfilling a long-held dream. She also is pleased to honor her late parents, who made sacrifices for her to attend Wheaton decades ago.

“I’ve been crying happy tears lately. When I walk across the stage, I’ll have to contain them,” she said. “I feel like I’m going to have a sense of completion, and that hasn’t come easily in my life. It’ll be a new feeling for me.”

Throughout the journey from Merriman’s initial enrollment at Wheaton in 1975 to her graduation milestone, she found the strength to not only overcome setbacks but thrive. After withdrawing from college, she went through serious personal challenges, including a divorce. Eventually, she overcame these struggles and channeled her energies to raising her two young sons, which entailed juggling multiple jobs.

Her flexibility, love of writing and joy in finding meaningful ways to help others led to various positions, including administrative coordinator, cashier and accountant, communications director, human interest newspaper reporter, grant writer, home health aide, and a peer specialist who counseled women dealing with homelessness. For the past 16 years, she has established herself as a successful real estate agent in New York.

The thought of finishing her Wheaton degree never left her mind.

“Years ago, I saw an NBC News broadcast about a woman in her 80s who graduated from Smith College. I was in the midst of upheaval, a heavy workload and psychological turmoil. This was a long time ago. I remember thinking of the idea of returning to school as a possibility, no matter how long it took me to get there,” she said.

Merriman took steps to achieve this dream deferred with the help of several professors and staff from the Wheaton College Filene Center for Academic Advising and Career Services.

Since September 2021, she has completed one psychology course and three English courses, including an honors senior seminar, remotely, to earn the credits needed to graduate. Her strong academic performance qualified her for a Thurgood Marshall Scholarship.

Professor of English Michael Drout, who taught a course on Chaucer, used a Kubi telepresence ‘robot’ that holds an iPad so Merriman could be more of a regular presence in the class. Merriman said she found the discussions stimulating and said it was nice to see the enthusiasm of students.

“There was a nice synergy and wonderful critical analysis and creative thought,” she said.

Drout said students benefited from the perspective of a non-traditional student like Merriman.

“What was particularly great about Dale was that she was so obviously a true Wheaton student, and the other students recognized this. It was fascinating to see that a Wheaton student from 1975 and Wheaton students of 2022 had that special quality of Wheaton students, a genuine interest in and concern for each other, and real happiness in the success of others,” he said.

“In many ways, Dale’s career underlies her boundless enthusiasm both for details and the broader vision that they embody. She is very aware of language’s pitfalls and opportunities with her interest in theater and her having worked as a newspaper reporter and in counseling,” he said.

Claire Buck, professor of English who taught a course on modern era fiction, added, “Dale was such a pleasure to teach because she was the perfect combination of a voracious reader with a passionate appreciation for aesthetic experimentation. We had so much fun every week— always laughing—while doing really substantial work.”

Merriman said the academic journey has been incredibly rewarding.

Merriman is the first to say that her journey is far from over. Equipped with a bachelor’s degree from Wheaton, she is excited about multiple projects on tap, including being hired to help a playwright edit a screenplay and being commissioned to find a public location for a New York art installation.

Also, she said finishing her degree whet her appetite for more. Next year, she is planning to pursue an online master’s program in film and media at Johns Hopkins University.

But leading up to the big day, she stayed focused on that moment on the stage—and all that it represents in her journey to self-fulfillment.

“I’m looking forward to sharing my happiness with my family, friends, former classmates and just everyone who has supported me along the way,” she said.