Would you rather die than speak in public? Amanda Good Hennessey ’90 might be able to help.

As a high school student, Hennessey was extremely shy and enjoyed losing herself in reading, writing and art projects. Today, she is an accomplished actress of stage and screen, an outgoing public speaking coach and acting teacher—all of which put her front and center.

Her journey to a comfort zone that allows her to excel in all of this runs right through Wheaton, where her experiences in and outside of the classroom ultimately have helped land her in her latest role—author.

In May, she published her first book, Your Guide to Public Speaking: Build Your Confidence, Find Your Voice, Inspire Your Audience (Adams Media, a division of Simon and Schuster, 2019), which offers ways to overcome the anxiety of making presentations in public—from wedding toasts to keynote speeches. (Multiple studies have indicated that many people fear public speaking more than death.) 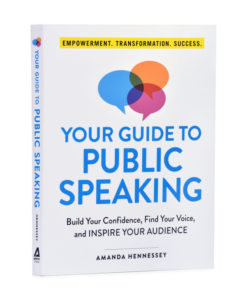 The author had a book-signing and made a presentation in June at the Cambridge (Mass.) Public Library, where she offered some tips.

What is the most important advice she offers for those who are nervous about public speaking? “It’s not about you. You are the messenger—the message is the important thing,” she said. “Very often people believe that the experience is all about them because they are the center of attention. I like to dispel this notion as quickly as I can. Serving the audience is what matters.”

Hennessey is driven to help others gain confidence in speaking so they feel empowered to deliver their important messages. She has been honing her own ability to reach audiences since college.

“I discovered so much about myself at Wheaton. I found my voice and strength, which has helped me tremendously in all areas of my life and especially as an entrepreneur and writer,” said Hennessey, who majored in Asian studies and decided to pursue acting as a career her senior year.

The book taps into her coursework at Wheaton as well as her experiences as a performer.

At Wheaton, she was a preceptor and a writing tutor. She also took many creative writing courses, particularly with now-retired professor Sue Standing, whom Hennessey credits with helping to cultivate the comedic writing voice that comes through in her book.

In the years since Wheaton, Hennessey has appeared in “The Heat,” starring Sandra Bullock and Melissa McCarthy, and “Rubberneck,” directed and starring Alex Karpovsky (Ray) of HBO’s “Girls,” among other films and plays, and has been in a series of commercials, including iParty, Central Jeep and Comcast.

She has been teaching acting for more than 15 years through the business she owns with her husband and taught “Acting for Writers and Directors” at Boston University from 2006 to 2017. She also ran Essayons Theatre Company (French for “let us try”) with her husband.

In 2014, she launched her coaching business Boston Public Speaking and recently expanded with San Diego Public Speaking. She teaches workshops all over the country, working with individuals, businesses and organizations, including Boston Children’s Hospital, MIT and Petco.

It all started after a woman asked Hennessey for help with a presentation she needed to make for her job at a bank.

“I found the process of coaching her fascinating. I loved digging deep into the purpose of the presentation and navigating how open the audience had the potential to be. It was gratifying to inform the writing and the slides and manage nervous energy using what I knew about performance,” Hennessey said. “For the most part, each client is essentially writing and performing their own one-person show.”

It was Hennessey’s own bout with stage fright that eventually led her to write the book, after researching and experimenting with various strategies to overcome an unexpected discomfort during the run of a theater production.

The key was to conquer her own internal messages first, she said. “I became much more aware of my thoughts and realized that certain belief systems about anxiety, outcomes and self-worth were really tripping me up. It became clear that I was nervous about being nervous, which only compounded my anxiety. I learned to choose more nourishing and supportive thoughts and to have much more compassion for myself.”