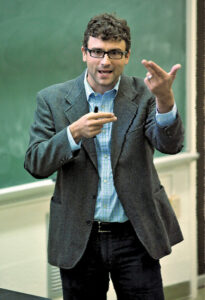 Assistant Professor of Psychology Matthew Gingo says he has always enjoyed “people watching” and trying to make sense of what they do. He’s particularly interested in understanding the ways in which people lie and deceive each other. The First-Year Seminar (FYS) he offered last fall for aspiring leaders—from potential senators to football coaches—gave him and his students the perfect opportunity to explore the use of deceptive tactics and to determine how to see through to the truth of what matters. The title in and of itself was enough to intrigue the Quarterly to want to know more—”Cognition in the Wild: The Psychology of Bullsh*t, and Other Deceptive Tactics for Future Senators and CEOs.”

Tell us about what you explored in your FYS.

The course was designed around the idea that with all the information and misinformation that we are inundated with on a daily basis, we need to become discerning consumers of information. And that with the right approach, we could see through the cloud of B.S. that seems to hover over some of our most important issues. We focused on examining deception in a systematic and psychological way. Who lies to whom about what? Why do we lie? What are the telltale signs? When do we think deception is warranted, and why? The students in the class were really motivated, which meant that we got to consider those questions from a number of perspectives—from Kant and Bok, to the most current empirical articles on micro-expressions and cultural subversion. It was pretty cool.

What led you to develop the idea for this FYS?

It was really a convergence of my research and what I was hearing and reading in the news at the time. I study the development of moral resistance and social subversion in children. For the most part, this means that I study children’s judgments about when it’s all right to lie, disobey authority figures, and break the rules. I knew that I wanted the class to touch on those ideas, and while I was thinking about how that might work, it seemed like every time I turned on NPR there was a story related to deception. Monica Lewinsky was back, Chris Christie was under investigation, Fox was reporting that vaccinations caused autism, Jamie Dimon was paying a $10 billion fraud settlement, and Anthony Weiner was running for office again. Stories about lies and liars were stealing the headlines, and I thought, “This is pretty fertile ground for a psych class.”

How does this FYS relate to your coursework?

I teach a 300-level seminar called “Moral Development”; half of that course is spent looking at resistance and subversion as ways of redressing imbalances in power in various types of asymmetric relationships—between parents and children, husbands and wives, doctors and patients—so I have some opportunity to look at deception in that class. Otherwise, I’ve never had the chance to focus specifically on deception in any of my classes. That was one of the bonuses of teaching an FYS. As far as research goes, the course followed some lines of my current work pretty closely.

Tell us about the very provocative name, which we love.

I’m glad to hear that you love it. I’ve gotten really positive feedback on it, but there were a few folks who thought it was a little too provocative at first. The title, as well as the content of the course, is definitely meant to get your attention, but it’s also supposed to be tongue-in-cheek. I have no doubt that some of my students will become world leaders, but I’m not trying to teach them that you have to lie to get to the top. The class is about understanding deception in context and using that knowledge to read between the lines and get inside the mind of the liar. That’s why it’s called “Cognition in the Wild”—the idea is that none of this happens in the laboratory, not for senators, not for CEOs, and certainly not for us. Lies are being told on the fly, oftentimes without a great deal of tactical forethought, and as a good consumer of information you need to be able to read through the B.S. on the fly, too.

What do you categorize as “B.S.”? And how do we recognize it?

I actually posed this question to my students on the first day of class and on the last day of class. At first, I think we all just considered B.S. another name for lying, but as we took a much closer look at it throughout the semester, I think the consensus was that bullsh*tting, or shooting the bull, is basically consensual deception. Rather than lying with the specific goal of misleading someone about the truth value of a given fact, B.S. appears to be much more about appearing to know something that you don’t without much consideration of shaping someone’s knowledge or misinforming them.

You put all leaders in the same category—senators to football coaches. Why?

The point of lumping them together was simply to point out the similarities in social stature despite the apparent dissimilarities in their work. The course was for aspiring world leaders, people whose influence is undeniable and whose statements are continuously scrutinized, and football coaches happen to clear that bar. Look at how people all over the country were obsessing about the air pressure in Bill Belichick’s footballs. Deflategate was bigger news than anything coming out of Washington, D.C.

What lessons did you want students to learn from your FYS?

My main goal was to get students thinking critically and deeply about deception from a number of competing perspectives. It’s easy to say that you know B.S. when you see it, but I wanted them to dig into that idea and really explain it. It’s also easy to accept that lying is bad and honesty is good without much consideration, and I wanted my students to really pull that apart and take a closer look at that idea. The goal was to have students connect the dots between what we’ve learned about deception from 50 years in the lab to their experiences tangling with honesty and deception in the wilds of everyday life.