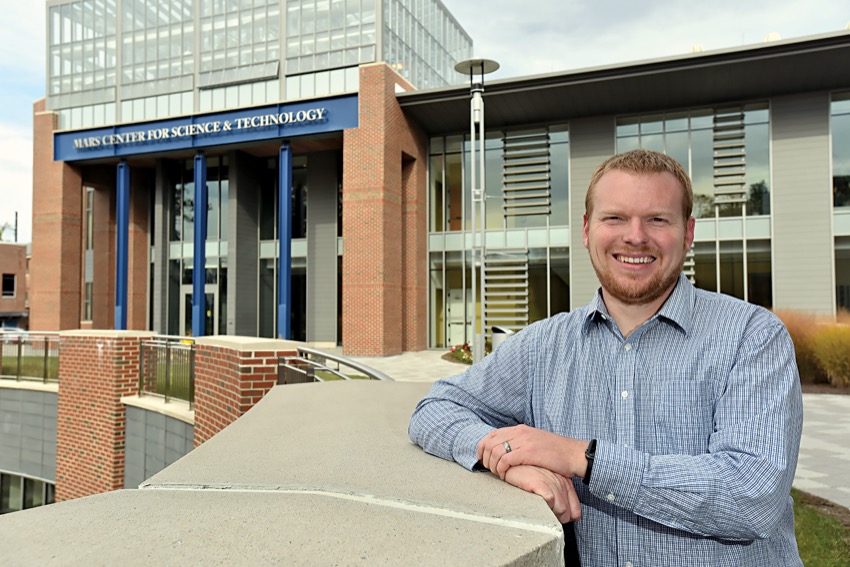 Ten years after graduating from Wheaton, Stephen Benz ’05 is among a group of trailblazing entrepreneurs who are harnessing DNA sequencing technology to more effectively treat cancer.

In 2001, when Benz was a freshman at Wheaton, the Human Genome Project international consortium—a U.S.-funded collaborative biological project— published the first draft and initial analysis of the entire human genome sequence.

Inspired by these advances, Benz majored in computer science and participated in Wheaton’s Genomics Group, which brings together students fusing computer science and biology in their research. He went on to receive his master’s and doctoral degrees in biomolecular engineering and bioinformatics from the University of California Santa Cruz (UCSC). Now, thanks to funding from a private investor, Benz is the co-founder and CEO of Five3 Genomics—a Santa Cruz-based biotech company developing innovative cancer genomics software.

Benz shared his journey with a packed classroom of Wheaton students in the Science Center during a talk on October 22.

Cancer deaths have dropped only 5 percent from 1960 to 2005—compared to heart disease (64 percent decline); stroke (74 percent decline); and influenza and pneumonia (58 percent decline), according to Benz. Advances in personalized medicine—an emerging approach for disease that takes into account individual variability in genes, environment and lifestyle—may hold the key to better diagnosis and treatment. 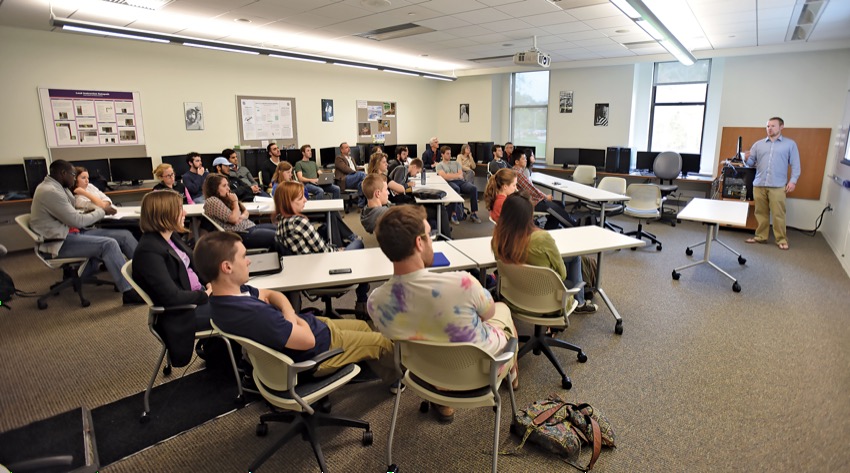 In cancer, the mutations of cells go haywire, “breaking the social contract of the body,” he said. But through genomic data analytics, it’s possible to categorize tumors associated with breast cancer, leukemia and colon cancer based on the DNA sequences of the individual’s normal and cancer cells.

Benz developed some of the core software of Five3 Genomics, known as Paradigm, as a UCSC graduate student. This technology is used to understand which molecular pathways are affected by the genetic changes in a patient’s cancer cells. The company developed visualization tools to present the complex genome analysis in a user-friendly manner. This information can help guide therapeutic decisions in clinical settings, or help drug companies identify new targets for drug development, he said.

Professor of Computer Science Mark LeBlanc invited Benz to his COMP/BIO 242 “DNA” class to serve as an example to students of where their studies could take them.

“Students often see their homework as just that, homework to be graded, without meaning. Here is a student who showed them his life’s work that is a direct consequence of his undergraduate and graduate work,” said LeBlanc, who had Benz as a student in his computer science courses. “In my DNA course, students and I are thinking about personalized medicine as we learn to write software to search through DNA. And here was someone—a Wheatie, no less—who has made personalized medicine his career mission.”

Aubrie Soucy ’16, a bioinformatics major, said she really enjoyed Benz’s talk. “Hearing about his successes in the fields of bioinformatics and genomics was very exciting for me, as someone who is looking to pursue a career in this space next year,” she said.

“It was really inspirational to hear about how much he has accomplished since leaving Wheaton. We need more people like Steve out there who are investing their time and intelligence in the right place,” she added.

For Benz, a liberal arts degree from Wheaton served him well when it was time for the company to choose the CEO of Five3 Genomics. His colleagues and graduate school collaborators—experts in engineering and genomics— all looked to him to take the helm of the company.

“Everyone pointed at me,” he said. “The education I got enabled me to do that. My degree exposed me to so many fields, for example, exposed me to economic majors, and allowed me to be a jack of all trades.” 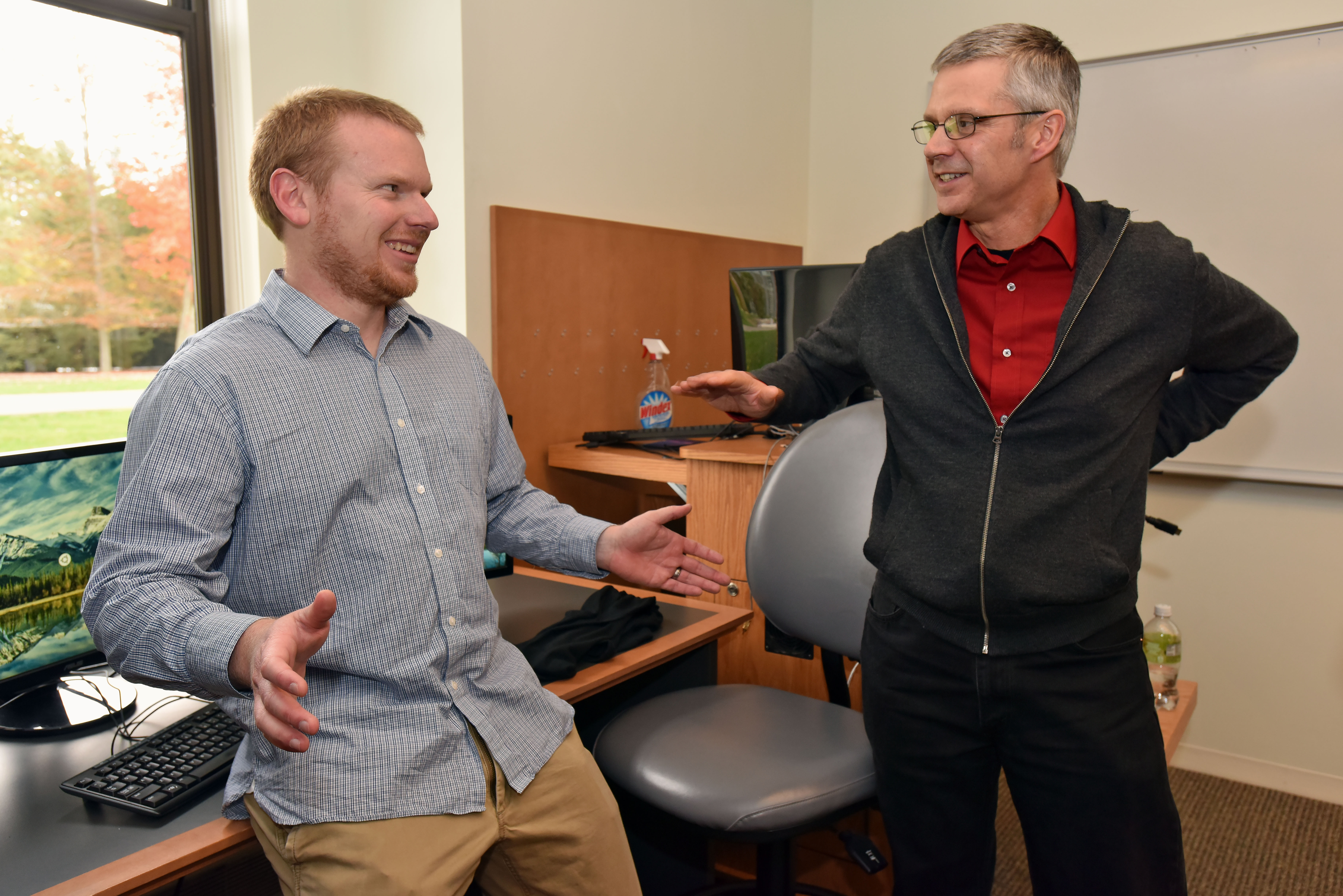 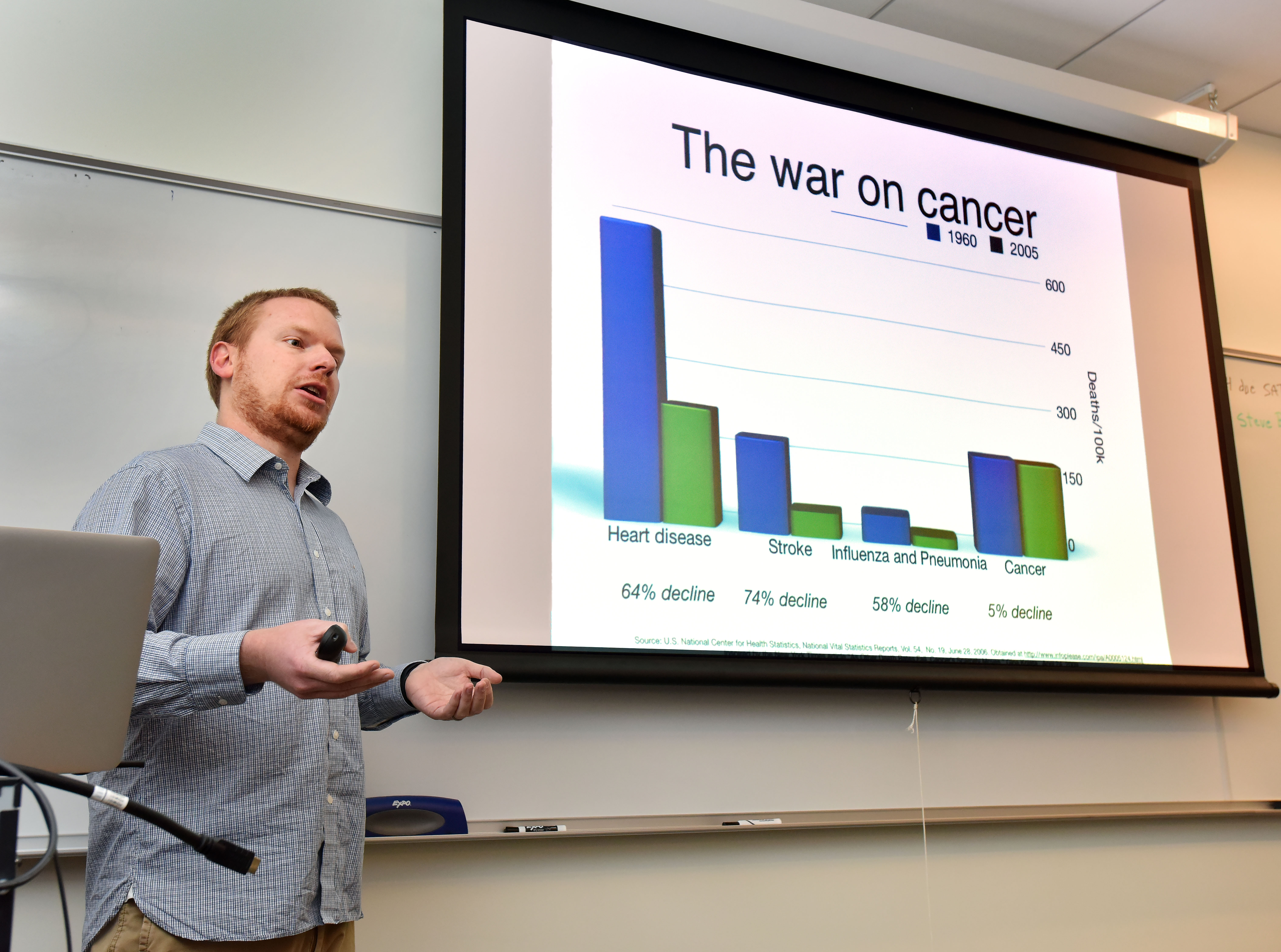