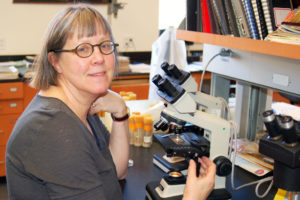 Professor of Biology Betsey Dyer recently participated in a panel discussion held in conjunction with a screening of the documentary film “Symbiotic Earth,” about the work of biologist Lynn Margulis.

The event, held September 22 at Harvard University, was a fundraiser for the nonprofit organization Biodiversity for a Livable Climate. Dyer is interviewed in the film, which was originally released by Hummingbird Films in March 2017, about her experience working as a graduate student with Margulis. 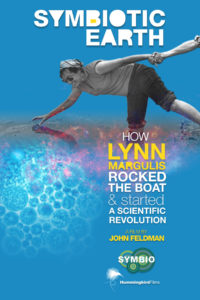 The film, titled “Symbiotic Earth: How Lynn Margulis Rocked the Boat and Started a Scientific Revolution,” explores Margulis’s theory that symbiosis is a key driver of evolution, an insight that offered a new approach to understanding life and addressing issues such as climate change.

Dyer appeared on a panel with others who had worked with the late Margulis during her career, answering questions after a screening of the film.

“Getting a Ph.D. launches one’s career. But getting a Ph.D. with Lynn, I think, was truly transforming for me,” Dyer said. “To this day (34 years later), I use an evolutionary framework influenced by her and a particular research and teaching focus that I got in her lab,” Dyer said of Margulis, with whom she worked at Boston University in the ’80s. “For me (and for Lynn) everything begins with microbes and then everything continues with microbes. To overlook them is to miss a huge part of biology.”

Dyer will give a talk on gut microbiota at a November conference, “Climate, Biodiversity, and Survival: Listening to the Voices of Nature,” also sponsored by Biodiversity for a Livable Climate and held at Harvard.