Theater can give a voice to even the most inhibited.

Sarah, an immigrant to New York, discovered that when participating in free performing arts classes offered at her Brooklyn-based school, Vista Academy.

The sixth-grader hardly uttered a word during the first four classes, but soon found an opportunity to break through her shell during one particular assignment. The class, divided into small groups, was asked to create a play with a beginning, middle and end—that had to consist of a dream, a challenging true story and a magical element.

“When it came time for the group to perform their play at the end of the class, Sarah’s group did a mime and movement piece—totally without words—which was the story of Sarah’s emigration [from China] to the U.S.,” recalled Stacey Linnartz ’95. “Somehow she was able to communicate her story to her group and they were able to create, rehearse and perform it without words. There was not a dry eye in the house among the adults, and the kids loved it so much they demanded to see it again.”

After the performance, students saw Sarah in a whole new light, and flooded her with questions about her journey to the U.S.

“And the best part of all was that Sarah and her group cast her as herself, as ‘Sarah, the heroine,’ who had overcome challenges and arrived in this classroom, to share her story with us. And she was brilliant,” Linnartz said. 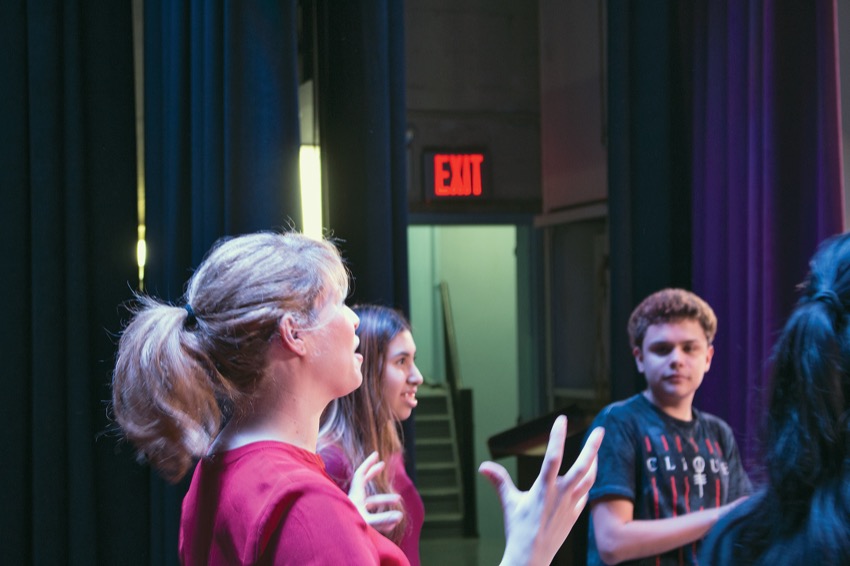 The nonprofit provides tuition-free professional performing arts services to underserved youth, ages 6 to 21, who reside in New York City. Kids Creative Collective’s main goals are to nurture empathy, instill pride and expose children and teens to artistic and professional opportunities in theater, according to its mission statement.

When Linnartz first meets students, they are skeptical, shy, reluctant—and sometimes even defiant, she said.

“But by our third visit, we have won them over. They know we are not here to embarrass them, but to truly help them communicate, collaborate and have fun,” Linnartz said.

As students move out of their comfort zones, they aren’t afraid to create stories out of difficult subject matter.

“Theater is in our bones; it is a fundamental communal art form. Once we break through their inhibitions and fears, these young people make some of the best theater,” she said. “Some of our students live in very challenging situations and the theater is a sacred place where they can tell their truth and their community can get to know them in a whole new way.” 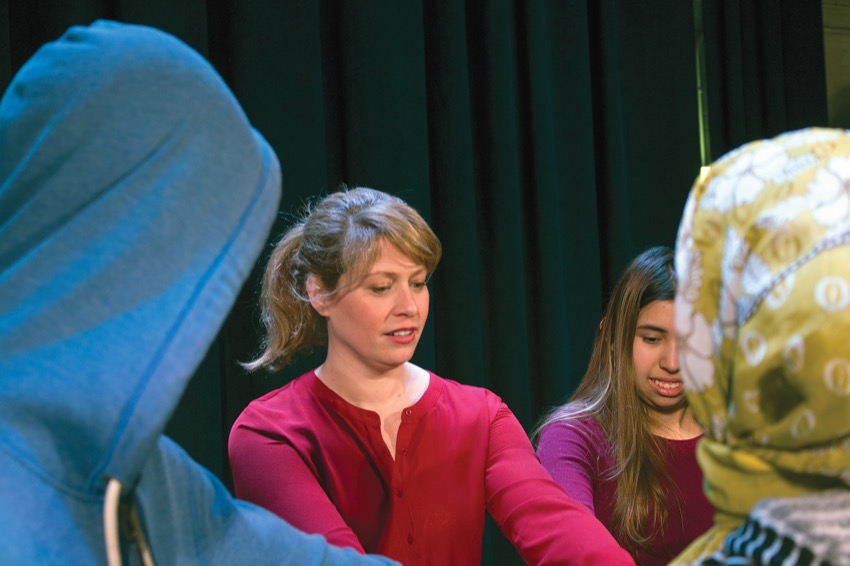 Linnartz’s love for theater began at a young age. As a child, she would dance and sing in the backyard at family parties, and she enjoyed trips to the city to see musicals and plays several times a year.

Her mother—a musician and music teacher—exposed her to music including Judy Collins, The Beatles, Bach and show tunes. “Because I loved dancing, my parents enrolled me in a modern dance class when I was 4. I loved it and stayed with the same teacher through high school,” she said.

Linnartz soon took on roles in all the productions at her high school—both musicals and plays—and served as drama club president. “I fell in love with the collaborative nature of the art form,” she said.

Unsurprisingly, when she enrolled at Wheaton as a freshman, she majored in theater and dramatic literature. She also minored in art history.

It didn’t take long before Linnartz entered the spotlight on campus.

During her freshman year, she acted in a play by classmate Liza Lentini, who was a senior at the time, and performed in Professor of Theatre David Fox’s production of “Oedipus” during her sophomore year and then “The Tempest” as a junior.

She also played a critical role offstage. As a senior, she directed Harold Pinter’s “Old Times” in the experimental theater and Sophocles’s “Electra” on the main stage in Watson Fine Arts.

“David Fox is one of my most beloved theater mentors,” Linnartz said. “He is an impeccable director and makes very complex concepts accessible with great humor—but also with great expectations for his students. I credit him with my ‘theatrical self-esteem’ and sense of being a theater artist with a unique voice and point of view as opposed to simply being an actor.”

“She was a gifted actor and director who had a knack for bringing the best out of everyone around her,” Fox said. “Nowhere was this more apparent than in her outrageously ambitious production of ‘Electra.’ I recall being swept away by its excellence. Greek material is difficult even for the most seasoned of theater practitioners, but Stacey more than rose to the challenge. The show was stunning in every regard.”

From stage to screen

Many years after graduating from Wheaton, Linnartz received her M.F.A. at The Graduate Acting Program at New York University Tisch School of the Arts.

As a graduate student, she played the lead role of Becca in “Rabbit Hole”—a piece that deals with the way family members survive a major loss (in this case, the death of a 4-year-old son).

“The play asked that I truly dig into some of the deeper, darker parts of my life and of the tragedies that visit all of us at one point or another. I became a pretty fearless, integrated actor after that experience,” Linnartz said.

In addition to acting onstage, she has worked in film, TV and web series—serving in roles including costume supervisor, actress, writer and producer.

She played the leading role in the films “The Last 48” and “The Weekend;” and acted in TV series, including “Dinner with Mom,” “Couples: The Digital Series,” “12 Months of June” and “Gossip Girl.”

“Working on film or in TV or in content for the web is really no different from working onstage when it comes to performance,” Linnartz said. “The camera is your audience, as opposed to a theater of 40 or 400, so you just allow your performance to play to an audience of that size.”

The differences, she said, lie in the preparation.

“In theater, you spend three to five weeks as a cast crafting a piece together, whereas in on-camera work usually all of the prep is up to you. If you are a smart actor, you are totally off book and front-loaded with a few specific ways of playing the scene once you hit the set,” she said.

Linnartz and husband Jeremy both taught acting and theater between acting jobs, and they decided they could make an impact in the community if they could craft their own curriculum and provide tuition-free services to students in underserved schools.

This idea propelled the launch of Kids Creative Collective, which the couple founded in 2011.

“In New York City, the schools that need the arts the most don’t have the budget, so we have become totally self-sustaining, and we can tell a principal that we will provide a free theater arts program. It feels really wonderful to be able to do that,” she said.

Currently, the Kids Creative Collective operates in four schools—reaching upward of 400 kids and teens in a school day and in after-school workshops. They also run two drama and film clubs in a Brooklyn middle school and a Manhattan high school.

Linnartz and other Kids Creative Collective teachers either enhance the curriculum of a schoolteacher with theater exercises or provide a 24-week theater curriculum for a particular grade.

“Basically I love doing this work as much as I love acting, because I am always learning, always reinventing what we do and how we can actually help kids and teens in the city. Hearing from a teacher that attendance goes up on the day of the week when we are in a classroom is very heartening indeed,” she said.

Zachary Rothman-Hicks, English and special education teacher at the High School for Health Professions and Human Services, remarked on the influence of the program: “I was beyond thrilled, excited and completely overjoyed by the positive impact Kids Creative Collective had on my students. The program taught my students how to express themselves creatively, that it’s all right to communicate, to be human—that in a rough, bustling and hectic city like New York it is OK to reach out and touch someone.”

Since the 2011 inception of the nonprofit, Linnartz has hired at least one new teaching artist, as well as launched one new program, each year. “Juggling the schedule with professional acting and producing work is definitely a challenge, but we are always looking to expand.”

In addition to teaching, Linnartz and her husband oversee the fundraising—working with a committee—to keep the programs running. “We have been very lucky to be able to support the organization this way, but we may need to hire a development director in the near future,” she said.

As an actress who discovered her passion for theater at a young age, Linnartz recently has turned her focus to inspiring teens to find their own professional path.

“I’m interested in continuing to help the teens who have aged out of our programming—whether or not they are majoring in theater or are considering a profession in the entertainment industry,” she said.

Linnartz recognizes the challenges young people face—especially those who enter college but struggle to complete their degree because they juggle part-time jobs to cover the cost.

“I am trying to help make sure the young people we know have the support—whether it be a small scholarship or a coffee chat several times a year—to ensure they are on track. We also give former students internships with us or introduce them to friends who can offer them one,” she said.

Whether on or off the stage, Linnartz acknowledges that everyone needs support in life to achieve his or her goals.

“It’s one thing to open up kids’ and teens’ minds to the world of art and theater, but without the real-world support it is very difficult to thrive in any industry,” she said.