For most children, the excitement of Halloween stems from the enormous amounts of candy dropped into their trick-or-treat bags—later to be strewn across the living room floor, counted and eaten. But for Lesley Bannatyne ’75, Halloween was about more than just feeding her sweet tooth as a child.

“I loved the surreal quality of the night. The candy was good, but the costumes and being out after dark with complete freedom was absolutely magical.”

Thanks to a creative father, her costumes went beyond the norm. She was Cleopatra, a firecracker, and once, along with her brother, a pair of dice.

With childhood memories like these, it is no wonder that Bannatyne pursued the research of Halloween when the opportunity presented itself. Today she is a nationally recognized expert.

She has published five Halloween-focused books. She has appeared on the History Channel and has contributed to Time Magazine, Slate, National Geographic, and the World Book Encyclopedia. She even helped to achieve the Guinness World Record for the largest Halloween gathering—a title held until 2009.

“The nicest people in the world are the Halloween people,” says Bannatyne of her jack-o’-lantern loving cohorts. “The people who build those horrible monsters, the people who build the haunted houses, create the collectible art and the costume makers. They are imaginative, they are creative, and they share this certain dark aesthetic that’s kind of intriguing.”

Bannatyne always knew that she wanted to be a writer. After majoring in English at Wheaton, she wrote performance pieces for a theater company, and worked as a freelance writer. In 1985 she received a phone call from her freshman year roommate, Margaret “Meg” Ruley ’75, a literary agent at the Jane Rotrosen Agency.

“She told me her agency was shopping around holiday books and wanted to know if I would like to submit a proposal.”

Intrigued, Bannatyne asked which holidays were left. Election Day and Halloween. It was an easy choice. Halloween: An American Holiday, an American History, which took her three years to research and write, will celebrate 25 years in print in 2015.

So what’s it like to be one of the foremost experts on Halloween?

“You are the go to girl for October,” says Bannatyne of doing interviews for radio and magazines. “Though it’s only quiet until March, because that’s when major magazines start figuring out their Halloween issue. There’s also a convention season that lasts from March until August.”

Along with being a Halloween expert, Bannatyne is the managing communications coordinator at Harvard University’s Department of Music. Because the bulk of her job involves writing—publishing and publicity material—finding the balance between her writing life and Harvard life is very important.

“I’ve always worked part time or freelanced. Because of that, I had the time to do the writing and research on Halloween.”

Currently, she is working on a book of short stories and has other holiday projects—but insists that she will not be giving up on Halloween anytime soon.

Luckily for Bannatyne, she doesn’t have to leave Halloween at the door when she comes to work. “One of the best things about the music department is that Halloween is a big holiday. Incoming students are told when they arrive on campus, ‘We dress up.’” 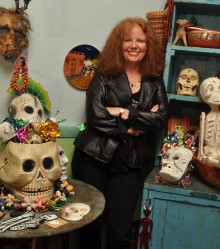