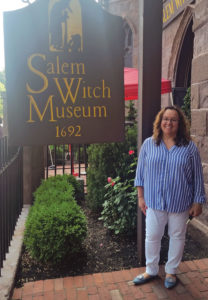 At Wheaton, Tina Koutsos Jordan ’82 developed a love of studying the past from professors like Alexander Bloom. Now, every day she gets to relive history and show others the value of not repeating the past.

Jordan, director of the Salem Witch Museum, joined the staff nearly 40 years ago while an undergraduate at Wheaton (she majored in government). The museum’s exhibits focus on a dark chapter in U.S. colonial history, from 1692–93, when mass hysteria and witchcraft accusations resulted in the executions of 20 people (mostly women) and the deaths of five others.

“The thing about witch trials and witch hunting is that fear makes people irrational. We’re trying to make people step outside of themselves. Before making rash judgments, we want them to examine all the evidence,” she said.

Under Jordan’s leadership, Salem Witch Museum guests are immersed in the history of the trials through life-size stage sets, figures, lighting and a narration of the witch hunt.

But the museum also offers programs like “Witches: Evolving Perception,” a supplemental exhibit asking guests to look at and identify how fear and triggering events have led to scapegoating throughout modern history—from Japanese interred in camps during World War II to Muslim-Americans getting physically abused or denied service following the 9/11 attacks.

The museum also keeps the public informed of new discoveries. For example, two years ago, scholars pinpointed the execution site (by hanging, not by burning as some incorrectly believe) of 19 of the accused witches to a Salem lot in a residential neighborhood (behind Walgreens) called Proctor’s Ledge.

“It’s an important piece of the witch trial story. At the memorial’s dedication, it was wonderful to witness how the Salem community commemorated this important chapter in American history and reaffirmed why we need to continue to teach the lessons of the trials,” Jordan said.

What motivates Jordan to stay here? Endless opportunities to learn.

Professors and researchers from local universities, colleges and historical societies partner with her and the museum to impart the latest scholarship on the trials and the continued relevancy.

Jordan, who also is vice president of Destination Salem, the board overseeing the city’s tourism and cultural office, is gearing up for a busy fall season—the biggest opportunity to make the past relevant.

In October, when thoughts of ghosts and witches are on the mind, tourism peaks and the museum usually draws 65,000 of its more than 350,000 annual visitors.