Editor’s note: Life is so short, unpredictable and often just plain unfair. Mark Baumer ’06, an environmental activist who was walking barefoot across the country to draw attention to climate change, was struck by a vehicle and killed on Saturday, January 21, on Highway 90 in Walton County, Fla. We are shocked and saddened by the news, and our hearts go out to his family and friends. Our writer Laura Pedulli had recently communicated with Mark for a story she wrote about him for the upcoming issue of the Wheaton College magazine. In his honor, we have posted the story here and we also will publish it in the spring.

Oh, the places he’ll go—without shoes, and for a good cause.

In October 2016, Mark Baumer ’06 set out on an ambitious goal: walking from Rhode Island to California with nothing on his feet.

An avid barefoot runner, the mode of transport suits him, he says. “Being barefoot out in America is more than just a hobby. There’s something magical about exploring the country I live in while literally feeling the earth with each footstep.”

It’s more than the experience Baumer seeks, however. He is raising money for the FANG Collective, a Pawtucket, R.I., nonprofit that mobilizes nonviolent resistance to the natural gas industry and supports other social justice movements.

“The FANG Collective is doing such great work locally and nationally on both an environmental and social level,” said Baumer, who has participated in FANG trainings and protests. “I’ve learned both how important the work they’re doing is and how hard they work. They are literally going up against huge million-dollar corporations on a very small budget. I wanted to help lessen their monetary burden.” 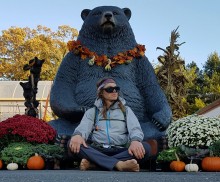 As of January, Baumer had reached Florida, and continues to trek on—approximately 10-15 miles per day, he

says (he’s trying to increase that number). Baumer passes the time on the walk listening to audiobooks and podcasts, and documents his surroundings on his daily blog (www.markbaumer.com).

So far, he has witnessed goodness in people wherever he goes.

“Close to 300 people have offered me shoes on this trip. It’s always really heartwarming,” he says.

One time in particular stands out for him: “A guy jumped out of his car in socks while holding his boots in his hand. He kept saying, ‘Take them just in case.’ Even though I didn’t take the shoes, it was uplifting. It was a huge emotional boost. I encourage everyone to fill the world with kindness,” he says.

At Wheaton, Baumer majored in English and played on the college’s baseball team. (He later received his master’s degree in creative writing from Brown University.) Since graduating from Wheaton, he has taken on a number of pursuits, including web content specialist and creative writing instructor at Brown, and programmer at the Northeast Waste Management Officials’ Association.

Baumer said playwright-in-residence Charlotte Meehan and baseball head coach Eric Podbelski helped shape him into who he is today.

“Taking Meehan’s writing for performance class unlocked a lot of creative instincts inside of me. Also, playing under coach Podbelski while at Wheaton developed a lot of the discipline and grit I rely on every day,” Baumer said. “It’s this mix of creativity and hard work that has helped me get through a lot of difficult days not only on this trip, but in much of my life since leaving Wheaton.”