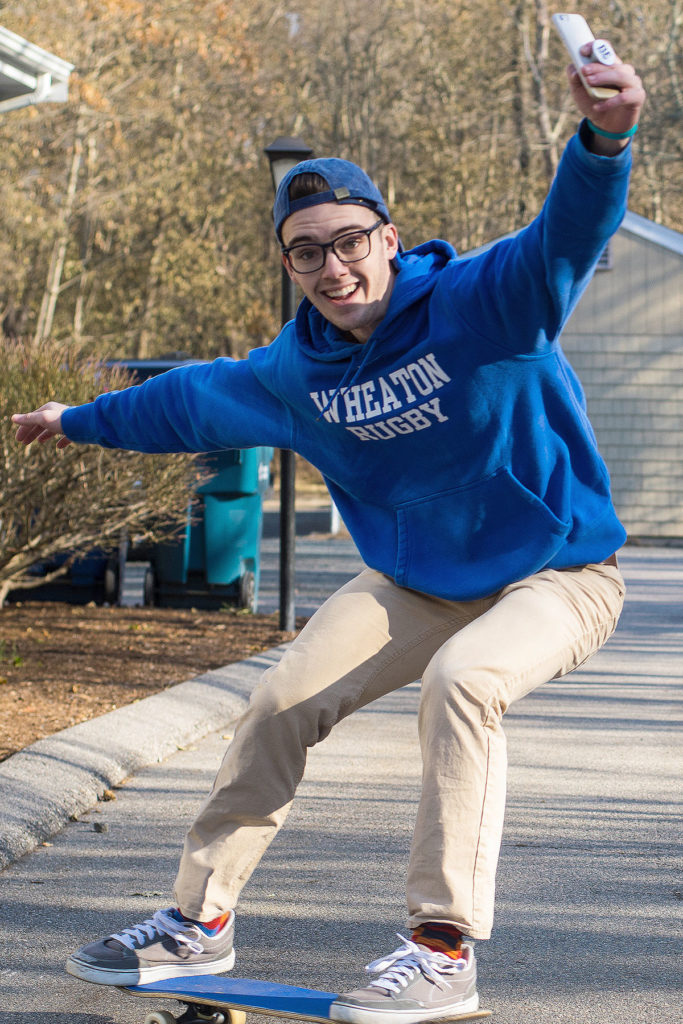 If you’re one of the about 500 people who regularly check out Wheaton’s Snapchat stories, you probably know Joey. The Snapchat ambassador skateboards around campus promoting student activities and events, touring Wheaton theme houses and sharing other snippets of campus life.

A neuroscience major from Douglas, Mass., Kevin “Joey” Batson ‘19 is the second student to manage Wheaton’s Snapchat account (wheatonma) in the almost three years it’s been up and running. After doing a temporary Snapchat takeover last year as a member of the men’s rugby team, Batson was hired this fall to manage the account as a work study job, while previous ambassador Eleanor “Ellie” Levine ‘18 was studying abroad.

So what does it take to be a Snapchat ambassador—and who’s the guy behind the smartphone (and on the skateboard)? Let’s find out…

How do you find topics to feature on Snapchat? “For an Event Monday, I’ll talk to clubs I know are trying to grow and also look for events that I would like to recommend—like, I’m really passionate about wellness. I’ve talked to Peace House, MAD [Media Amelioration and Discernibility] House, or clubs like the Wheaton Investment Association. I’ve made a lot of connections through Snapchat. I make my outline of all the details and then I sort of just ramble through it. I usually do it in one go, because that’s the most authentic way. But most of it is me skating around trying not to fall off. On Thursdays, I get on my skateboard again and I go to a theme house, take a tour and promote the theme house however they see fit.”

What do you like best about Snapchat? “If I were producing content with my camera to be shown at a later date I would cut almost every scene I do in a Snapchat. The temporary-ness of Snapchat makes it feel a lot more casual, where I can misspeak and be like, ‘oh, that’s not what I meant,’ and continue on, and then 24 hours later if it was a bad mistake it’s gone. The other thing I like about Snapchat is, if i’m going to do a photo or video shoot, I’m going to use all kinds of fancy equipment and software. With Snapchat, it’s what you can record on your phone in 10 seconds—no splicing, no cutting; very basic editing. It really challenges me. I’ve gotten much better at my iPhone photography through Snapchat.”

What professional skills do you learn by running Wheaton’s Snapchat? “I think the biggest thing is developing confidence in my choices—knowing what to say and do, choosing what to talk about. It takes a lot of self-confidence to put up a story for hundreds of people to see and have nobody tell me it’s good first. It’s the opposite of what I do as photographer, where I do a full photo shoot, go through editing, look at it again, make sure the colors are correct, look at it again, get other people’s opinions. With Snapchat I’m just hitting the story button and hoping I didn’t mess something up.”

What’s your involvement with photography—is it a hobby, or more than that? “Photography is a big part of who I am. In high school, my parents got me a camera for Christmas. I read books [to learn about it] and invested money in equipment for the past four or five years, and now I have a few thousand dollars invested in it and I’ve made that money back and use that as a side income. I’m really passionate about it. I’m doing a lot for student clubs that are willing to hire me to shoot their events.”

Why did you choose neuroscience as a major? “I’ve known that I wanted to do research for a long time, and neuroscience was the direction I kept gravitating toward naturally. Neuroscience research is what I want to do with my life. As far as the practicalities of being a research scientist, being a professor would be the easiest way to go about that, so my long-term goal is to be a really weird old professor.”

Have you had any internships in neuroscience or a related field while at Wheaton? “I had a public health internship with the Counseling Center this past summer. I worked on forming an outreach plan. I wrote some events and programs for them, and I did a lot of research about seasonal mental health and wellness. That was a really great opportunity; I got to see how administration works, and I found out that I don’t want to work in a college counseling center. Back home I have a job working with people with mental illnesses. Next semester, through [Professor of Psychology] Rolf Nelson and our neuro department, I’ll be doing the ‘Practicum in Psychological Research’ course, doing research at Massachusetts Mental Health Center.”

Are you involved in any other student activities? “I’m the secretary for Active Minds and the co-founder of CHILL [Cognitive Health in Lyons’ Lives] House with our president Jay this semester; next semester I’ll be the president. I play rugby and I’m the secretary for that team. I’m the editor of photography for the Wheaton Wire, a photographer for the Wheaton Fund and the treasurer for Alternative Winter Break.”

Why did you want to create a theme house that focuses on cognitive health? “It’s about representation. What CHILL House does is we try to make mental health a mainstream topic on campus. We wanted to keep our mission really broad because we think that help for students with mental health issues on campus can manifest in a lot of ways. We’ve worked with ARTHive, the art history club—a club that I met through Snapchat—to do a talk about mental illness and art throughout history. We’ve worked with the Counseling Center and Active Minds on destigmatization. And then there’s the event we did earlier this semester where we bought 700 feet of bubble wrap and let people come pop it.”

Do you have a favorite Snapchat story you’ve done for Wheaton? “I really like walking into a theme house. Half the time I start off nervous thinking ‘What if this story isn’t good,’ and then it just becomes me and these people getting to know each other. I’ve met a lot of awesome people that I probably wouldn’t have met if I wasn’t doing Snapchat.”