Professor explores views on tobacco use 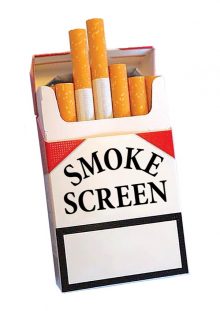 If you only smoke occasionally, does that make you a smoker? Surprisingly, new research by Associate Professor of Psychology Michael Berg reveals that many college students who may light up at parties or indulge in a cigarette or two on weekends do not consider themselves smokers.

Berg, coordinator of the Public Health Program at Wheaton, has been working with his wife, Linda Lin, a professor and chair of psychology at Emmanuel College, to look at issues of identity in tobacco using attitudes and behavior. Their research is shedding new light on an evolving student-health issue and may help build understanding on college campuses across the country.

They became interested in collaborating on the project to better understand what Berg calls “non-identified smokers” two years ago, when Emmanuel initiated a campuswide smoking ban, resulting in many conversations among students, faculty and staff about related health issues.

While tobacco use has steadily declined in the United States over the past decade, many American college students continue to smoke on a limited but regular basis. Young adults aged 18–25 have the highest rate of tobacco use of any age group in the U.S., with the majority smoking only intermittently.

As Berg and Lin interviewed students on both of their campuses, they learned that intermittent smokers were reluctant to admit that they were smokers. Much of this hesitation seems to be rooted in the deep social stigma attached to tobacco use, Berg says.

“We live in a time when heavy smokers are on the decline nationally and regular daily smoking is down,” he notes, “but social smoking is increasing and casual smoking is holding steady.”

What many of these casual smokers may not understand, he says, is the very real possibility of health problems associated with intermittent smoking. While the damage that a pack-a-day habit can cause is well understood and acknowledged among students, the occasional consumption of nicotine also can lead to serious problems.

“There are health risks among those who are even smoking one or two cigarettes per month,” Berg says, “though these occasional smokers usually are unaware or in denial of these risks.”

Berg and Lin developed an online survey to better understand what’s going on and possibly raise awareness among students. They asked survey participants two “smoking identity” questions: 1) Do you consider yourself a smoker? and 2) Have you smoked a cigarette in the past 30 days?

“What was surprising was that 64 percent of the 538 respondents who answered ‘no’ to the first question answered ‘yes’ to the second question,” Berg explains. Non-identified smokers made up 12.5 percent of the sample. Those in this group perceived themselves as less addicted and were more confident in their ability to quit smoking.

Discussions with some of the respondents revealed that, among those who admitted to smoking occasionally but not being smokers, there were common criteria that many observed that technically kept them out of the “smokers” category.

“There seem to be certain specific social rules that they set up for themselves that they feel keep them from being stigmatized as smokers,” Berg points out. “These include not buying their own cigarettes, but borrowing them from others; smoking only when drinking alcohol; only smoking on social occasions, and never alone.”

The research results have been submitted for review for publication in the Journal of American College Health, whose main readership is college and university health directors. “This is an important audience that we want to reach,” says Berg, the lead author on the paper. Lin is co-author and Maia White ’16, who served as a research assistant, also will be listed as a co-author of the paper.

Berg says he hopes the research will both inform health directors and motivate them to help students whom they may not even realize are engaging in a health risk.