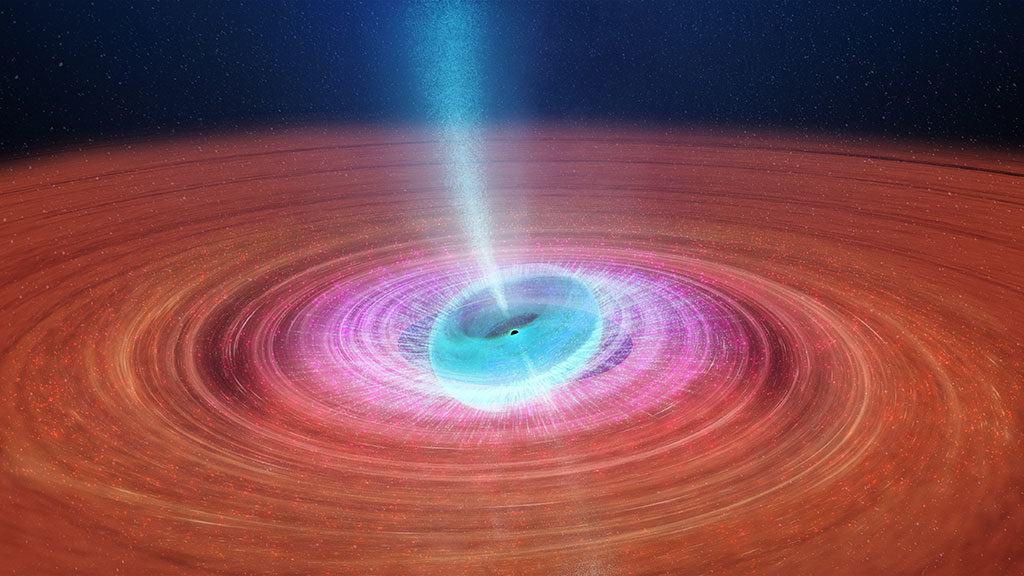 A Wheaton College astronomy professor participated in an international study that showed, for the first time, rapidly swinging jets of energy coming from a black hole almost 8,000 light-years from Earth.

Assistant Professor of Physics and Astronomy Dipankar Maitra contributed to research, published today in the journal Nature, that shows jets from V404 Cygni’s black hole behaving in a way never seen before on such short timescales.

The jets appear to be rapidly rotating with high-speed clouds of plasma—potentially just minutes apart—shooting out from the edge of the black hole.

Maitra said the observations, which took place in 2015, were unique, both for the rotation of the jets as well as the stupendous amount of energy being emitted. In fact, he and student researcher John Scarpacci ’17 observed the events using the college’s optical telescopes, and authored a paper on the data they collected in the publication, Astrophysical Journal.

“It’s unusual for jets from a black hole to be observable by optical telescope,” Maitra said. “But these were so strong that there was no doubt what we were seeing.”

The principal investigator for the new study published in Nature is Associate Professor James Miller-Jones, from the Curtin University node of the International Centre for Radio Astronomy Research in Australia.

The data in the paper uses observations from the Very Long Baseline Array, a continent-sized radio telescope made up of 10 dishes across the United States, from the Virgin Islands in the Caribbean to Hawaii. Assistant Professor Maitra was part of an international team of astronomers and astrophysicists involved in interpreting the meaning of the data.

“This is one of the most extraordinary black hole systems I’ve ever come across,” Associate Professor Miller-Jones said.

“Like many black holes, it’s feeding on a nearby star, pulling gas away from the star and forming a disk of material that encircles the black hole and spirals towards it under gravity.”

V404 Cygni was first identified as a black hole in 1989 when it released a big outburst of jets and material. When it erupted in 2015, telescopes around the world focused on the event, including those at Wheaton’s observatory.

“This was a totally unanticipated event and it made us change all our previous plans for the summer,” Assistant Professor Maitra said.

What made this event unique is that the jets from V404 Cygni erupted in different directions, which had not been observed before.

Associate Professor Miller-Jones said the change in the movement of the jets was likely because of the accretion disk—the rotating disk of matter around a black hole.

He said V404 Cygni’s accretion disk is 10 million kilometres wide, and the inner few thousand kilometres was puffed up and wobbling during the bright outburst.

“The inner part of the accretion disk was precessing and effectively pulling the jets around with it,” Associate Professor Miller-Jones said.

“You can think of it like the wobble of a spinning top as it slows down—only in this case, the wobble is caused by Einstein’s theory of general relativity.”

Study of such extreme events plays an important role in efforts to understand the fundamental laws of nature, said Assistant Professor Maitra.

“All of these observations appear to obey Einstein’s Theory of Relativity, which tells us how space, time and matter should behave near very strong gravitational field,”  he said. “Black holes are the most extreme thing we can find in the universe for testing these theories.”