There is something mesmerizing about sitting quietly in the darkness of a theater, focusing on the action of the lit stage. Distractions fall away. Personal walls get lowered. Space opens up for really hearing what is being said—especially when the subject matter is difficult.

As an actress, director and Associate Professor of Theater at Wheaton, Stephanie Daniels has experienced this from all angles.

“Theater has a unique ability to reveal and provoke empathy,” she says. “It allows people distance enough to see themselves and each other in nonjudgmental ways, which creates understanding.”

That is what she is hoping for with an upcoming project that will bring together Wheaton students, faculty and staff members to collaborate with the Trinity Repertory Company, the City of Providence, area colleges and community groups to create, present and perform in locally-based one-minute plays that address equality, inclusion and race. 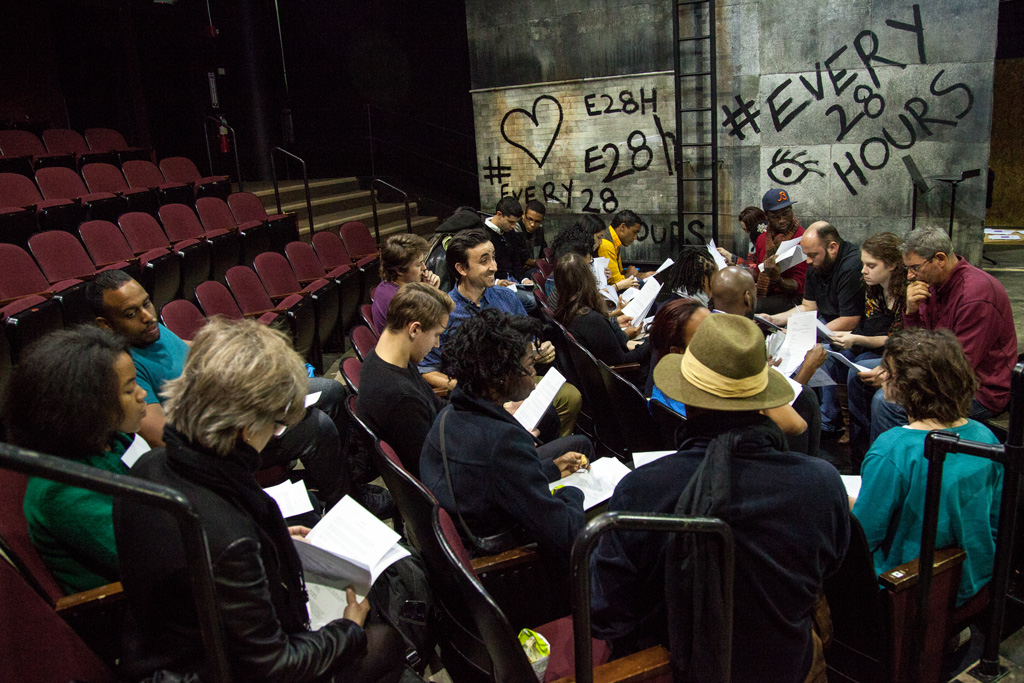 The collaboration is inspired by the nationwide theater initiative Every 28 Hours, which was co-created in 2015 by the One-Minute Play Festival and the Oregon Shakespeare Festival. The initiative was sparked by the outcry over the killing of Michael Brown, an African American, by a white police officer in Ferguson, Mo., in 2014. According to the creators, Every 28 Hours “focuses on the widely shared and contested statistic that every 28 hours in America, a black person is killed by the police, vigilante, or security guard.”

At Wheaton, a group of 40-plus selected students, faculty and staff members will come together on Saturday, October 1, in the Experimental Theatre, for a day-long workshop of intimate conversations about inclusion and equality. Dominic D’Andrea, creator of the One-Minute-Play Festival, a grassroots theater company, and Joe Wilson, Jr., resident artist at Trinity Rep, will lead the workshop.

What is said, heard and experienced in the Wheaton workshop will provide ideas for creating “moments” that will be combined to form the 60-minute production titled One-Minute Plays: Our Response that will be presented in Weber Theatre at Wheaton October 22 at 7:30 p.m. (Wheaton’s work on this is being sponsored by the Dale Rogers Marshall Visiting Artists Program Endowed Fund within the Evelyn Danzig Haas ’39 Visiting Artists Program.)

“I’m excited about this because one of my primary interests in theater is focusing on how we can use theater to create dialogue around issues that ignite strong feelings,” said Daniels. “Theater can be used as a provocative and inspiring, unifying tool to create social change.

“This is going to be useful for our community because of a desire articulated by our students to have more effective, dynamic, meaningful conversation and dialogue about what it means to be a person of color on campus. There have been efforts throughout last year to create a more dynamic and campus-wide conversation around diversity,” said Daniels, noting the ongoing work of the college’s Council on Inclusion and Diversity; a recent faculty workshop on diversity; and student-driven efforts like last year’s well-received Diversity Day.

Wheaton President Dennis M. Hanno has made this work an institutional priority through the initiative Building Community Together, which provides opportunities for members of the campus community to explore issues and concerns related to achieving inclusion and removing barriers.

Trinity Rep’s Wilson said he, too, is excited about the partnership with Wheaton and looking forward to facilitating the workshop. “We hope the conversation is a safe space within which people who share the same values, and commitment to the growth of our community, can develop the language, strategies, and an overall more empathetic approach in furthering the interest of our communities,” Wilson said. “By the nature of the event, we are also putting people in a room together who maybe normally wouldn’t be in that same room at the same time.”

On Monday, October 17, at 7 p.m., Trinity Rep will again present its own production of One-Minute Plays: Every 28 Hours, which was written last year in Ferguson, Mo. And, then on Tuesday, October 18, at 7:30 and 9:30 p.m., the theater will present a curated collection of the plays created by Wheaton and the other collaborators —Community College of Rhode Island, University of Rhode Island and the Southside Cultural Center—on its Providence stage.

Although one minute sounds like a short amount of a time, a lot can be done in 60 seconds even in just the way the body moves, said Daniels, who tried it out last spring in her First Year Seminar “Theatre and Social Change” when she first started discussing this collaboration with Wilson.

And D’Andrea pointed out: “Our methodology is about building up to include what is necessary. But ultimately when we have different perspectives, the equal space of a minute allows many perspectives to hang on this forum,” “Equal time means each voice is honored equally.”

October 18: Trinity Rep presents One-Minute Plays: Our Response, community created pieces, including those from Wheaton, in which some students, staff and faculty also will perform on stage, at 7:30 and 9:30 p.m.

October 22: Wheaton presents its One-Minute Plays: Our Response at 7:30 p.m., in Weber Theatre

One of the aims of the national initiative is to promote inclusion through the production of plays and concentrated programming created by local collaborators all over the United States. Read more.