How our college archivist held onto the past for the future

Zephorene “Zeph” Stickney Helmreich in August 2018 retired as the college archivist. We were touched by the tribute to her written by Kate Boylan ’04, director of the archives and digital initiatives—especially the part about how Stickney Helmreich inspired her while Boylan was an English major at Wheaton, ultimately leading her into a career that has come full circle. Here, she walks us down memory lane in the Marion B. Gebbie Archives and Special Collections, which is a major educational resource for students, faculty and alumni that continues to evolve in the hands of Boylan and Mark Armstrong, archivist and records manager. And just for fun we asked Stickney Helmreich, Boylan, Armstrong and work/study student Anne Tucker ’20 to share their list of favorite items from the archives.

The archives by the numbers

A few of their favorite things from the archives

We asked Zephorene Stickney Helmreich, Kate Boylan ’04, Armstrong and work/study student Anne Tucker ’20 to share their list of favorite items from the archives 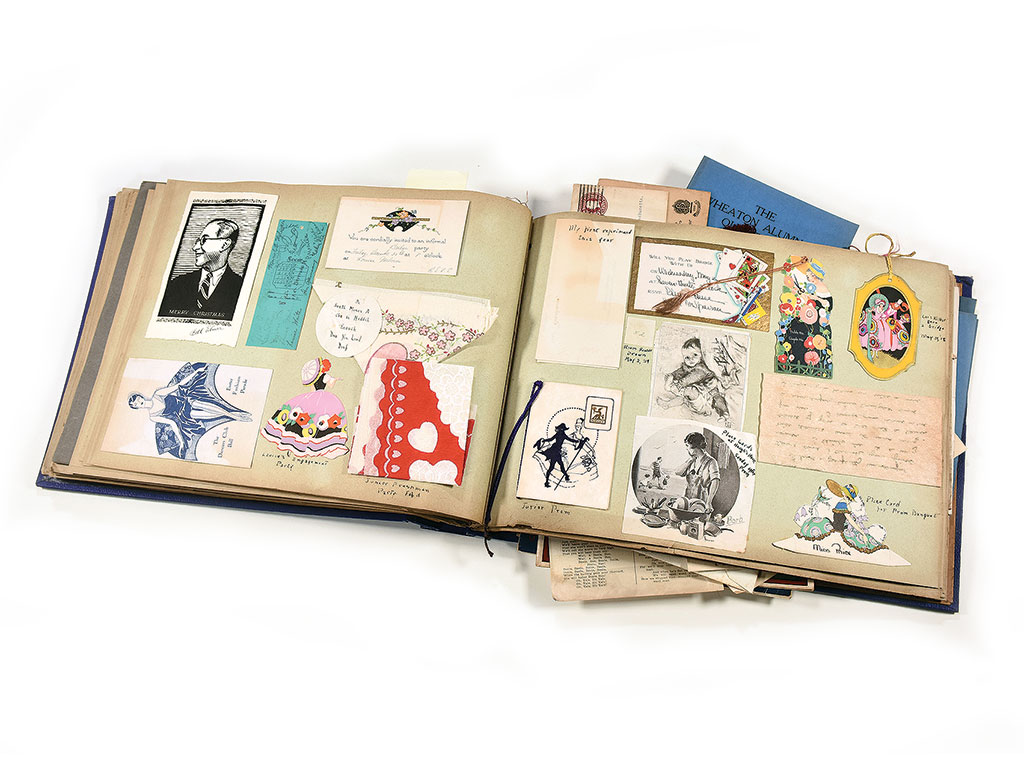 Student scrapbooks from the 1920s and 1930s: “This summer [2018] we looked through many of these scrapbooks for a project, and I really enjoyed how relatable they were. A lot of the women 100 years ago lived lives similar to mine. I was inspired to start my own scrapbook of my college experience.” 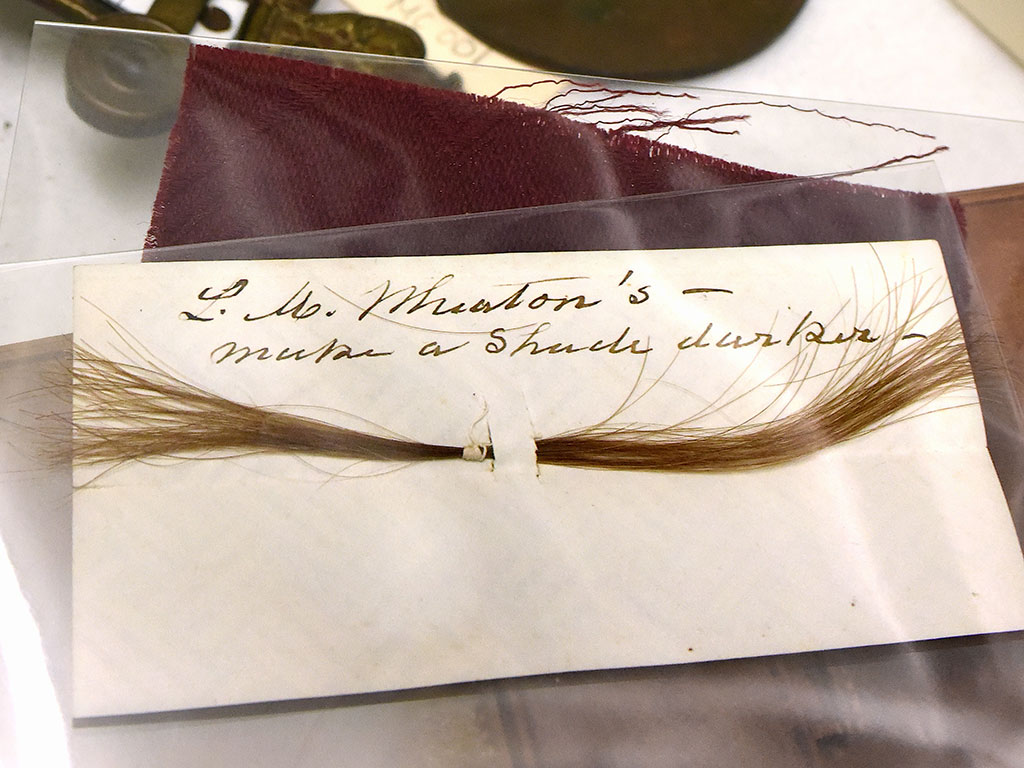 A lock of Laban Morey Wheaton’s hair: “I know saving and treasuring hair was common in the Victorian Age, but I think it’s odd, and I always laugh whenever I open the Wheaton Family Collection object drawer and see a lock of his hair neatly tied together and labeled just sitting in a bag amongst his other belongings.” 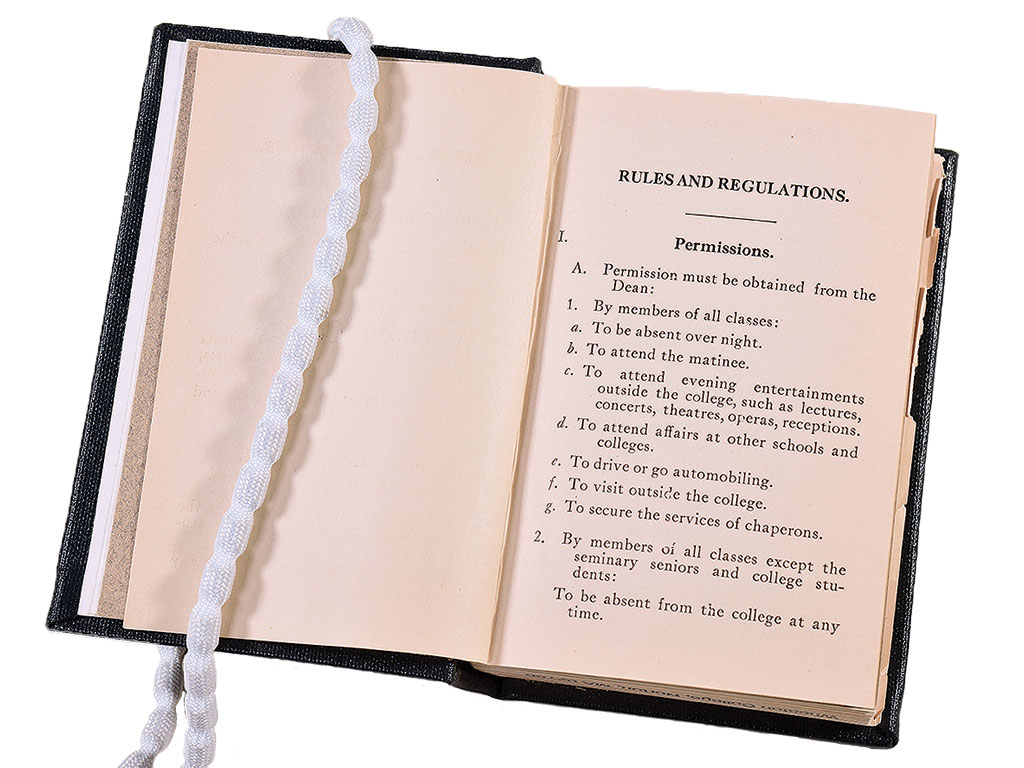 The rules students were expected to follow in 1875:.”My favorite rule is that students must not speak or throw things from the windows.” 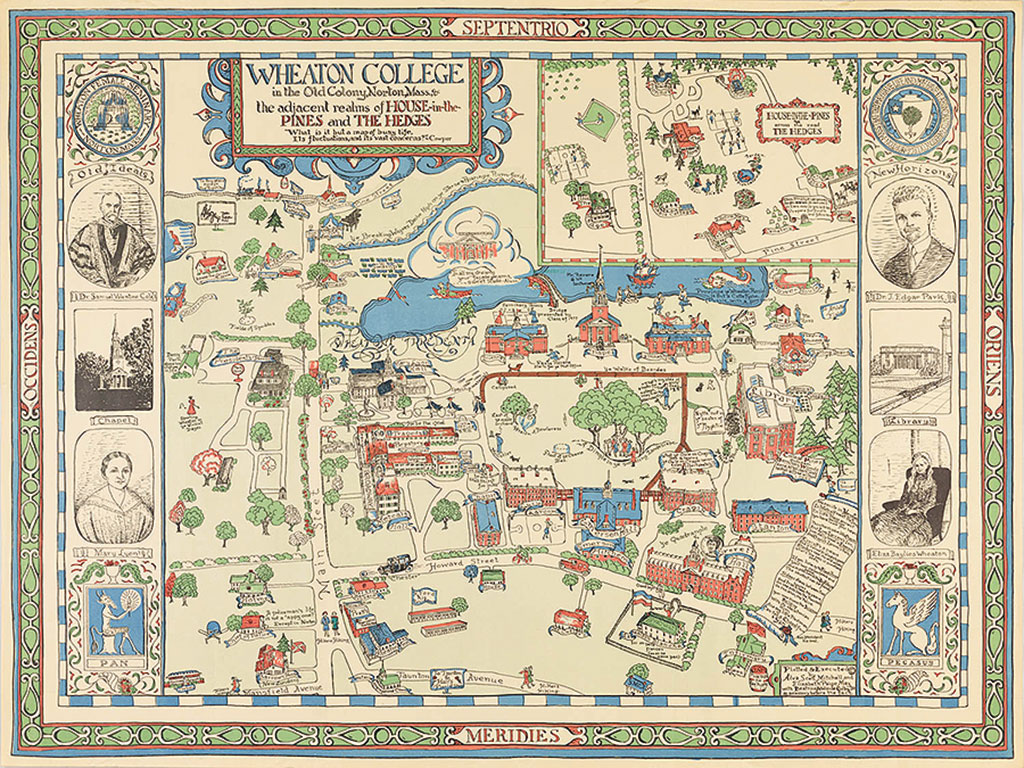 1929 campus map: “I love the map designed by Elizabeth Paige May and Alva Scott Mitchell Garfield in 1929. Copies were sold to raise money for the Student Alumnae Building, which now is the Balfour-Hood Center.” 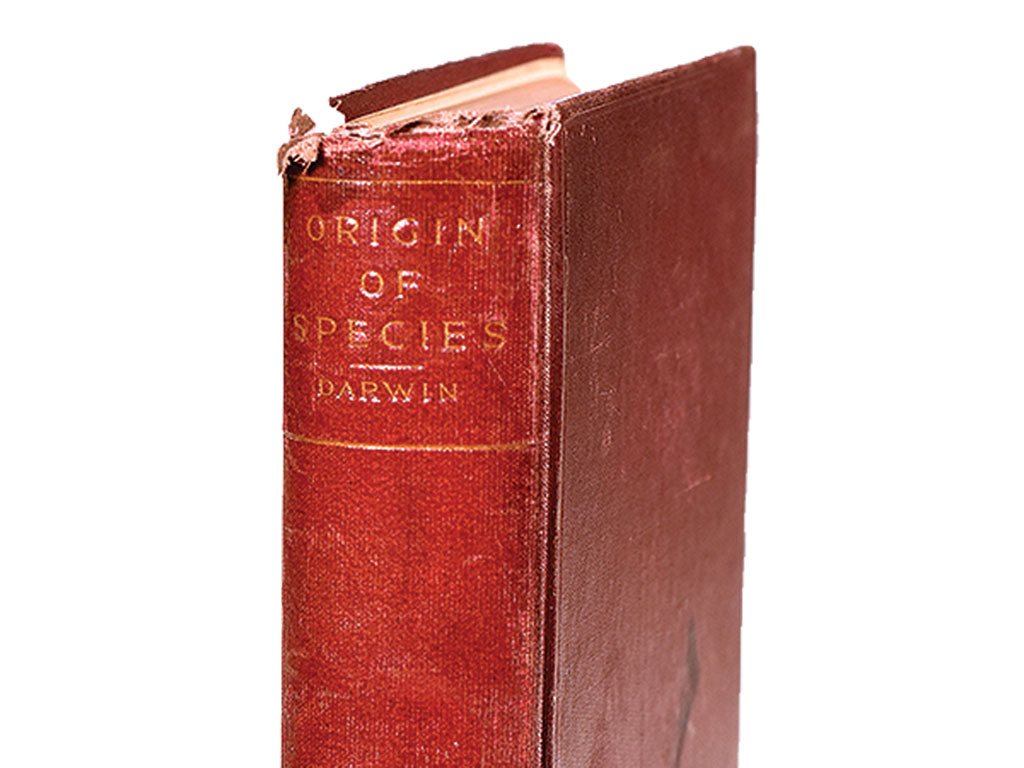 Early edition of Origin of the Species: “This is the earliest copy of Darwin’s seminal work that we have at Wheaton, and is in the original Wheaton Female Seminary Library collection. Access to this text means that Wheaton was progressive and revolutionary for its students: much as it is today.” 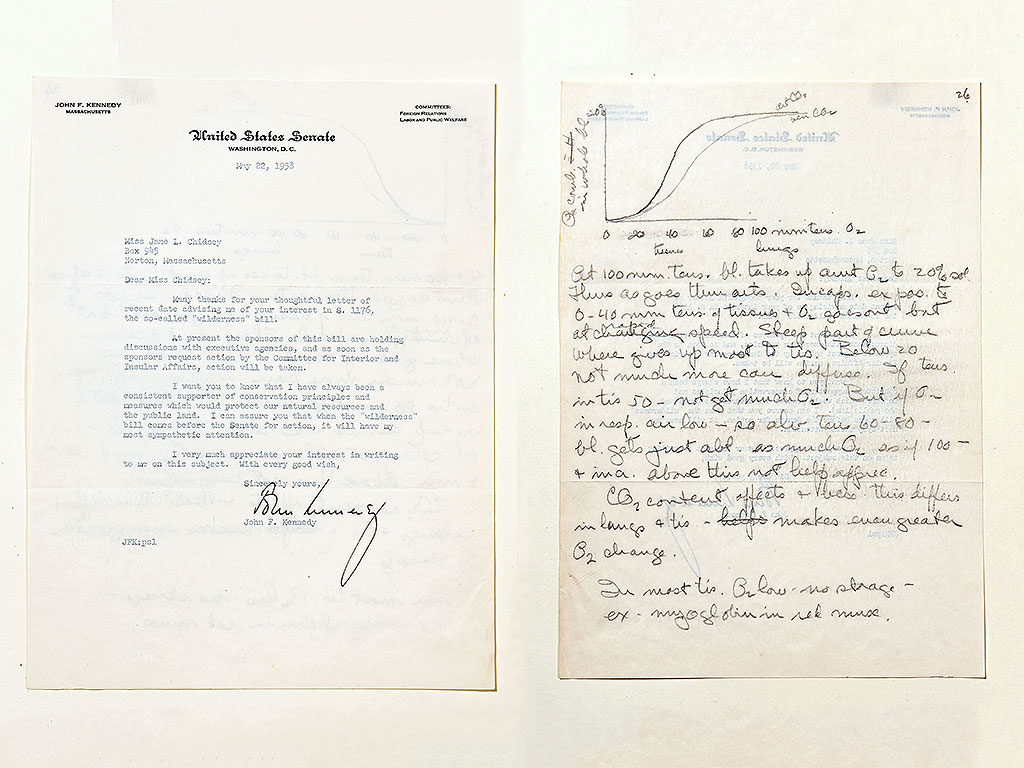 Kennedy letter: “Jane Chidsey had written to President [then Senator] Kennedy about her interest in a ‘wilderness bill.’ Not only was this student engaged and empowered to write her senator, but her senator was kind enough to respond personally. Jane kept the letter, and even did her math homework on the back. How was she supposed to know in 1958 about Kennedy’s quick rise through the ranks?!” [There are also letters from Yoko Ono, Theodore Roosevelt and Walt Disney in the collection.]

Diderot Encyclopedie: “We have an original edition [as it was published from 1763 through the 1780s]. It is a big and rare deal that Wheaton has a complete and unadulterated set of this encyclopedia; it was purchased in the 1950s for the cost of one student’s tuition. It’s a gem of our archives and special collections.” (Two books from the collection are on the magazine cover.)

Digital repository: “This is the place where new digital content [including the scholarship of students and faculty] and digitized historical content is being preserved and made accessible to the world.” 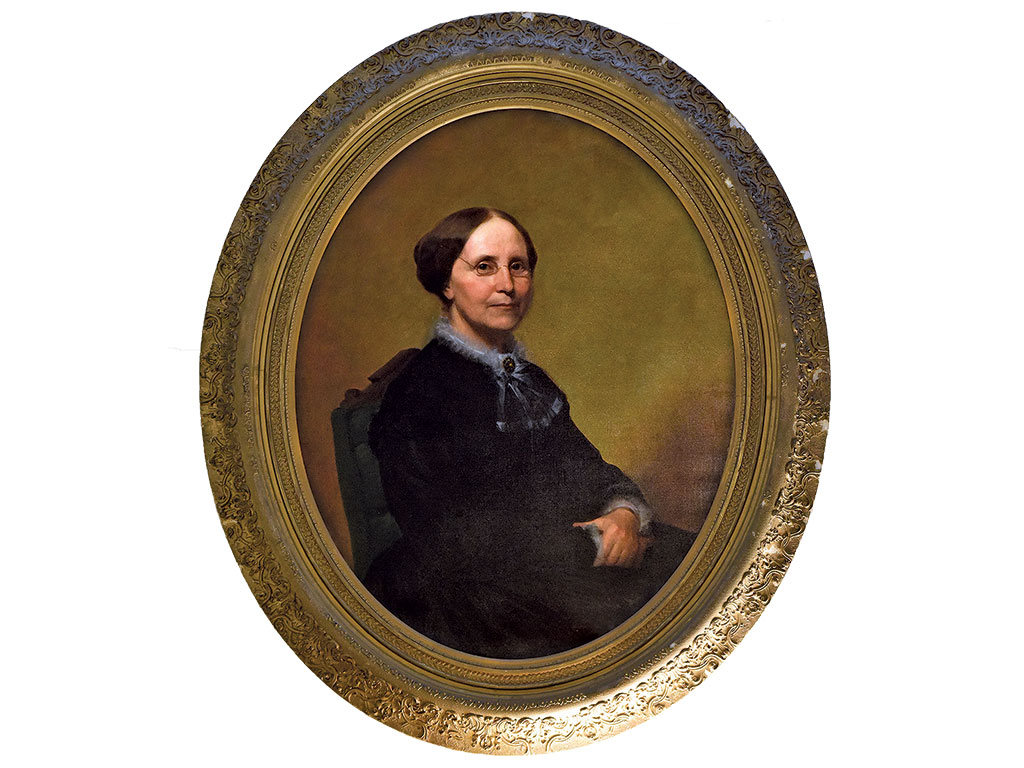 1872 portrait of Eliza: “In 1871, Wheaton’s trustees requested that Mrs. Wheaton sit for a portrait to accompany that of her late husband, Laban Morey Wheaton, painted by Boston artist John Harvey Young in 1866. The archives have been graced by these portraits for many years. In the 1920s, it hung in what is now the Holman Room in Mary Lyon Hall. Beryl Proctor Fenstemacher W1926 related the story that Dean Mina Kerr told her freshman class that ‘the eyes of Mrs. Wheaton are upon you’—and indeed they are—wherever one is in the Archives Reading Room, Mrs. Wheaton is watching.” 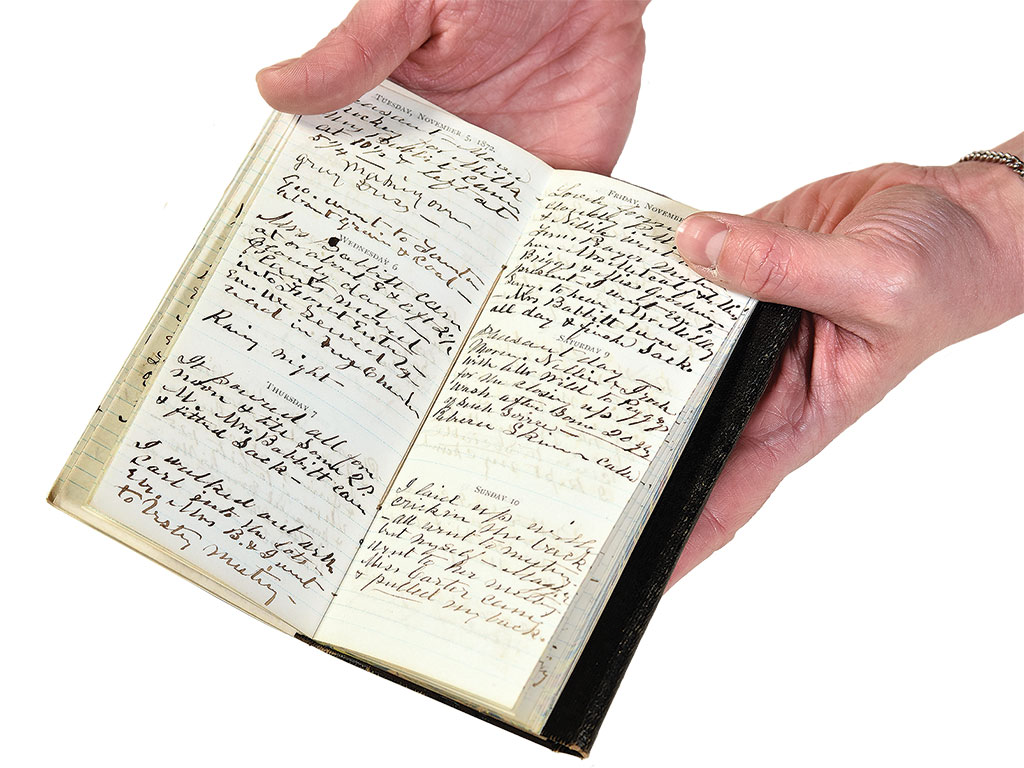 1872 Eliza diary: “We have only six of Mrs. Wheaton’s diaries, but this is one of the most interesting. Perhaps most important for Wheaton’s future, Mrs. Wheaton noted the Great Fire of Boston, and her consequent revision of insurance policies. The fire destroyed much of the business district, coming to within half a block of the property she owned on Winter Street, the sale of which in the 1920s formed the basis of Wheaton College’s endowment.” 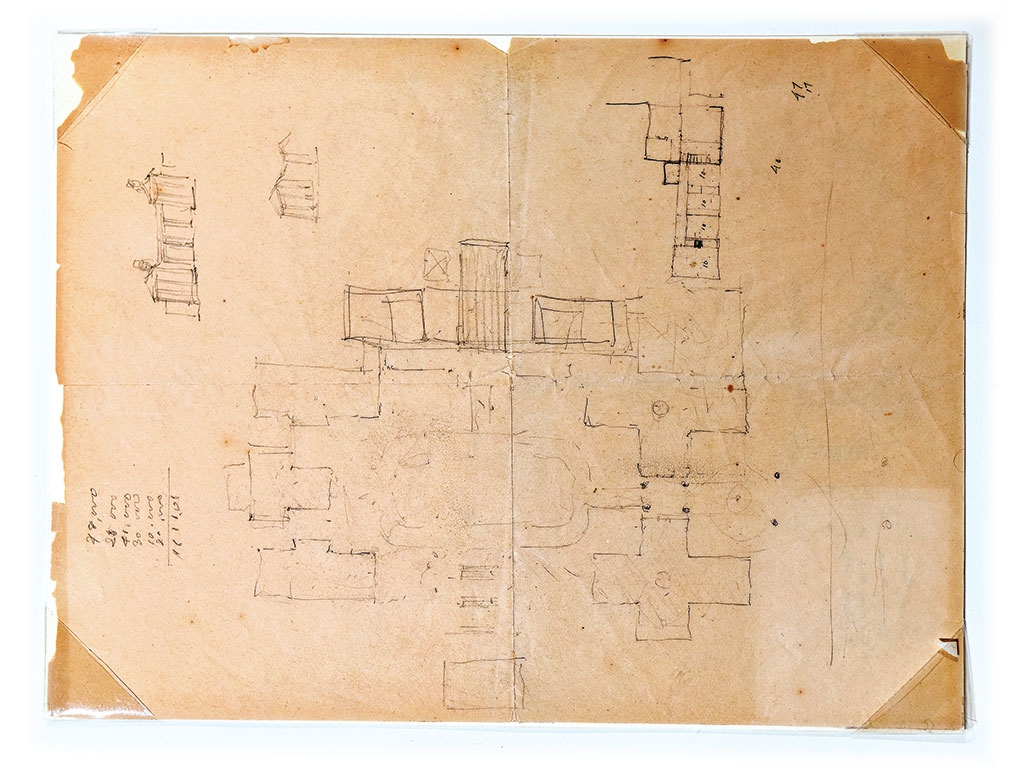 Ralph Adams Cram drawing: “Soon after the Rev. Samuel Valentine Cole agreed to become Wheaton’s first male president in 1897, he invited the young Boston architect Ralph Adams Cram to Norton. Could he envision a collegiate campus—a ‘court of honor’ of named buildings around a ‘town green?’ Indeed, he could. This seemingly innocuous scrap of paper, Cram’s first sketch of such a campus plan, was to set the course of Wheaton’s architectural transition from seminary to college.” 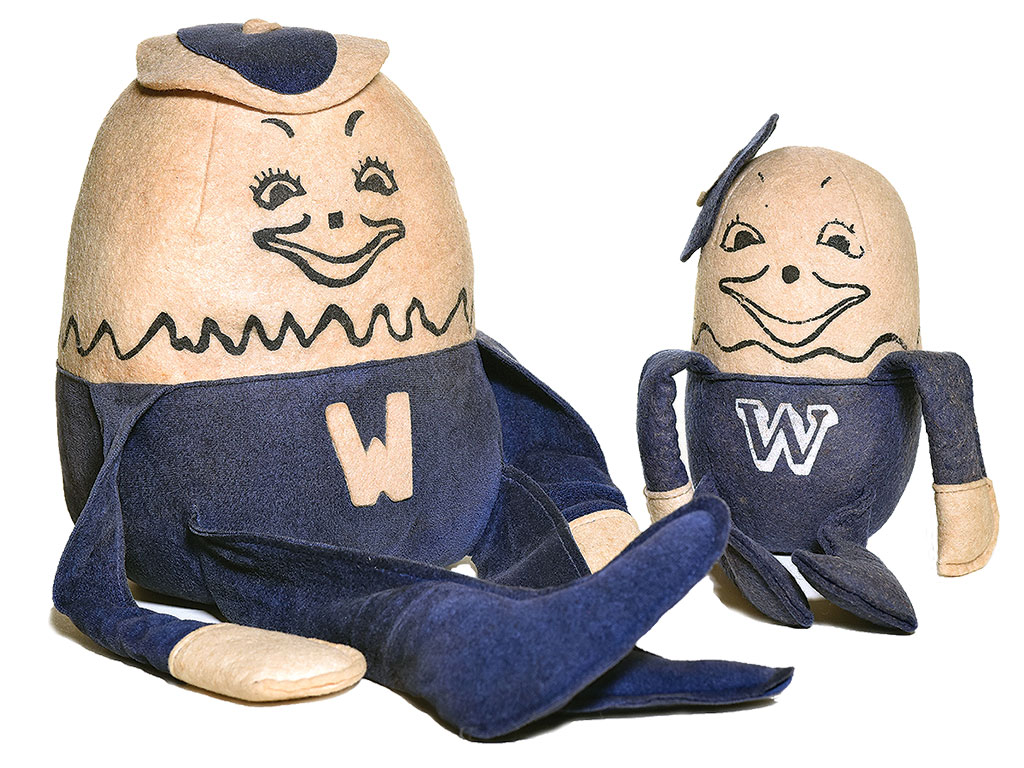 Humpty Dumpty characters: “These adorable Wheaton Humpty Dumpties were donated to the archives by Priscilla King Gray ’55, and with them came a story as sweet as they are. During her freshman year, Priscilla met Paul Gray, an MIT sophomore, on a blind date. As their relationship developed, Paul purchased these little fellows in the Wheaton Campus Bookstore as a Valentine’s Day gift for Priscilla. The stuffed felt toys sat on her bed throughout college, and moved with the family after Priscilla and Paul married. Paul became the president of MIT, and the chairman of Wheaton’s Board of Trustees. I’ve been so grateful that Mrs. Gray brought these whimsical characters back to Wheaton. They are the one and only pair I’ve ever seen. Romance in the archives!” 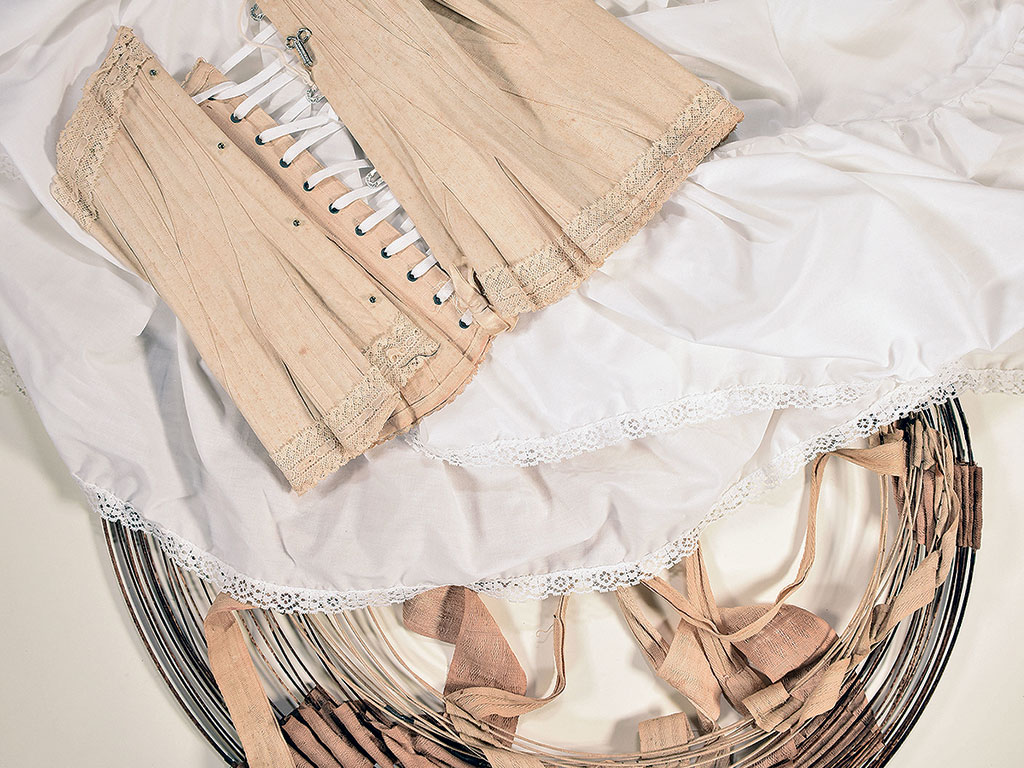 Corset and hoop skirt: “This classic Edwardian corset, and the reproduction 1860s crinoline petticoat have been actively in use in archives classes. While contemporary photographs, archival records, manuscripts and rare books all help to create a sense of the Victorian and Edwardian eras, there is nothing quite like being cinched into a corset and tying on a hooped petticoat for truly ‘feeling’ the era. I’ve often coerced young men into wearing the petticoat [and trying to sit down without revealing their ankles], but usually only women can fit into the corset, which was designed to reduce the waist by five inches. If you can scarcely breathe, it is tight enough.” 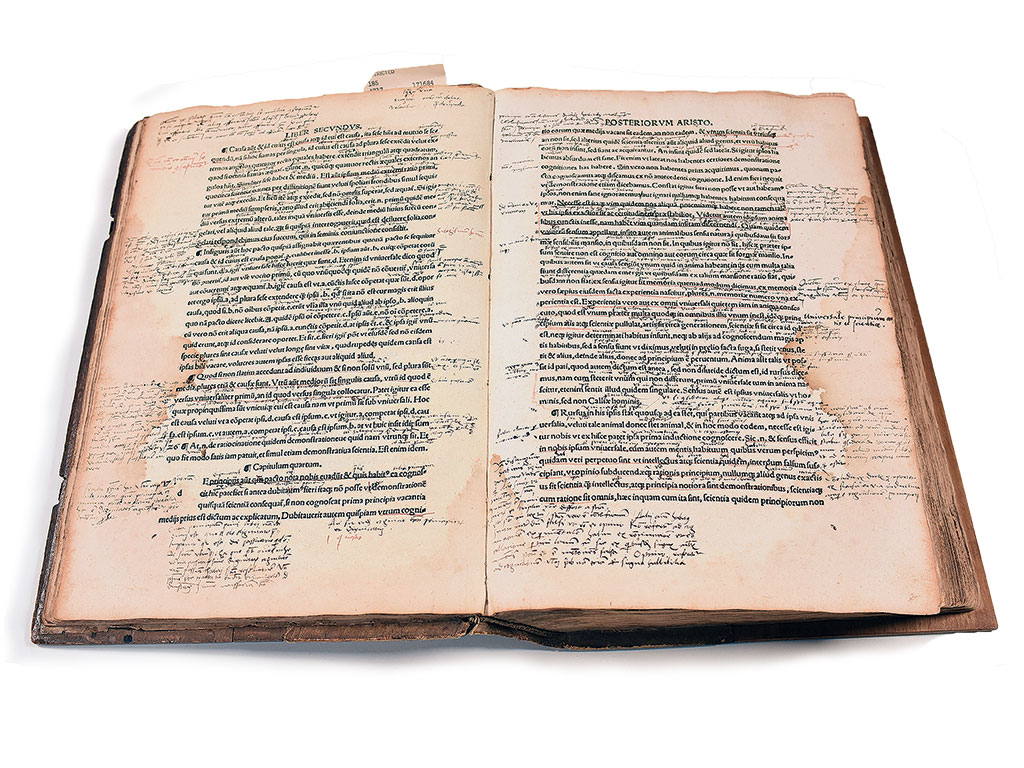 Aristotle: “A 1519 sammelband [a German word meaning “bound together”] of three of Aristotle’s most important works: The Posterior Analytics, the Physics and the Metaphysics. It is in a contemporary binding, and features spidery handwriting that is almost surely from the 1530s. The nature of the annotations suggests that the book was a reference work for a teacher who was compiling notes for a lecture on Aristotle for students.“ 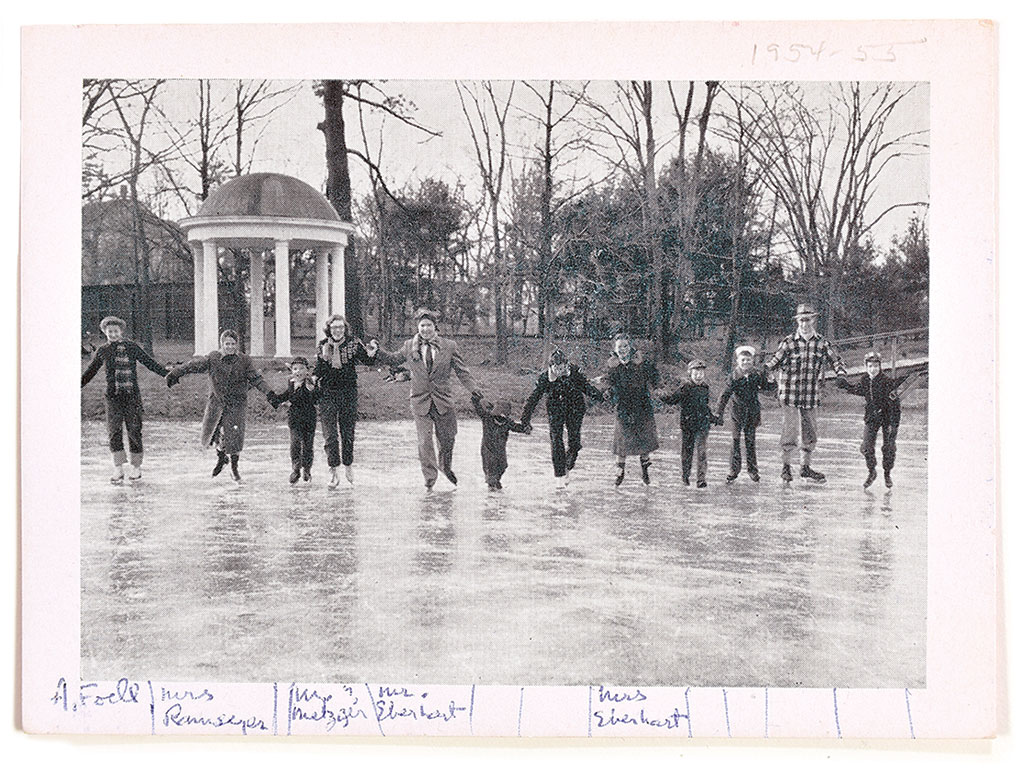 Eberhart skating on Peacock Pond: “Richard Eberhart, a famous American poet, spent one academic year here at Wheaton as a visiting professor in 1954–55. He orchestrated readings and visits of Edith Sitwell, Stephen Spender, Robert Lowell and Louise Bogan—some of the most enduring poets of the time.“ 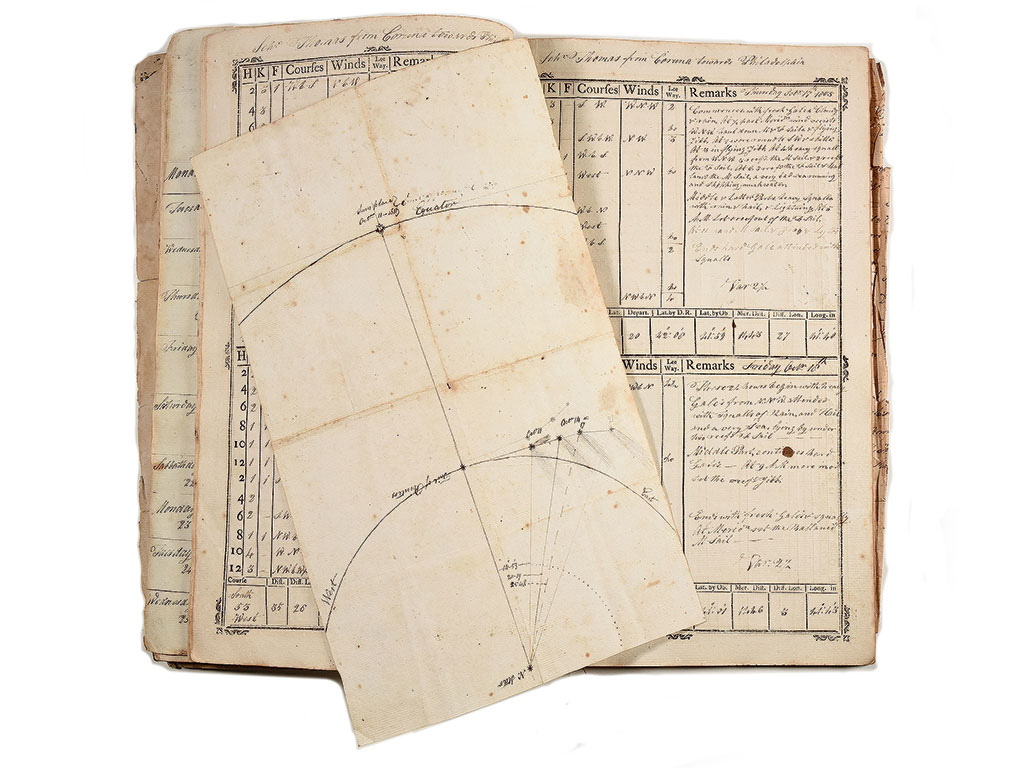 Ben Larcom’s papers: “We know an awful lot about Ben’s daughter Lucy, who remains one of my favorite Wheaton figures. Less is known about Ben Larcom, a merchant and sailor during the early days of the American republic. We have a hand-drawn star chart of his, for open sea navigation, as well as his letters home.”