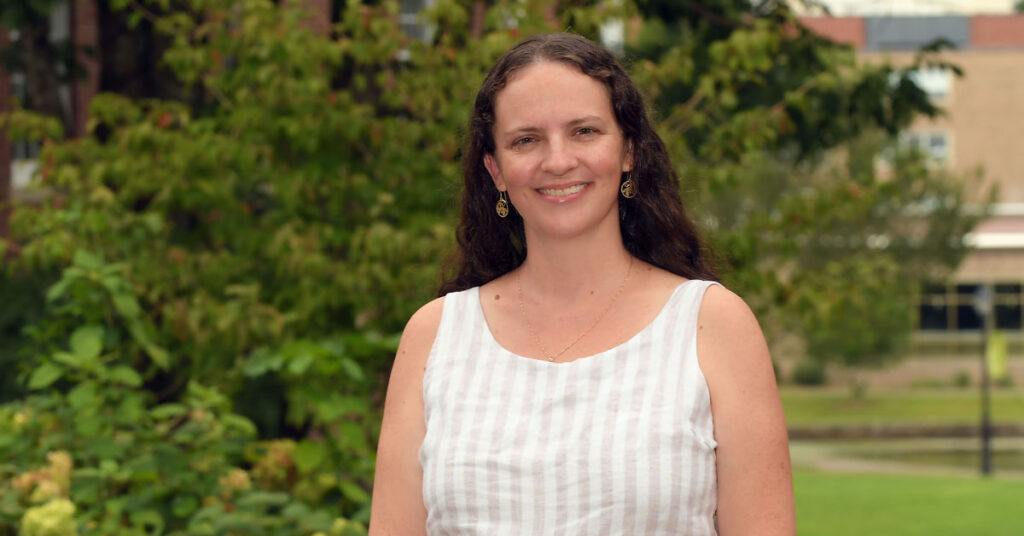 Educational background: “I went to public schools in Florida from K–12 and did my undergraduate at Guilford College, a small Quaker liberal arts college in North Carolina. I loved the small classes and deep relationships formed between students and faculty in the classroom and the learning that happened outside the classroom through volunteer work, activism and late-night dorm conversations. I’m excited to be at Wheaton, where I’ve already seen value placed on experiential education and how students are encouraged to follow their interests and pursue their passions.”

What led me to my field: “I double majored in anthropology/sociology and Spanish in college and concentrated in Latin American studies. I studied abroad twice, in Cuba and Mexico. When I graduated, I wanted to live in Latin America and felt that, to be a good anthropologist, I needed to get out in the world for a while before graduate school. So, I studied workplace health issues as a union organizer with Latinx meatpacking workers in the rural South, coordinated communications for a statewide coalition of immigrant-serving organizations and reported on public health as a health journalist with a global public health NGO in Cuba. My involvement with these groups showed me how important it was to make connections between academia and activism.”

Current research focus: “My research focuses on maternal-infant health and social inequalities. Before moving to Massachusetts, I lived in Havana, Cuba, for about a decade. It was a period in which economic and political reforms in socialist Cuba were making inequalities ever more visible and the focus of my Ph.D. was on how families in Havana were adjusting to these changes. In 2019, I began a community-based research project on birth and breastfeeding in response to a call from the Cuban Ministry of Public Health to understand Cuba’s low breastfeeding rates. As internet access has expanded rapidly in Cuba, virtual peer support groups have become important spaces for new mothers to access information and support, so my research uses digital ethnographic methods. I also collaborated with the Cuban Ministry of Public Health to develop training in breastfeeding support for local health professionals and make my research available to help inform public health policy.”

Most important lesson I learned in college: “College made me a stronger writer and, by doing presentations in classes, I learned skills that I have used at every job I’ve had since. Besides developing research skills, I think one of the most important skills I came away with was a second language. When I started college, I barely knew any Spanish and four years later, I was basically fluent.”

What I want every student to learn: “One thing I hope to teach students as an anthropologist is to try to see the world from the perspective of others. Why do people smoke when they know it is bad for them? Why don’t more mothers breastfeed? Part of the answer comes from understanding their world as they see it. The other part of the answer comes from exploring the history and structural conditions that surround that individual and their community and the choices they actually have. It is what medical anthropologist Paul Farmer calls a ‘historically deep’ approach to understanding current social realities. I want students to learn to think critically, to look for the backstory and go to the roots to understand the world as it is today. Nothing is a coincidence and it all makes sense if you dig deeper or change your perspective.”

What few people know about me: “I worked on the Hollywood movie ‘Fast and Furious 8’ when it was filmed in Havana. It was a surreal experience. I learned so much as an anthropologist as I watched cultures come into contact: U.S. and Cuban workplace norms, Cuban independent filmmakers, Hollywood lingo, bureaucrats on both sides, and historical tensions between Cuban sovereignty and U.S. imperialism. Oh yeah, and Vin Diesel and Michelle Rodriguez. It’s just another example of the weird and amazing doors that open when you are bilingual.”

What I’m most excited about teaching this academic year: “I am really excited about both of my classes this semester: ‘Inequality and Health’ and ‘Introduction to Public Health.’ One thing I love about the public health course is introducing students to a new approach to population health that really expands their ideas of what health is about. We move beyond the common focus on individual health—concerned with diagnosing and treating conditions at the individual level and trying to change individual health behaviors—to explore larger dynamics and social determinants of health and changing the structural conditions that explain the deep health inequities in this country. In ‘Inequality and Health,’ we will be asking why some communities are sicker than others to understand how it is that there are communities in the U.S. where the life expectancy can be 30 years lower than in areas just a couple of miles away.”