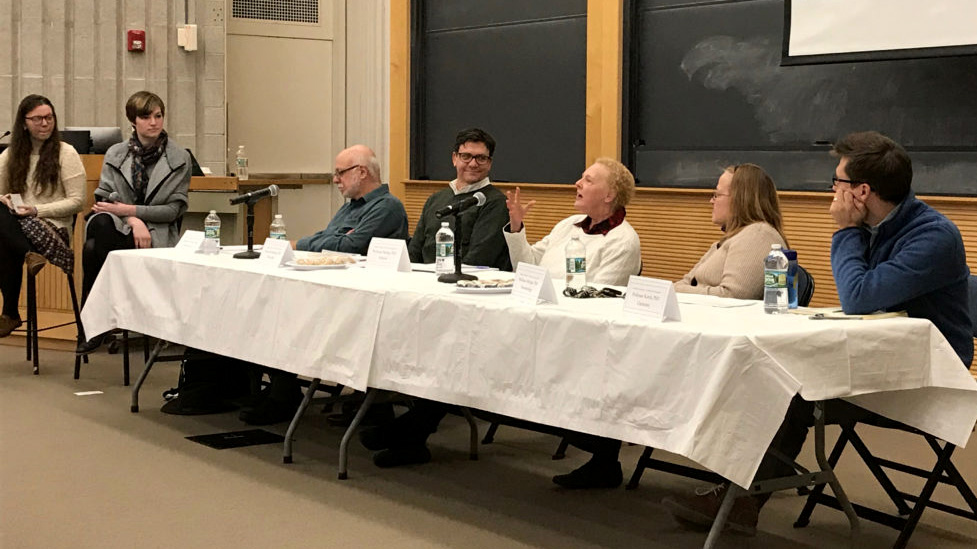 Is it ethical to genetically modify human embryos? Is animal testing a humane practice? What is the responsibility of scientists and the media to report accurate, evidence-based research, and avoid misrepresentation of facts?

Five Wheaton professors from the departments of anthropology, chemistry, philosophy, psychology and religion brought their own perspectives to these questions, and more, at a panel devoted to morality and science. The event was organized and hosted by the student-run Wheaton American Chemical Society. It attracted more than 100 students, faculty and staff to Hindle Auditorium on Friday, November 30.

Members of the student organization chose to investigate the intersection of science and morality, as “our understanding of morality can affect how we conduct science and our understanding of science can affect how we think about morality,” said biochemistry major and society president Amanda Swanson ’19. She moderated the discussion with Taylor Reis ’19, a chemistry major.

“Given the complexity of this topic, it is something that we can’t discuss enough. Since scientists have such a capacity to influence our world, it is important that they have an understanding about current moral theories and ideas to hopefully allow them to make moral decisions and pursue moral actions,” Swanson said.

The timing of the panel on science and morality was apt, as only a few days earlier a Chinese scientist had announced that he had modified the genes of twins to prevent them from contracting H.I.V.

Christopher Kotyk, assistant professor of chemistry, said that when he first heard the news, he acknowledged the benefits of such a genetic enhancement.

“Twenty-five million rats die every day for research to combat malaria, heart disease and cancer. On one part of it, you could argue, isn’t this our goal, to delete the possibility that you can have this disease? But on the other hand, we need to talk to the poets, and to the people who are creative, and ask, what are the downsides to this? You can pretty easily imagine how this can lead to [negative consequences],” he said.

One student said that everyone agrees that eradicating disabilities using a genome editing system like CRISPR is morally justifiable, but asked the panelists for their views on when it is no longer ethical to enhance humans.

“You presume there is common ground that it’s just to eliminate disabilities, but I would ask you to define disabilities,” he said.

Not missing a beat, Associate Professor of Philosophy John Partridge piped in, “Is aging a disability?”

The panelists also discussed how science can be misinterpreted and misrepresented by media.

“What’s the deal with the common belief that we use only 10 percent of our brain? It’s even in motion pictures. There is no basis in reality for this belief, and many neuroscientists wonder where this information is coming from,” she said.

Professor Morgan added that it’s not just news organizations who are responsible for accurately reporting the latest research.

“It’s also the responsibility of the scientists who are publishing to think in advance about how what they are going to publish might be misinterpreted or spun on TV news,” she said.

“Especially with vaccines, it can be really dangerous. Spreading the opinion that the measles vaccine is dangerous and causes autism has led to an increase in the number of deaths by measles,” he said.

Barbara Darling-Smith, assistant professor of religion, acknowledged that ethical beliefs are shaped by sociocultural factors. However, she said that scientists, and the public at large, should never stop questioning the morality of pursuing technologies that could do more harm than good.

“Even though we’re hard-pressed to say that there is a universal morality, I don’t think that recognition lets us off the hook. We should always make as much change as we can in what we feel is moral and always be open to revising our own ideas on what’s moral,” she said.