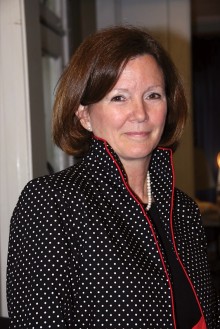 You never know what lies buried beneath a parking lot. It might be the last place to look for a king.

Yet, the skeletal remains of King Richard III, the British monarch whose 26-month reign in the 15th century was the shortest in English royal history, were discovered last year buried underneath a parking lot in Leicester, England.

Unbelievably, the bones were discovered on the first day of digging. The entire exhumation was celebrated as vindication for members of the Richard III Society, a group of admirers of the much-maligned king.

Sally Bachelder Keil ’72, the membership chair of the American branch of the Richard III Society, did not expect him to be found at all, let alone so quickly.

Though reticent to admit to it, Keil played an important role in the rediscovery of the lost king’s remains. At the 11th hour, two weeks before the dig was set to commence, the organizers were short on funds, in need of more than $17,000, or the entire project would be postponed indefinitely. Having only just taken on the role of membership chair, Keil digitized the society membership information, making contact information easier to access.

She leaned on her graduate degree in information science, and on her experience as the founder of AcquiData, an information-management software company, to help her with the project. The brand-new database of hundreds of Ricardians made it so that when Keil and her fellow society leaders heard of the need for money, they were able to swiftly send out the call for funds to the society members. In two weeks, more than $22,000 was raised from loyal Ricardians worldwide, saving the project.

It was a rather ignominious interment for royalty, despite the brevity of Richard III’s reign, and the scandal that surrounded it. The most well-known account of his life and kingship is found in Shakespeare’s play, written late in the 16th century, depicting Richard as a villainous and murderous man replete with a hunchback. Only two years into his reign, a rebellion led by Henry Tudor ended with Richard’s death during the Battle of Bosworth Field. The House of Tudor claimed the throne for the next century, until Elizabeth I’s death.

Keil and her compatriots in the Richard III Society believe that Shakespeare’s depiction of the king amounts to base and cruel slander, an example of Tudor propaganda penned by an advocate for their claims to the throne.

“Shakespeare wrote plays, not history,” Keil remarks during an interview over the phone.

Keil’s interest in Richard III began at an early age when she read a book in middle school about English history. As an English major, she didn’t specifically study the history of Richard III at Wheaton, but she notes that her time at the college helped her develop critical thinking, the kind of approach that would question the veracity of Shakespeare’s account of the king’s life. “You learn to think critically, to read critically, to analyze what you are reading, to move beyond what is in front of you; you aren’t learning how to do something, you are learning how to think.”

After a protracted legal battle over the remains, the king’s new tomb will be built in Leicester, where his remains were discovered.

As the legal battle wages on, the King Richard III Society, and Keil, will definitely be watching closely. And regardless of where the king’s remains are entombed, you can bet she will be there for the ceremony.

TheWorcester, Mass., Telegram and Gazette featured a story about Keil and the society last September.