Wheaton sophomore Hannah Zack ’18 has been sharing her written thoughts in a public forum since she was in high school, and her latest piece was featured recently on the Huffington Post college page. 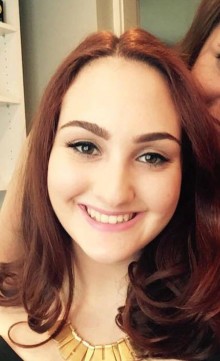 The blog post, titled “Why We Need to Reshape What It Means to Be a Person With a Disability,” explores Zack’s personal experiences and questions the way people with disabilities are judged by others. She shares two instances in particular where she was made to feel uncomfortable by others because of her disability—one in which a parking official thought she might be committing “parking fraud” by using a handicap placard.

“As a young person who continuously struggles with my identity, I find it tough to be fed different narratives of who I am supposed to be based on the way I look—visibly healthy and able-bodied—or who I am based on my body’s physical composition,” writes Zack, a sociology major from Brookline, Mass.

She argues that individuals who disclose a disability should not be viewed or judged merely on that characteristic.

“I identify myself as a person with a physical disability; I may be partially paralyzed, but it is a physical abnormality that affects the way I move my body,” Zack writes. “This trait does not discredit me or make me less of a human. It hasn’t stopped me from driving a car, binge-watching Netflix, succeeding in my first year of college or even jumping out of an airplane.”

Zack wrote about that last experience—skydiving—in her first article for the Huffington Post, “Be Your Own Rule Breaker,” in August 2014.

“A ton of people asked me to describe my experience, but I didn’t have the words to encompass how I felt. Instead, I wrote my thoughts down and it turned into a published article,” she said. “I e-mailed a few people and eventually got a blogger log-in to HuffPost. I submitted it, and a few days later I was featured on the HuffPost teen page.”

Zack had begun sharing her writing publicly a few years prior when during her junior year of high school her English teacher assigned a narrative essay that students would submit “to the world.” Hack posted her essay to TeenInk.com, a national website devoted to teenage writing.

“I used the essay to shine a light on cyberbullying—an issue that personally affected me,” she said. “I began getting messages from strangers telling me how much my story resonated with them. I know this is cliché, but that article set me free; I found peace with my situation.”

Zack’s most recent post was inspired by a Ted Talk delivered by Paralympic athlete Aimee Mullins and by the two negative encounters Zack mentions in the piece.

“Societal misconceptions of people with disabilities are so common, and I hadn’t seen an article that explored the topic,” she said.

“I got a flurry of text messages from friends congratulating me,” Zack said. “I was truly moved when I received a Facebook message from a man whose partner has a disability. He told me how it touched both of them, and a correspondence began.”

Zack said she plans to continue writing for the Huffington Post, as topics inspire her.

“My writing process has been an organic process, and I intend to keep it that way,” she said.