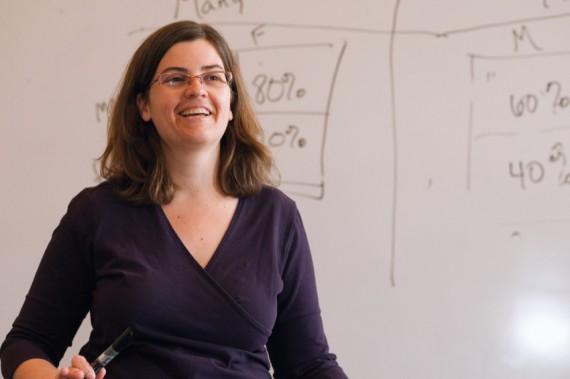 In 2014, the largest Ebola epidemic in history affected several countries in West Africa. Coincidentally, before the outbreak became a major media story, Associate Professor of Sociology Karen McCormack was already exploring health and crime epidemics in her First-Year Seminar (FYS) “Epidemics, Contagion and Inequality.” We talked to her about the course.

Tell us about the focus of your FYS and how the idea for it came about.

Over the past decade or so, many social scientists have used the techniques of epidemiology—the study of the determinants of health and the process and patterns of disease transmission—to learn about other social phenomena, like crime or even fashion trends. I’ve been fascinated by this attempt that parallels the work of sociologists to understand how contagion works, and how and why some people (as well as some neighborhoods, communities, and even states and countries) exhibit some degree of immunity from certain conditions. “Epidemics, Contagion and Inequality” allowed me to explore these patterns with students.

How does it relate to your research field?

I am interested in social networks and how information and ideas spread between people. In the era of social media, we’re used to thinking that everything spreads rapidly, but this is a selective process, and I’m interested in how things—from social relationships to understandings of events to behaviors—spread. One of the important factors that we explored throughout the class is the impact of inequality on outcomes across communities, states and countries. States with lower levels of inequality—New Hampshire and Vermont, for example—have healthier populations, with lower crime rates and higher levels of trust among people. Inequality is an important determinant of health and well-being, and exploring how inequality impacts people and communities has been a focus of my research.

How did you incorporate discussions about Ebola into the FYS?

We spent the second week of the semester reading about an earlier outbreak of Ebola, along with what was going on at the time. When I planned out the semester, I hadn’t intended to return to Ebola, but we did several times when it became clear that this was a much larger and longer outbreak than earlier ones. We discussed a number of issues, including the difficulties of providing care in rural communities, the mistrust of doctors in many remote villages, the fear in the U.S., and certainly the media response to the U.S. cases.

Why has it gotten so much media attention?

Because it is unknown and scary. There are many diseases that kill large numbers of people worldwide, like tuberculosis, which the World Health Organization estimates killed 1.5 million people in 2013, that receive very little media attention. Even when those diseases do re-emerge in the United States, there is little attention, for two reasons: first, because they are familiar and understood, and second because when something like TB kills in the U.S., it tends to afflict the poorest and most vulnerable populations. Ebola, on the other hand, has been studied for decades, but there is still a great deal about how to treat it that we do not know. While it has not been socially neutral—affecting all people equally regardless of class or status—there is a sense that we are all vulnerable. That vulnerability makes us more fearful, and this makes for a good news story.

What social factors pose a threat to health in cases like this?

A health infrastructure in West Africa that was inadequate for coping with a major outbreak meant that it took time and resources just to construct the facilities that could treat patients. The lack of a developed health care system increased risks for health providers and family members (often the traditional source of care). But stigma and fear can also pose a serious threat. When people avoid the health care system, or are concerned about possible retaliation on the job or in school or from their families, then they may postpone treatment and risk infecting others.

How can discussions such as the ones in your FYS help with the Ebola crisis?

The more that we can understand the social processes involved in disease transmission, the better able we will be to respond to crises. The more people talk openly, the more they will be able to respond rationally. I recall one week during the semester when many rumors of cases of Ebola in the U.S. were going around on social media, most of which turned out to be false. I think that because we were talking in class about the disease and the media coverage, students were better able to recognize these as rumors and wait for confirmation. But maybe more importantly, my FYS students wanted to take the conversation out of our classroom, and so we hosted an event where we streamed a webcast from Doctors Without Borders on the work that they are doing in West Africa to hear directly from health care workers who are dealing with the crisis.

What lessons can be learned from this outbreak?

First, that social networks and connections matter a great deal in the spread of disease, ideas and many other things. By understanding the process of the transmission of these things, we can intervene much more effectively. Second, that the news media is not simply a mirror for important events, but is actively constructing those events.