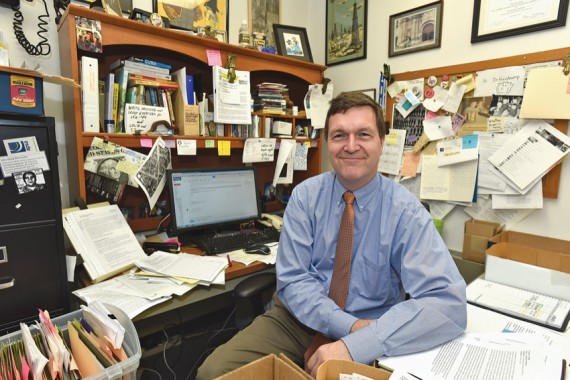 Gerard Huiskamp, professor of political science, teaches courses in comparative politics, political theory and political development that are infused with the sensibilities of political philosophy, especially concerning issues of democracy, inclusion and social justice. Recently, the professor, who has published articles on the micro-politics of patriotism and protest, was interviewed about patriotism for the personal finance website wallethub.com by writer Richie Bernardo as part of a 2015 study about the most and least patriotic states. Huiskamp made some interesting observations about what it means to be a patriot. We have reprinted the interview here.

What are the characteristics of a good patriot?

Most broadly, patriotism is understood as love of one’s country, and usually strongly implies the willingness to sacrifice individual well-being for the common good. This is conventionally expressed as devotion to the welfare of one’s country, the passion that inspires someone to serve her or his country, especially the willingness to risk one’s life in its defense. But patriotism as love of country and willingness to sacrifice is a generalized sentiment that must be actualized in practice, and one encounters different understandings of how patriotism is properly expressed, or operationalized, especially in response to perceived crises.

As a first cut, we may distinguish between two main types of patriotic strategies, or motive causes to action, which I call “deferential” and “inquisitive,” a distinction similar to the one made in the psychological literature between “blind” and “constructive” patriotism. Deferential or blind patriotism is distinguished by adherents’ propensity to acquiesce to authority on matters of national defense and diplomacy or, more specifically, by individuals’ tendency to uncritically agree with any governmental policy in times of “crisis.” Steeped in a sense of American exceptionalism, its guiding assumption is not so much a “my country, right or wrong,” as an enduring belief that the United States always stands on the side of right and freedom. By way of contrast, the inquisitive or constructive patriotic style allows for—even insists on—a citizen’s critical engagement with one’s country’s policies and actions, and opposition to these when justice demands.

From the point of view of a political democracy facing external threat, there are benefits to both patriotic strategies of action. The inquisitive style reinforces the republican obligation to check the use of state power, and also may be thought to lead to better decision making, resulting from debate and discussion. On the other hand, the deferential style offers benefits of decision-making efficiency, particularly important in times of war, given that the existence of war signals a societal crisis of potentially existential portent.

In the eyes of state decision makers, however, these benefits may not be experienced as equal goods, especially in times of perceived emergency. For while both deferential and inquisitive styles may recommend themselves in various ways to democratic war making, deferential patriotism offers clear benefits to state leaders in carrying out these leaders’ policy objectives with maximal autonomy and efficiency. At the systemic level, the collective effect of the deferential style of patriotism is to facilitate the mobilization of material resources needed to effectuate the state’s war-making capacity—both soldiers and money, or “blood and treasure.” Deferential patriotism also creates a wellspring of public support that allows state actors a significant sphere of autonomy, shielded from normal democratic pressures, to pursue state leaders’ foreign policy preferences unchecked. Inquisitive patriotism, by way of contrast, may be seen to constrain policy options.

Is there a link between socioeconomic class and level of patriotism?

Given that there are different modes or styles of patriotism, it doesn’t make much sense to talk about levels of patriotism along a single register. There are, however, some suggestive links between socioeconomic class and patriotic style. For instance, although studies have shown that socioeconomic class does not provide a strong predictor of the content of an individual citizen’s perception of a given foreign policy decision, Myron Rothbart and James C.M. Johnson [researchers from the University of Oregon] found that socioeconomic class is strongly correlated with differential modes of evaluating foreign policy information coming from the government. More specifically, they found that in weighing foreign policy decisions of their government, blue collar workers were considerably more likely to trust in and defer to state leaders’ judgment about what needed to be done, while white collar workers and professionals were more likely to make independent judgments about the policy, weighing the costs of the policy or their ideological agreement with the policy, respectively. These findings coincide conceptually with the patriotism styles referenced before, with blue collar workers utilizing a blind or deferential mode, and both white collar and professional workers processing information through constructive or inquisitive modes.

Should we be raising our children as global citizens first or as Americans first?

The philosophical literature on patriotism engages this debate on patriotism’s virtue quite directly, as patriotism is weighed against cosmopolitan humanism. In [philosopher] Martha Nussbaum’s reading, for example, patriotism is indistinguishable from nationalism in that it seeks the particular good of a singular society over and against the needs and interests of all others. She considers this to be especially corrosive in a society that considers itself based on democratic, egalitarian principles, given that such a society places itself in an instrumental position with the rest of the world, betraying the universalist principles that inform its legitimacy.

On the other side of the debate, proponents of patriotism have sought to argue for the possibility of a principled partisanship, or civic nationalism, in which universalist democratic values are operationalized in a specific geographical place and time. Unlike traditional ethno-nationalism, however, the ties that bind citizens together are political, rather than primordial. More specifically, this non-ethno-nationalist patriotism is wed to the values underpinning democratic states—fairness, equality, freedom, justice—and to derive its virtue from these values. Proponents argue that the moral force and collective benefit of these values are sufficient to create the thick identity required to hold citizens to each other, in their collective commitment to these principles, and simultaneously to the political system that affords them the protection of these virtues. Constitutional, or inquisitive, patriots are thus understood to pledge their allegiance simultaneously to this egalitarian republic and its foundational virtues; and the polity assigns its citizens the duty to stand in vigilance of these principles, committed to holding their country to these high standards, and necessarily to the defense of the country in which this political project seeks to flourish.