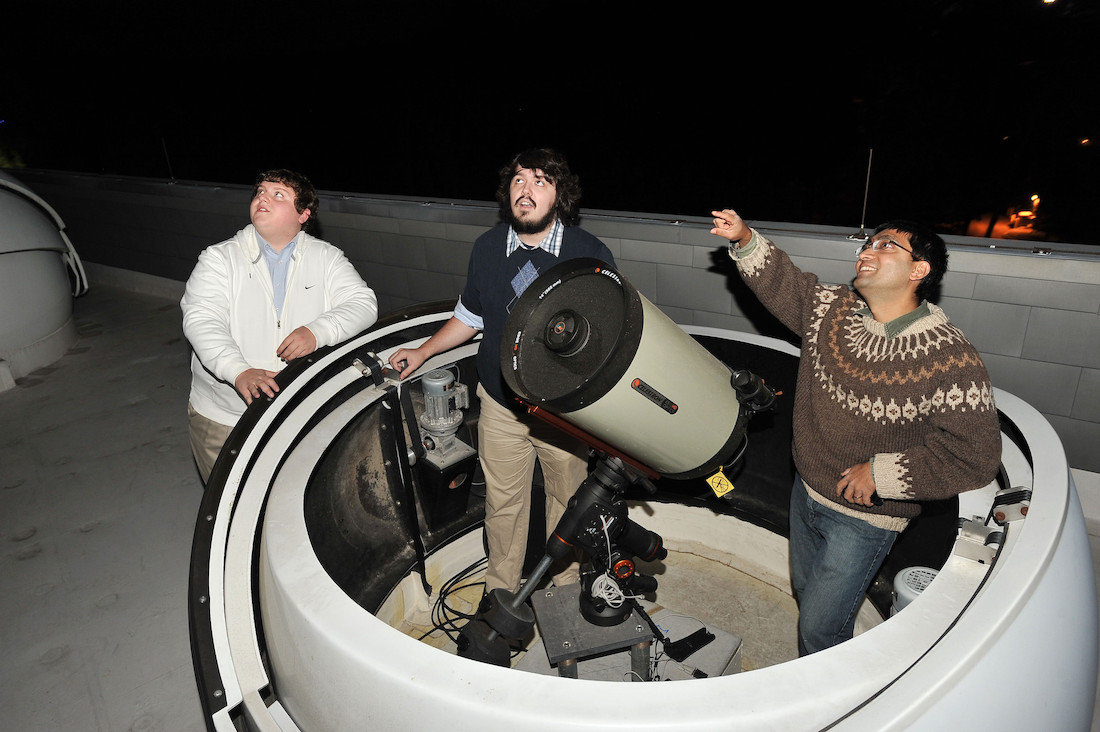 Mysterious and impossibly distant, neutron stars and black holes may hold the key to better understanding the physics of the universe. John Scarpaci ’17 and Ryan Dill ’15 spent the summer peering into this puzzling environment under the guidance of Assistant Professor of Physics and Astronomy Dipankar Maitra.

After receiving Wheaton’s Mars Faculty/Student Research Grant, Maitra applied to the NASA/Rhode Island Space Grant Consortium for matching funds. The two grants provided a faculty stipend, stipends for two students, and research funds that were used to purchase a computer for data modeling and storage.

Sitting out in space—at least 5,000 or so light years away from Earth—neutron stars and black holes don’t reveal much by themselves. Black holes in particular don’t emit light, so for researchers to study the environments around them, these entities must be seen reacting with objects near them. A common scenario that can be studied occurs in a binary, or two-star, system.

“Here, one star was more massive than its companion and went through its life cycle more quickly and ended up as a black hole or neutron star,” said Maitra. “All stars as they age tend to get bigger in size, and eventually, as the second one gets bigger, the very outer parts of that star can come into the gravitational sphere of influence of the first star. Then matter spirals from the second star to the black hole or the neutron star, forming what is called an accretion disk, and finally falls onto the neutron star or black hole. As the accreted matter spirals in, it gets hotter and hotter and moves very fast. Very close to the black hole or neutron star things move with speeds very close to the speed of light, and collisions between the particles make them so hot that they’re essentially emitting X-rays.”

With the use of space telescopes on various satellites, researchers can analyze wavelengths emitted from these accretion disks.

“Problem solving was a constant task all summer,” said Scarpaci, who wants to pursue astronomy research in graduate school and beyond. “Whether it was actually working with the data, determining optical brightness or just plotting the data to see how they correlate with one another, there was always something that had to be sorted out before I could get my much-anticipated results.”

Dill, a physics major with a special interest in astrophysics, followed up on preliminary work completed earlier in the year by Allegra Kurtz-Rossi ’15. Using data recorded by NASA’s Swift satellite, he analyzed the environment around a newly discovered X-ray binary system, fitting data into established computer models.

“The best part of the project to me is the sense of accomplishment from getting good results. I’ve written up a few scripts that were necessary in the process of plotting the results of the data fits, and seeing them work properly after the work I put into them is satisfying, especially since I’d had very little experience with scripting going in,” he said.