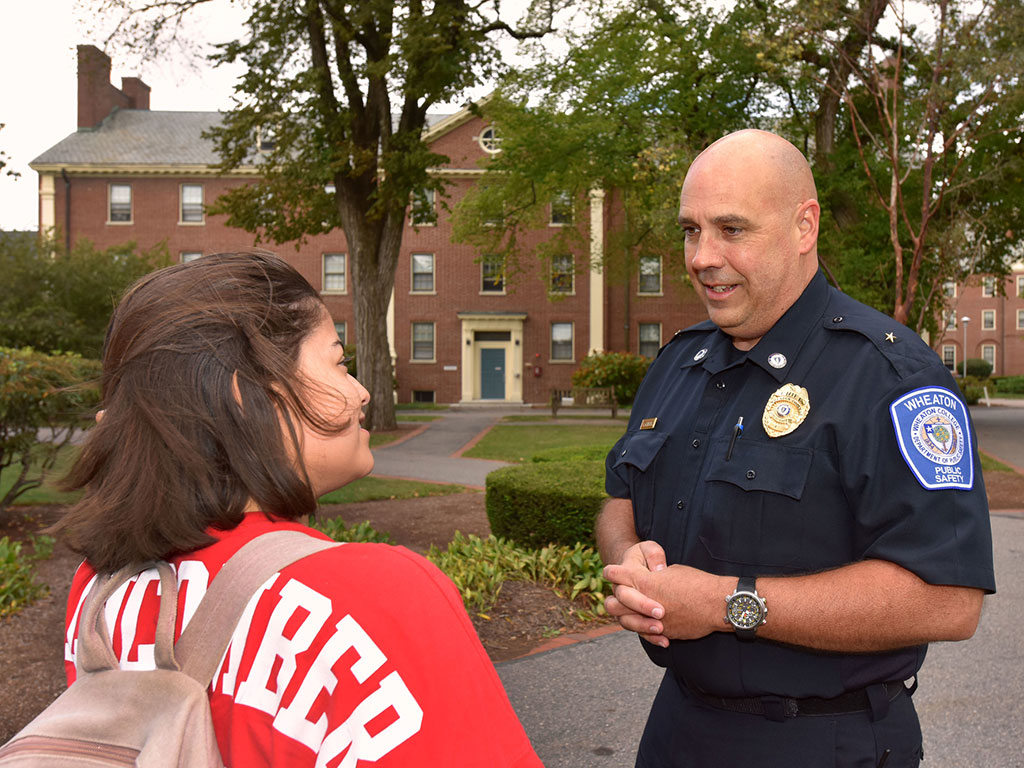 Chief Robert Winsor plans to leave his car in the Campus Safety Department parking lot most days. The new head of Campus Safety prefers to walk to meetings, saying that each trip across campus is an opportunity to get to know students, faculty and staff.

“Every time that I run into someone while walking across campus and can take a few moments to chat with them or just say ‘hello’ to a person that I haven’t met before, I think that’s an important opportunity to be building relationships,” said Chief Winsor, who took command of the department in early September.

The emphasis on building community is a central focus for Winsor, who has nearly 30 years experience in law enforcement and public safety. For him, it can take many forms—participating in campus-wide projects, attending student events and fundraisers and cheering on the college’s athletic teams.

Vice President of Finance and Administration Meghan Kass said of the new chief, “Rob brings to Wheaton a strong background in municipal law enforcement and campus safety, as well as a demonstrated commitment to community policing and building relationships.”

Winsor comes to campus most recently from Lasell College in Newton. He began his higher education career at Rhode Island College. Prior to that, he served more than 25 years in local law enforcement, including two decades as a member of the Pawtucket Police Department.

“I had known my entire life that I wanted to be a police officer,” he said.

Before becoming an officer, however, Winsor served three years in the U.S. Air Force.

“I took the opportunity to do something totally different just to be sure that law enforcement was what I really wanted to do,” he said.

In the armed services, he worked as an air traffic controller.

“It’s the best job that anyone could ever have in the service. I was a tower air traffic controller. I was stationed at Kadena Air Base in Okinawa, Japan,” he said. “I dealt with every type of aircraft that the service had at the time, including the SR-71 reconnaisance aircraft stationed on our base during the Seoul Olympics in 1988. It was an experience that was a big part of my life.”

Winsor considers himself fortunate to have found a second career in college public safety.  “Going to work in higher education was probably the best career decision that I’ve made,” Winsor said.

“Working as a campus safety officer on a college campus is very different from municipal policing. Municipal police officers have a large area to cover,” he said. “Our patrol area is confined to the campus. It gives us the opportunity to get to know the members of the community by working together on projects and through casual interactions.

“Wheaton is a great institution. The campus is beautiful, it’s in a great setting and it has a strong sense of community. I’m thrilled to be here, and I’m looking forward to making a contribution to the college.”