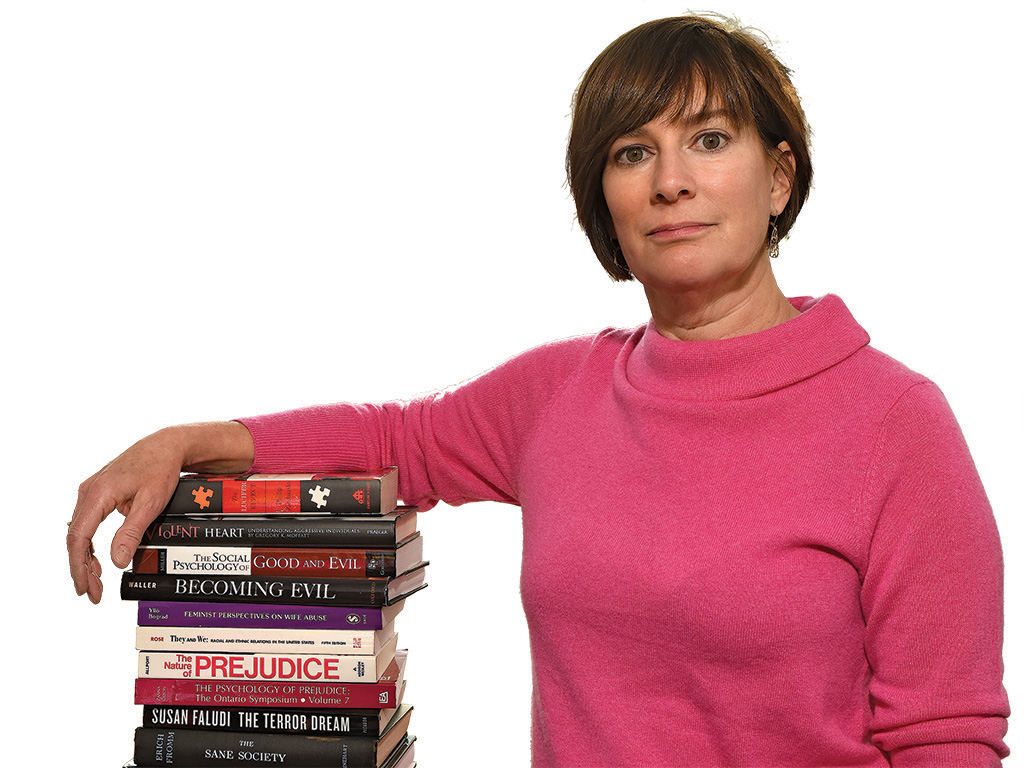 I originally came up with the idea for this First-Year Seminar “On Becoming Evil” several years ago. After news stories broke about U.S. soldiers torturing Iraqi prisoners during the Iraq War, I started thinking about how it is that seemingly normal, healthy individuals can, under certain circumstances, become capable of carrying out horrible (even evil) acts.

These cases always come down to the question of whether there are a “few bad apples” who do evil things when they find an opportunity or whether there were influences in the situation that made “good apples” do bad things. There is a lot of evidence in social psychology that normal people will do awful things if the situational forces are strong enough.

Social psychologists such as myself view human behavior as not simply a function of one’s individual character but rather as something largely shaped by external forces. Although we acknowledge that there are individual differences in behavior and that some people may respond to particular circumstances somewhat differently than others, the power of the situation influences everyone.

This idea is contrary to our natural impulse as human beings, which is to attribute others’ actions to their internal dispositions, a bias known as the fundamental attribution error. For example, if someone is rude to me, my tendency will be to think they are a rude person rather than thinking they might have been having a bad day. Many, many studies have demonstrated this well-known bias.

One of my goals for this course is to help students to become aware of this tendency and learn to override it.

We discuss a number of classic social-psychological experiments that demonstrate that situations can be so powerful as to overtake our personal beliefs and values, and we sometimes find ourselves doing things that are completely opposed to our personal moral code.

One of the classic experiments that demonstrates the power of the situation is the Stanford Prison Experiment conducted by Philip Zimbardo in 1971. In this study, 18 normal, healthy college men were randomly assigned to be either prisoners or guards in a mock prison created in the basement of the psychology department building. The point of the study was to shed light on the psychology of the prison experience, and the simulation was set to run for two weeks. However, the experiment had to be stopped after just six days because the guards had become so abusive and the prisoners so traumatized that it would clearly have been unethical to continue.

Why did these normal young men turn into caricatures of stereotypical sadistic prison guards in just a few days? According to Zimbardo, the role they were taking on turned them into such people. That basic proposition, that normal individuals can be transformed into instruments of evil, is the focus of our discussions throughout the “On Becoming Evil” course.

At the beginning of the semester, students attempt to provide a definition of evil. We discuss how difficult it is to come to an agreement about what evil is, particularly given the way views change over time.

For example, we consider the fact that slavery was not always deemed evil in this country, though nearly everyone would label it that way today. We then consider whether evil lies within an individual or not; that is, are there evil people or just evil acts?

If evil is within a person, is it a function of nature or nurture? We examine examples of individuals who are born with a tendency toward cruel behavior by reading an article about children with psychopathic tendencies (generally diagnosed as having a conduct disorder), whose neurological differences seem to render them unable to feel empathy (a “nature” explanation for evil).

On the other hand, we consider evidence that individuals can become capable of
cruelty as a result of experiencing abuse as children (a “nurture” explanation).

The goal is not for students to adopt a particular position on the central questions (e.g., that evil is inherent or learned) but rather to think critically about the evidence on both sides.

Our main text is The Lucifer Effect: Understanding How Good People Turn Evil by Zimbardo (mastermind of the aforementioned Stanford Prison Experiment), in which he describes the experiment in great detail and considers the implications of the findings. We also discuss other classic social-psychological studies, such as Stanley Milgram’s experiments on obedience that revealed that many individuals will obey the orders of an authority figure to administer painful shocks to an innocent person. We next apply the findings of these studies to a range of real-world examples of evil, such as genocide, torture and gender-based violence.

Among the real-world examples we consider is the scandal of abuse of prisoners at the Abu Ghraib detention facility that broke in 2004. Most Americans were shocked to learn that men and women in uniform had carried out horrible acts of physical and sexual abuse of Iraqi prisoners and documented them in photographs.

At that time, of course, there was great debate about whether these soldiers were just “a few bad apples” as suggested by many in the government and armed services or whether there was something systematic in the way the prison was managed that led to widespread abuse. That is, was abuse normalized and even encouraged by the situation?

Zimbardo draws parallels between the abuse at Abu Ghraib and the abuse he observed in his simulated prison. We delve into the possible situational and psychological factors that might have made seemingly normal individuals turn into torturers, such as the hierarchical authority structure, horrible conditions, external threats and dehumanization of the prisoners.

I aim to facilitate both intellectual and personal development of students in this course. I hope that they see how scientific studies can shed light on real-world problems.

Milgram’s obedience experiments, for example, were spurred by a desire to understand how the Nazis were able to carry out the Holocaust, specifically whether, as some of them claimed, they saw participation in a genocide as merely carrying out orders.

I also hope that students will become aware of the importance of guarding against the situational forces that might make them do things that are not consistent with their ethical and moral belief systems.

Much of the research we discuss suggests that human beings are quite vulnerable to becoming instruments of evil. I hope that my students will become less vulnerable as a function of their new awareness of the factors that make evil possible or even likely. We also consider the distinction between understanding the causes of bad behavior and excusing it. Explaining behavior is not the same as justifying it. We still have personal responsibility.

I see this purpose as extremely important. Despite the many proclamations that human beings have made that genocide will never occur again, it unfortunately has and seems to continue unabated today. Only if we see that evil is not something that resides in “them” but can also be carried out by “us” will there be hope for a better world.

The material in this course could make one feel a bit hopeless due to the sad and horrific nature of the examples. So, we end by discussing the positive side of human nature, particularly the newer positive psychology movement that focuses not on what is wrong with people but what is right with them. We discuss healthy functioning, resiliency and what brings true happiness to one’s life, as well as heroism—both how it has been defined by psychologists and how we ourselves define it.

Ultimately, I hope that this course helps students to resist forces toward evil and instead become heroes.

That’s not too much to ask, is it?

Email your answers to magazine@wheatoncollege.edu