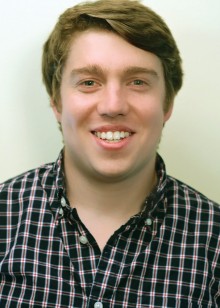 Unsure of what to do after graduation (but pretty sure he didn’t want to work in a cubicle), Colin Fahey’11 started brainstorming ideas with high-school pal Scott Pirrello, a Merrimack College grad. After “rattling off bad idea after bad idea,” they thought of renting televisions to college students. “I had a good feeling that there was a need for it,” says Fahey, an economics major. “Wheaton has a lot of international students, and when everyone’s moving out, a lot of them end up having to throw away valuable stuff because it’s such a pain to ship it back home or try to sell it. We thought, people rent micro-fridges; why not TVs?” He and Pirrello established a partnership with electronics producer VIZIO and launched CampusTVs in fall 2012, starting at seven schools, including Wheaton. The next year, they expanded to 50 colleges nationwide. This fall, they expect to rent to students at 300 institutions. CampusTV partners with a national moving and storage company that delivers the TVs to campus for move-in, and campus reps install the TVs. It’s a business model that seems to be working. As noted in an April 2014 BostonBusinessJournalarticle, CampusTVs has attracted $2.2 million in funding from Boston investment firm Nauta Capital—money that is helping CampusTVs expand its workforce and relocate from a small office in Weston, Mass., to a larger place in Boston. It’s also enabling Fahey, the chief operating officer, to finally take a salary. So what has he learned from this venture? “The most important skill when starting or running your own business is the ability to problem solve. Every day I’m solving hundreds of large and small problems,” he says. “At Wheaton I took a wide variety of classes that taught me to look at problems through many different lenses. I believe that skill has carried over to my business career and allows me to be a better leader.”