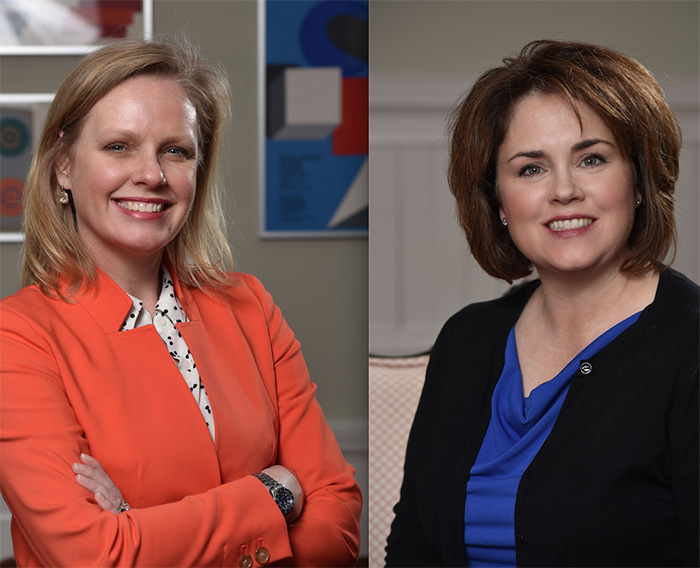 Laprey, who joined Wheaton on January 25, has more than 16 years of experience in higher education advancement—including at Providence College and Brown University. She brings expertise in prospect management and research, major gifts and the annual fund, and also has a strong background in staff and volunteer management. She earned her bachelor’s degree at Saint Anselm College in New Hampshire.

Shurtleff joined Wheaton on February 1 as the new director of alumnae/i relations. Prior to taking on this role, she spent more than 17 years working within alumnae/i relations at Harvard, both in the business school and in the college. During the last eight of those years, she served as director of college reunions and reports, handling the engagement and programming needs of the alumnae/i community. She received her bachelor’s degree in accounting and business administration from Saint Michael’s College in Vermont.

“Courtney and Amy bring decades of experience to Wheaton as alumnae/i relations and annual giving professionals,” said Jane Martin, president of the Alumnae/i Board of Directors. “What means the most to me is that they both started at Wheaton together and have already forged a partnership that will serve alumnae/i and help us to foster engagement, a vital aspect of the college’s new Strategic Plan, and to meet the needs of our students by growing the Wheaton Fund. This is a new ‘dynamic duo.’”

Laprey first became interested in the Wheaton Fund director’s role after speaking with Merritt Crowley, vice president for college advancement, about the position.

“Her vision, in concert with President Dennis M. Hanno, made the professional jump hard to resist. It appeared to be a great opportunity for me to share my own professional experiences and be part of their team in an effort to support the educational experience at Wheaton,” Laprey said.

“It’s great to be a part of a community that knows how to work hard and play hard,” she said, noting the fun traditions and lore, including the love of Cowduck and the Head of the Peacock race, as well as the hard work of students, who, in addition to their coursework, lead entrepreneurial workshops in Rwanda, engage in internships and participate in many extracurricular activities.

“I am excited to join with Wheaton alumnae/i, parents and friends to provide the necessary resources for today’s students and faculty through the Wheaton Fund. We have an opportunity to make a huge impact by joining together to support the college,” she said.

Outside of work, Laprey said her life revolves around her two boys, ages 7 and 5.

Shurtleff said she also looks forward to helping Wheaton realize the vision and strategies set forth by President Hanno. “I want to be part of that journey,” she said.

In her new role, her main priority is fostering connections within the greater Wheaton community, including finding new ways to connect alumnae/i to each other. “Students are our future alumnae/i, and we want them to feel part of the alumnae/i community from day one,” she said. “We have a rich and vibrant group of alumnae/i, and my office will work to create programming that meets their needs as their needs grow and change.”

Wheaton’s sense of community attracted Shurtleff to the position.

“I’ve been in alumnae/i relations for 18 years but haven’t worked on a campus for more than 12 years. As a resident of Norton and a staff member at Wheaton, I hope to connect students to the Norton community and vice versa,” she said.

Shurtleff is also a mother of two boys, ages 10 and 8. “They keep me running so much that I have recently completed two marathons,” said Shurtleff, who also recently competed in team and individual triathlons.